Ricker, the current provost and vice president of academic affairs at Hood College, lead a presentation and question and answer session Monday afternoon in upstairs Lakeside. 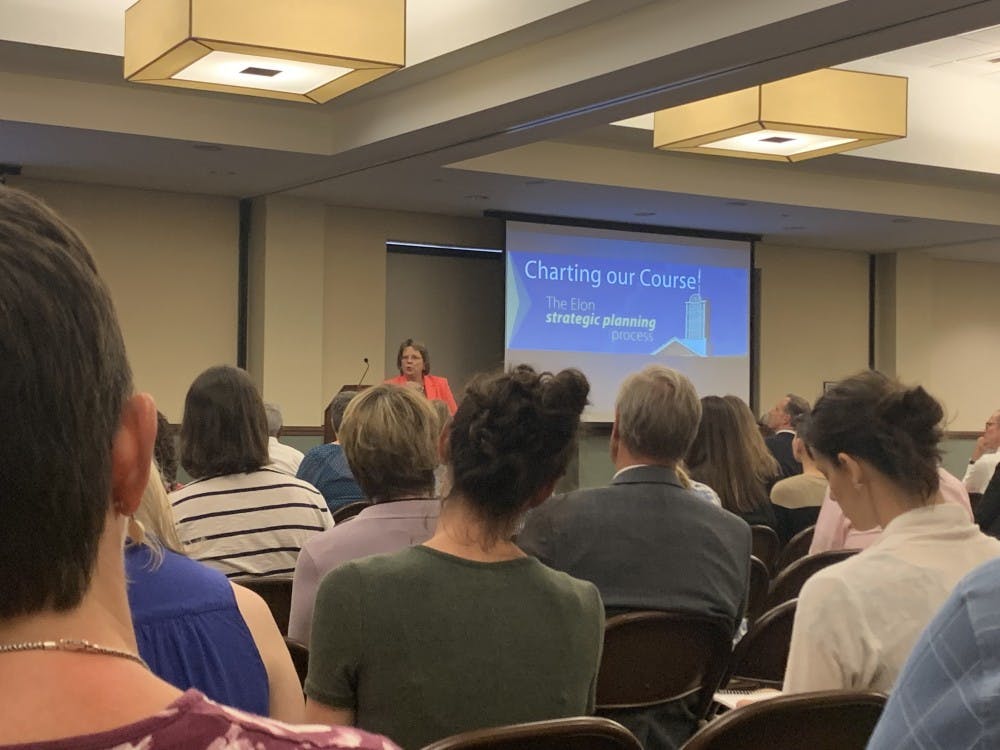 Debbie Ricker, the current provost and vice president of academic affairs at Hood College, presents during her visit to Elon University on May 20. Elon is expected to recommend a provost candidate to president Book after graduation.

In response to the prompt given to each provost candidate, Debbie Ricker drew inspiration from Connie Book's inauguration speech during her presentation as a candidate for the next provost at Elon University Monday afternoon.

Ricker, the current provost and vice president of academic affairs at Hood College, was the third and final provost candidate to speak at Elon. Ricker lead a presentation and question and answer session to a large and interactive crowd in upstairs Lakeside.

Ricker’s presentation revolved around a central theme from Connie Book’s inauguration speech: “always becoming.” Ricker said she chose to address the prompt this way, because provosts “typically draw inspiration from the president.”

Ricker began the afternoon by individually greeting members of the audience. Once the program formally started, she thanked the Elon community for being deeply invested in the position and process of finding a new provost and for being an inspiration through her professional career.

As an example, Ricker referenced her work at York College, where she helped reconstruct their general education program. When re-doing the curriculum, she looked to Elon for inspiration.

During the question and answer session, Missy Mellinger, assistant director of auxiliary services, asked where else Ricker had drawn inspiration from during this re-structuring and what new ideas she could bring to Elon. Ricker said she is currently using ideas she learned at workshops put on by the National Society for Experiential Education and the Association of American Colleges and Universities.

Ricker also addressed the main challenges she sees emerging with higher education in the twenty first century. Ricker said that transfer students at Hood College are increasing every year because students in Maryland are taking advantage of two years of free community college. For institutions with curriculums built on a first year to fourth year type path like Hood and Elon, Ricker said plugging transfer students into the mix can be difficult.

When asked to give a solution by director of the Elon core curriculum Amy Johnson, Ricker said she wished she had a concrete answer.

Associate professor of education Mary Knight-McKenna asked Ricker how she would bridge the gap between the Alamance County community and the university. Knight-McKenna said the community “very close to our doorstep” is experiencing a lot of poverty and the Alamance-Burlington school district is considered to be of high poverty status.

“That’s a mission that is centrally important to me as a person, as a citizen and as an academic professional,” Ricker said.

In response, Ricker referenced her work at Hood College where she helped students, faculty and staff grow gardens at a variety of organizations including the Boys & Girls Club and the Religious Coalition for Emergency Human Needs bringing the separate community resources together. She said she would leverage the service-learning requirement at Elon to more benefit the community.

To conclude her presentation, Ricker thanked the Elon community one more time.

“Thank you for always becoming,” Ricker said. “I hope I’ll be coming.”

Ricker's visit to campus concluded candidate visits. According to the Elon University website, the committee hopes to make recommend a candidate for the position to Connie Book after Commencement. Dr. Jason Osbourne of Clemson University, who was supposed to visit campus Wednesday, is no longer a candidate.

All candidates were asked to prepare a presentation answering the prompt, “As Provost, how would you leverage the fundamental features of an Elon undergraduate, graduate and professional education that would position the institution to meet the challenges and opportunities of higher education in the 21st century?”