Three women take the reins of SGA's executive board

After all-male leadership, these women launch into the new year. 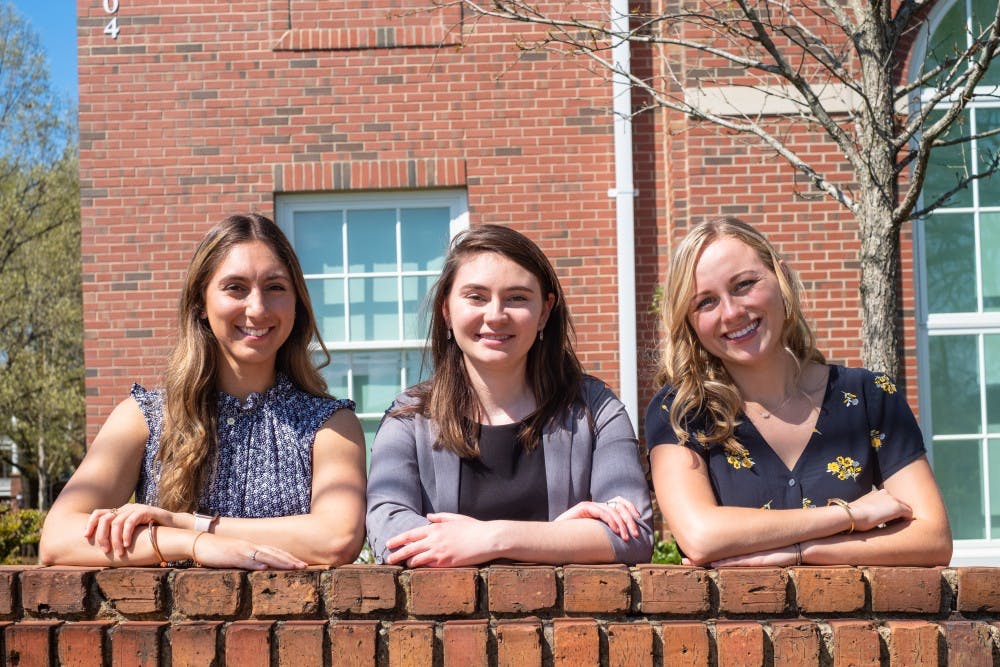 In 1913, Elon University SGA elected two women to lead on the executive board. But also in 1913, despite the efforts of suffragettes worldwide, women did not have the right to vote.

While these women did not vote in American elections, they were elected democratically by their student government. Though they did not represent themselves, they represented their peers.

Now 106 years later, Elon is still electing women to lead. This year, three members of SGA’s executive board are women — Executive Vice President Louisa Sholar, Executive Secretary Julia Field and Executive Treasurer Amanda Yaffa. Their experiences as women in SGA have not only shaped how they lead but also how they hope to guide Elon into a new era, just as women in SGA might have hoped in
years past.

Ahead of their time

SGA elected the first two women to its executive board 106 years ago in 1913.

As freshmen, Sholar, Field and Yaffa came into SGA positions that whet their appetites for the positions they now hold though at times they were intimidated by what Field calls a “hard learning curve” when joining the
organization.

Sholar, who joined the Academic Council, said the beginning of her SGA career was a particularly challenging transition since she was “shy and soft-spoken to begin with.”

While at meetings, Sholar, who sat between two of her male counterparts, would notice them “speaking up more frequently and more quickly than [she] could even form a thought,” which made her feel that she was “not fast enough” and “not good enough, really, to participate in this level of conversation at the rate that they are.”

Sometimes, Sholar said, they would even hold conversations across her.

“It was very clearly their sort of arena,” Sholar said.

Field and Yaffa, who joined SGA at the same time, also said their initial experiences were intimidating though they do not attribute that to a gender disparity.

“The first business meeting I remember being very overwhelmed,” Field said. “I don’t know if that had to do with gender or not.”

According to Yaffa, it takes time throughout freshman year, “regardless of gender, to feel comfortable on the senate, and some people are more outgoing and more willing to talk than others.”

This is an area in which these women would like to make a difference, according to Sholar.

“That’s something that I want to keep in mind as VP,” Sholar said. “I think we can do a better job about having consistent training schedules, it really does take practice.” This is why Sholar aims to incorporate training meetings into each month’s schedule.

“I don’t want anyone to feel like they have thoughts or opinions and just can’t get a word in edgewise,” Sholar said.

Sholar, in what she calls an “R.B.G.-esque” vision of SGA’s future, says she also hopes to see a completely female senate or executive board somewhere down the line.

Field agrees hearing more voices in SGA would be beneficial. She wants to see “members from diverse backgrounds and upbringings but also people who are involved in lots of different things on campus … who all share the same goal of making Elon a better place.”

To Field, this diverse senate would help create substantive change.

“I would like to come back to SGA in 40 years and definitely be able to see here are tangible things, tangible initiatives that have come out of SGA that have genuinely improved the lives of students or brought more togetherness within the student body,” Field said. And Yaffa agrees.

“I would love to come back and feel that sense of family or community within SGA,” Yaffa said.

But the road to an ideal future for SGA is long, according to Sholar.

“We are really struggling, I think there has been a lot of progress towards like this idea of unity, but I think there’s still a lot of incidents, like the one in January,” Sholar said, referring to an incident in which a whiteboard in the Koury Center was defaced with offensive imagery.

While Sholar believes an ideal future has not yet been achieved at Elon, she said there are measures being taken by SGA to change the organization and Elon itself.

“We reviewed the constitution last term with the prior administration, and we made some changes in order to allow more people to serve in the senate and on committees,” Sholar said.

"Hopefully, seeing women in these offices would inspire younger underclassmen women to be able to achieve these positions and to know it doesn't have to be something that is reserved for men."

Field added that sporting events and school spirit have been major topics of conversation in SGA.

“I think that that’s something that could really unite the student body,” Field said, remembering the “huge success” of tailgates this past fall. “It didn’t matter who you were — like you were invited to a tailgate, and you had the same opportunity to stand on Bank of America Drive and hang out with people and play bean bags like every other student on this campus.”

Going forward, Sholar, Field and Yaffa hope to inspire younger women at Elon to strive for success within SGA or in other organizations.

“Hopefully, seeing women in these offices would inspire younger underclassmen women to be able to achieve these positions and to know that it definitely is attainable, and it doesn’t have to be something that is reserved for men,” Field said.

In the new SGA legislative year, Yaffa said she wants to “inspire other people to not view it as male or female but as hardworking individuals that can do this.”