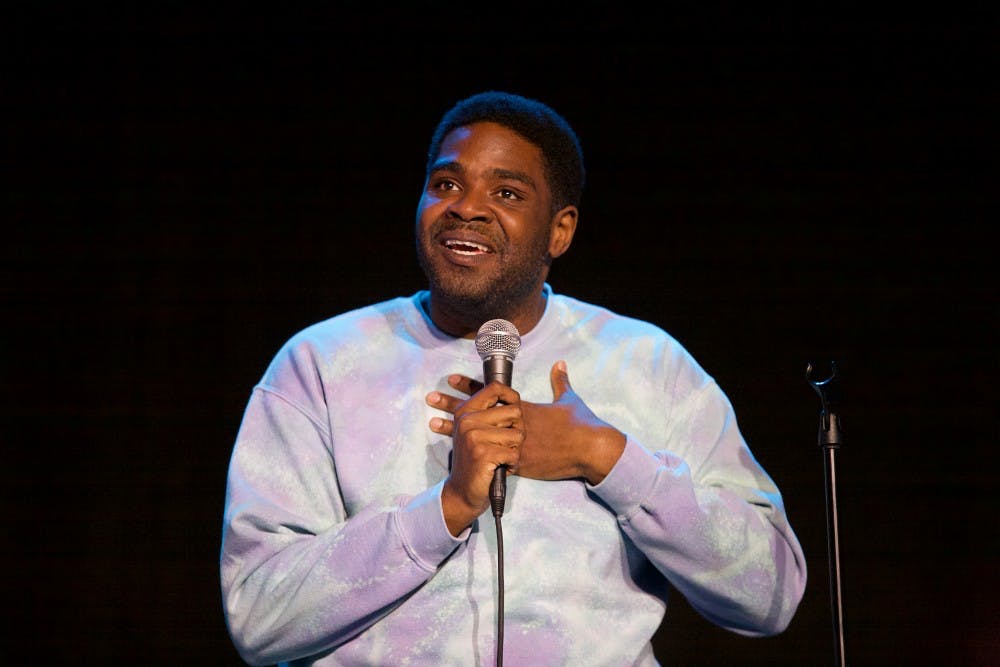 
Standup comedian Ron Funches performs for the Elon University community on Wednesday, April 10, in Alumni Gym. Funches is the first black comedian headliner the Student Union Board has hosted.

Throughout the hourlong show, Funches gave audience members an organic look on his 140-pound weight loss journey, being a single dad to an autistic son, his favorite reality TV shows and his life as a black male. He often laughed at his own jokes, sending his infectious laughter across the gym.

Senior Kenneth Brown Jr. said he enjoyed the black humor Funches included in his act because he was able to resonate with it. “I thought it was funny,” Brown said. “I think some people may not have liked some of his content, but in the comedic world, it is what it is.”

When choosing the comedian, Erin Eady, SUB’s performance chair, said SUB looks for performers who will resonate with students. Funches is the first black male performer, a single father to a child with autism and an active member in the LGBTQ community. Eady said she hopes students can connect with him.

Eady said overall there was a positive student response to bringing Funches to campus. “I think there are different groups on Elon’s campus who maybe felt they aren’t represented in shows we’ve brought in the past,” Eady said. “Feedback has been that they walk away from shows saying it was a good show but they don’t remember it. I think Funches will be a memorable experience, and we’re reaching a lot of groups we haven’t reached in the past.”

Most recently, Funches' standup comedy has garnered attention through the premiere of his Comedy Central Special, “Giggle Fit,” which aired in early January. This was his first full-length special, which showcased his ability to captivate audiences through lighthearted, upbeat humor.

Funches has performed on TBS’s Conan O’Brien Show and NBC’s The Tonight Show with Jimmy Fallon. He has also appeared in several television shows, such as “The Goldbergs,” “New Girl” and ABC’s “Black-ish.” He has had recurring roles on Comedy Central, such as “Drunk History,” “The Kroll Show” and “@midnight.” His voiceover credits include “Bojack Horseman,” “Adventure Time,” Bob’s Burgers,” “Home” and the DreamWorks animated film “Trolls.”