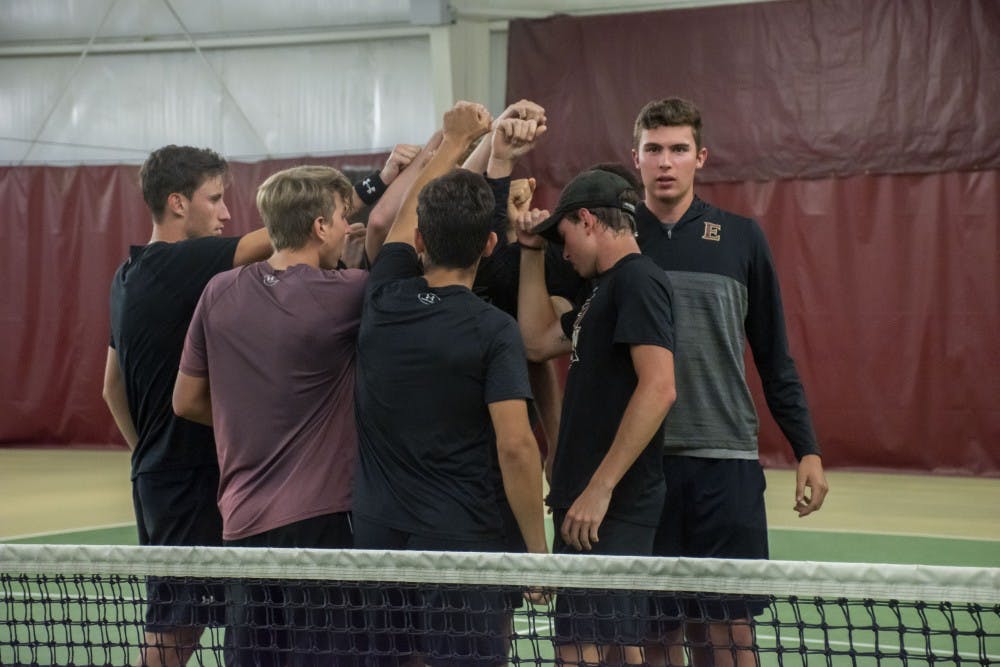 Photo by Caitlin Rundle | Elon News Network
The men's tennis team prepares for their match against the College of William and Mary in the CAA semifinals.

Elon Universty's women’s and men’s tennis teams both played the College of William and Mary Tribe in their semifinals matches of the Colonial Athletic Association tournament. The women lost their match 4-3 while the men won their match 4-2, thanks to the clinching win from senior Taylor Foote.

William and Mary won the first doubles point of the women's match to put the team ahead in overall scoring 1-0.

Everything then relied on the No. 6 match, where Phoenix freshman Nicole Shiau played Tribe junior Charlotte Madson. Shiau put up a fight after Madson cruised past the first set, but couldn’t keep up. Madson took the clinching point and ended the Phoenix season for women’s tennis.

This is the second time this year that the women’s team played the Tribe, previously losing 5-2.

The men’s team seemed to have a little more luck against the Tribe, winning 4-2 and claiming their spot in the CAA tournament finals against No. 1 seed University of North Carolina Wilmington.

Though they came out with the win, the men’s team started off shaky, losing their doubles matches and a chance at the first point overall.

The Phoenix’s first point would come from sophomore Kyle Frankel in the No. 4 spot, followed by fellow teammates seniors Mario Paccini and Felipe Osses-Konig.

The No. 1 spot was filled by Felipe Sarrasague and his opponent, Tribe sophomore Sebastian Quiros. While the first set was kept close, the second set was an easy win for Quiros, and the Phoenix were up 3-2.

No. 5 and No. 6 matches began as Sarrasague finished up his match, and it became a race to see who would finish faster, and for which school.

Enter senior Taylor Foote in the No. 6 spot.

Foote has yet to lose a singles match this year, and he was not about to let the semifinals of the CAA tournament be his first.

“The best thing to do is not worry about the win or loss but to just play your hardest. I just tried to focus on my part, and that’s exactly what I did,” Foote said.

Foote would finish his match in straight sets, 6-1, 6-4, and would secure the Phoenix's spot in the finals of the CAA tournament.

The Phoenix are appearing in their first ever finals match, playing the University of North Carolina Wilmington Seahawks at 2 p.m. at the Jimmy Powell Tennis Center. The winner of this match moves on to NCAA Regionals.