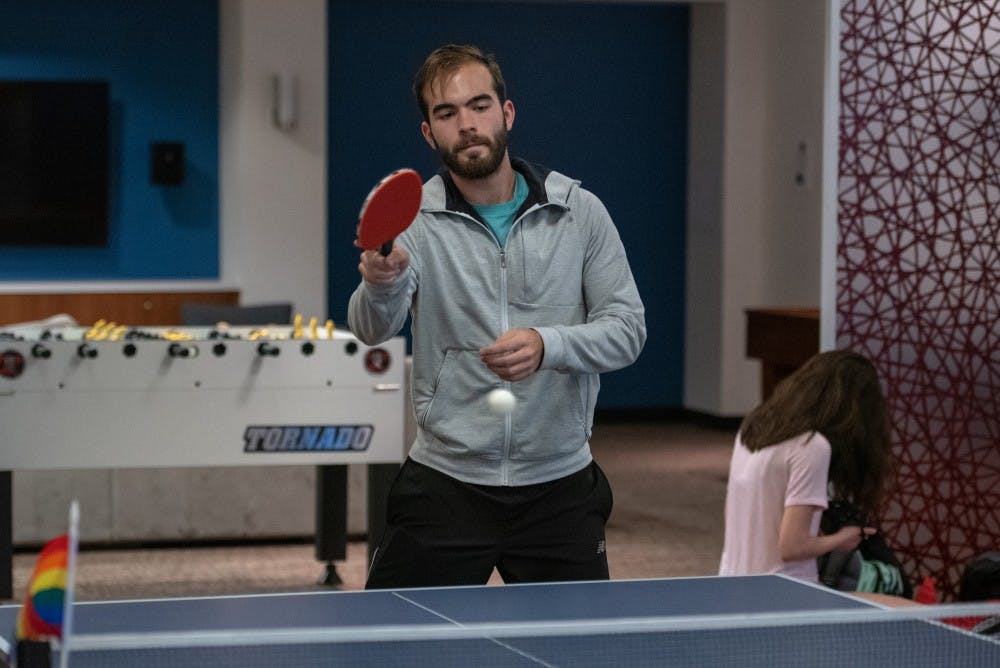 Junior Steven Mei and sophomore Adam Behrman met when they both competed in the fall 2018 intramural table tennis tournament hosted by Elon University. Now, they not only consider each other good friends, but they are also now teammates after creating the university’s first Club Table Tennis team together.

“I saw Adam practicing with a friend and asked, ‘Could I hit some with you?’ and I could tell that he had some training like me, but that’s where we really started to hit it off and play table tennis together,” Mei said about the first time he remembered meeting Behrman. “We just got together and started playing a lot, and we were like, ‘Oh, we should start a club,’ and here we are.”

Table tennis is something both members are passionate about and were excited to become more involved in on campus in a more competitive manner.

“I’ve been playing with my parents in my basement my whole life, and I originally met with Steven at a tournament that must’ve had 30-35 people just to play and 20 other people were just showing up to watch,” Behrman said. “I was like, ‘There’s already a huge following of table tennis here. We should start a club.’”

Behrman then went to President Connie Book and told her about his and Mei’s vision to form a table tennis team. President Book was so thrilled by the idea that she agreed to become the team’s faculty advisor.

“It’s kind of surreal. When you talk to her kind of like a friend, it is a very respectable relationship because you have to understand that she has a very prestigious title,” Behrman said. “But on the ping pong field, it’s almost like we’re equals.”

With not only the permission from Campus Recreation and Wellness to form the team but also the approval from President Book, Behrman and Mei were then faced with the challenge of how to get more people involved in the club when most had already committed to other organizations.

“I knew it would be really tough because people are already involved in other organizations, but the executive team was aware of that, so we try to focus on events,” Behrman said, echoing Mei.

In that spirit, Behrman and Mei thought it would be a good idea to cohost a Club Table Tennis tournament similar to the one that brought them together. This tournament, they said, would be open to all students and faculty and serve as a opportunity for current members to make new connections and help grow the team. With help from the rest of the executive officers, they scheduled the club’s first tournament to take place at 2 p.m. Friday, April 19, in the Moseley Center.

Both Behrman and Mei are proud of the work they’ve put into the team and the memories they’ve made so far in the club’s first semester.

Mei still recalls the day they received new tables before practices started in the Koury Center Concourse. “When we got new tables for Koury practices, Adam and I were really happy about it because we realized that this was becoming an actual thing,” Mei said.

For Behrman, he holds the first practice close to his heart. “Seeing all of the work that was put in over a few months and all of the advertising and getting tables and all of this planning — to see it all come together during this practice and having all of these people come out just to play ping pong was really unreal,” Behrman said.

Looking beyond their first tournament, Behrman and Mei are excited about the potential of the club and what they hope they can accomplish next year.

“I would like to have more people to come out to have fun and develop as players,” Mei said. “Right now, we have a core group of players that play consistently, but I would love to see that number grow and have more people become passionate about playing.”

"When you can reach people in a way that makes everyone enjoy and respect one another, it creates a lot more open dialogue. i've really seen that over the ping pong table more than anywhere else. "

Behrman also hopes to see more people come out and play, but he stressed the value of making connections with people he wouldn’t have otherwise.

“When you can reach people in a way that makes everyone enjoy and respect one another, it creates a lot more open dialogue,” Behrman said. “I’ve really seen that over the ping pong table more than anywhere else.”