What's next for men's basketball

After Matt Matheny departs from Elon, who will take over as head coach? 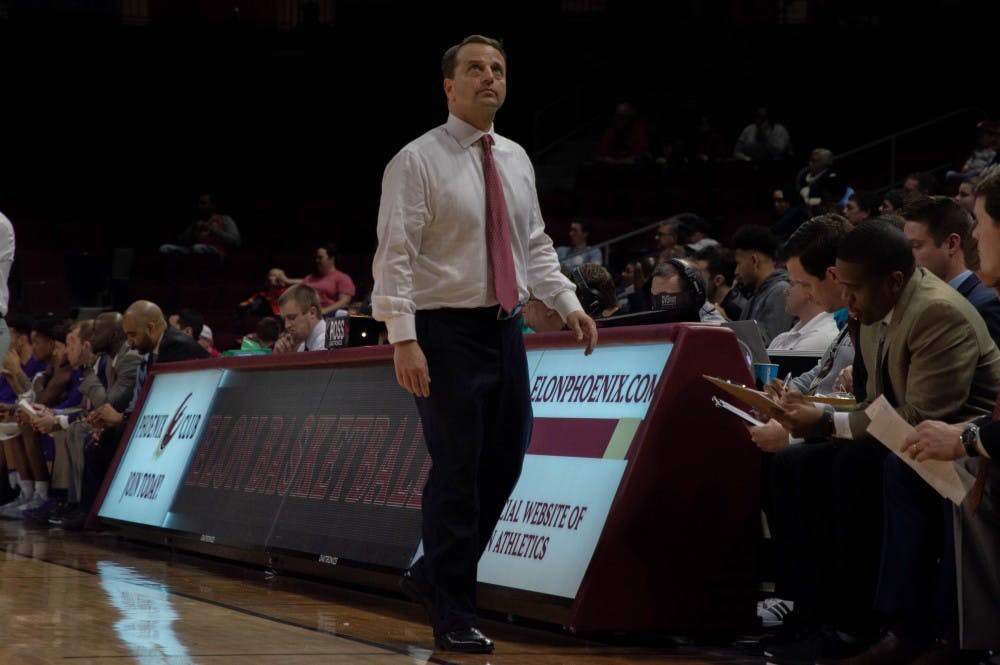 After a decade at the helm, men’s basketball head coach Matt Matheny was fired on Monday afternoon. This followed an 11-21 (7-11 in CAA) season and a fourth straight exit from the Colonial Athletic Association in the first round. Matheny guided the Phoenix into its new conference five years ago as it transitioned from the Southern Conference into the CAA today.

is the number of wins Matt Matheny earned at Elon all-time, ranking third in program history, just 10 wins away from second all-time.

Matheny is leaving Elon ranked third all-time in wins as head coach, just 10 wins behind Graham “Doc” Mathis. It is still so clear that Elon’s program struggled as half of Matheny’s seasons finished with losing records, yet he was still one of the most successful coaches at the helm.

So now that Matheny is gone, what options does Elon have to fill his role?

Shaver coached 16 years at fellow-CAA school The College of William and Mary before meeting the same fate Matheny did at the end of the season. He had some moderate success in the CAA over those 16 years. Not only does Shaver lead the Tribe in all-time wins, but he also coached the team to two National Invitational Tournament (NIT) berths in his time in Williamsburg.

A hire from within the conference could do a lot of good for the Phoenix, who would benefit from someone coming in with a great amount of in-depth knowledge about the league. Shaver posted three straight seasons with 20 wins from 2013-14 to 2015-16 and had five straight winning seasons before being handed his pink slip. It seems like someone who had found success may not want to pass up the offer to return in-conference and show the team that fired him they made a mistake.

Taking Shaver off the market may be self-serving for the Phoenix as well. Shaver is 8-3 over the last five years against the Phoenix, including beating Elon twice in the CAA Tournament.

A name probably not familiar to those outside of fans of George Washington University, Joseph got just three seasons into his tenure with the Atlantic-10 team before he was kicked to the curb. Granted, the team had a dismal 9-24 record this year, so it may very well have been justified.

But Joseph was able to lead the Colonials to a 20-win season his first year and a respectable 15 wins last year. He even won a conference tournament game this year, something the Phoenix have not done since 2015.

Coming from the A-10, a very similar conference to the CAA in terms of its standing as a mid-major and both of their reliance on a deep recruiting class rather than a four- or five-star recruit to lead the way, Joseph may be a nice fit for Elon.

One of the things Joseph will bring to the table is an understanding on how to recruit in crowded areas. Coming from the Washington, D.C., metropolitan area, Joseph needed to find a way to lure away recruits from places like Georgetown University, the University of Maryland and even the slightly farther-reaching Virginia Tech and Virginia Commonwealth University. Joseph would meet a similar challenge in the over-saturated basketball state that is North Carolina.

With someone who was able to build and coach a team in a dense city that was able to compete within its conference, Elon may not be a bad stop for Joseph.

For those unaware of Pitino’s background, it is certainly one of both highs and very, very lows. If Pitino’s life stopped at the edge of the hardwood, he would be one of the most revered coaches to ever hold the position. But unfortunately, his off-court antics led to a tsunami of poor decisions.

Pitino is the only head coach in NCAA history to lead three different teams to a Final Four appearance, including winning a national title once in 1996 with the University of Kentucky. He also won with the University of Louisville in 2013, but that’s where things took a turn. In 2017, Pitino was suspended for five games by the NCAA for lack of oversight in a 2015 scandal involving prostitutes. He was also later implicated in an investigation into recruits being bribed to play for Pitino.

While morally flawed, Pitino’s coaching abilities are unquestionable. He is currently in Greece coaching Panathinaikos B.C., a far stretch from where he was even five years ago. Pitino may well want to return to college basketball, and Elon could be a viable place for him to do it. If Elon could win him over and get him to come coach the Phoenix, it could be mutually beneficial.

Elon would get instant media exposure and an increased recruiting edge because of who Pitino was before all of the reprehensible actions were brought to light. Elon would get an undeniably good coach and maybe even the boost they need to really be taken seriously. And Pitino would get a fresh start.

Though it would be a frenzy, the media storm would calm down eventually, and Pitino would get the chance to coach again. Elon would keep a very tight leash on him and a watchful eye to make sure nothing happens under his tenure, and Pitino’s hypothetical stint as a head coach for the Phoenix would be seen as a rehabilitation stop on the road to what could be a triumphant return.

Could this happen? It’s not at all likely. Should this happen? No. Probably not. But with how dark the past week has looked for Elon men’s basketball, why not take a second and ask the silly questions that may yield silly answers?

Shaver seems to be the runaway favorite for this job — at least he makes the most sense on paper as long as the money is right. But this hiring is going to be critical because of who they need to replace. Matheny, though he struggled on the court, was the right guy for this job. He was a leader, a teacher and a mentor for the kids who played for him. Elon needs to find the right fit for the institution.