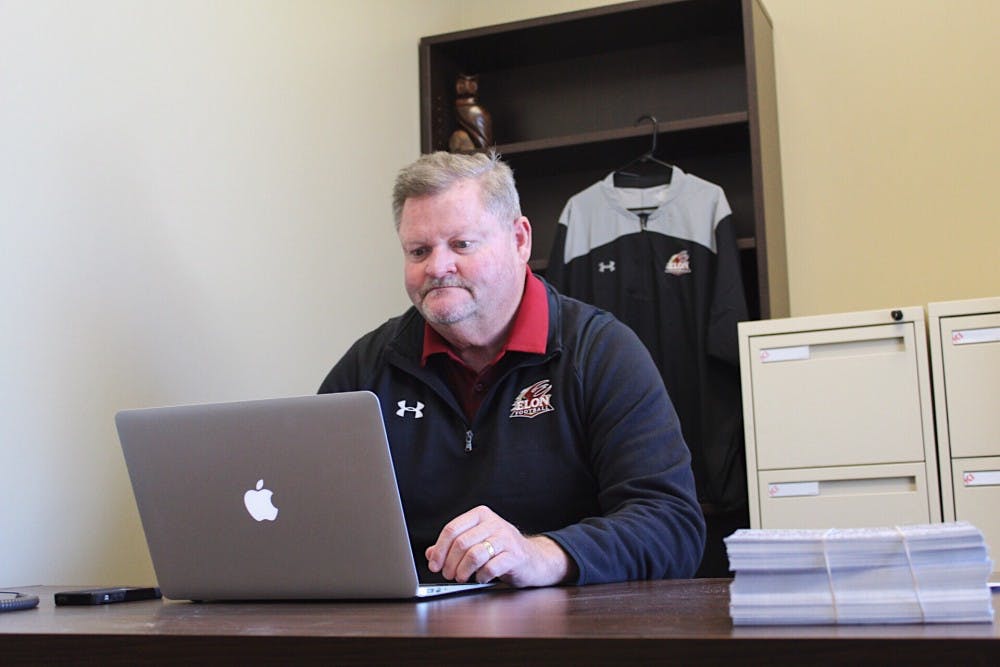 Hal Capps has been coaching high school football in the Carolinas for over 30 years and is now making the leap to the college level. Capps is the new director of high school relations for Elon University football and is responsible for recruiting future Elon football players. Capps has a message for the students he will be recruiting to Elon.

“I want to let them know that Elon is available for the student-athletes that have great academics, that are Division I players, that they think of Elon first when they talk with that young man about his choices of colleges,” Capps said.

Capps has had success in his high school coaching career, with over 200 career victories. The bulk of his success came as the head coach of Western Alamance High School in Elon, where he coached from 1992 to 2010 and won a state championship with them in 2007. Capps says it “feels awesome” to be back in the town of Elon.

“My wife’s family still lives here. My sister lives in Greensboro. With us being so far away, we never got to spend much time with them, except during the holidays,” Capps said. “So now it is going to be a lot different. Reunite with some of those friendships.”

As part of Capps’ new job, he will work with many high school coaches in the area, which Capps said will be one of his strengths.

“When you are in North Carolina for 32 years as a football coach, you build a lot of relationships with high school coaches, assistant coaches who are now head coaches. So I think that is one thing that I’m really going to bring to table for Elon University,” Capps said.

Capps’ relationships with high school coaches is not the only trait he brings to Elon. His ability to mentor players will be a key addition to the coaching staff as well. In a press release announcing Capps’ hiring, head coach Tony Trisciani talked about Capps’ coaching career and his future at Elon.

“Coach Capps has been a highly successful football coach as well as an impactful mentor for young men, and I am confident he can help us win football games,” Trisciani said.

Capps also elaborated on what he will be looking for in an Elon athlete. Not only will he look for gifted athletes, but good students as well.

“We have got to look at the student. Is he going to be able to stay in school? Does he have the work ethic? Does he have the study habits? Are we really going to have to stay on him all the time? Is he mature for his age?” Capps said. “There is no need to bring in a superstar when he's only going to be here one semester or two semesters. That doesn’t help our program, and that is not what Elon is about.”

Capps also stresses the importance of trying to get the best out of his athletes, and that includes schoolwork as well.

"I'm a firm believer that you can be good or great at everything. You just have to set your goals, and set your dreams, and work towards them each and every day."

“I’m a firm believer that you can be good or great at everything. You just have to set your goals, and set your dreams, and work towards them each and every day,” Capps said.

The character of potential recruits is also important to Capps.

“I was fortunate enough to be the head coach at the Shrine Bowl, North Carolina Shrine Bowl in 2014. It gave me a glimpse of what recruiting was,” Capps said. “We handpicked players. You can’t do that in a regular high school setting.”

According to Capps, not only will his responsibilities change with his new job, but his workplace attire will be different as well.

“It's unique for me because with 35 years in high school, I came to school every day in pair of shorts or sweatpants and tennis shoes,” Capps said. “You don’t do that anymore. So, for me to get dressed up, it sort of starts my day a little different and makes it more exciting.”

Director of high school relations is not the only role that Capps will be taking on with the football team. He will also work with the special teams unit. He said that he is still narrowing down his specific role, but he believes most of his work will be with the kickers, punters and snappers.

Capps said one of his main jobs will be to mentor players that other coaches may not have time to pay full attention to. Capps wants to make sure he doesn’t let those players slip between the cracks.

“Sometimes, kickers and punters have a tendency to wander off during practice,” Capps said. “They’re not going to wander off when I am with them.”