Errors prove costly in loss against Oakland, offense shows up to put La Salle away early 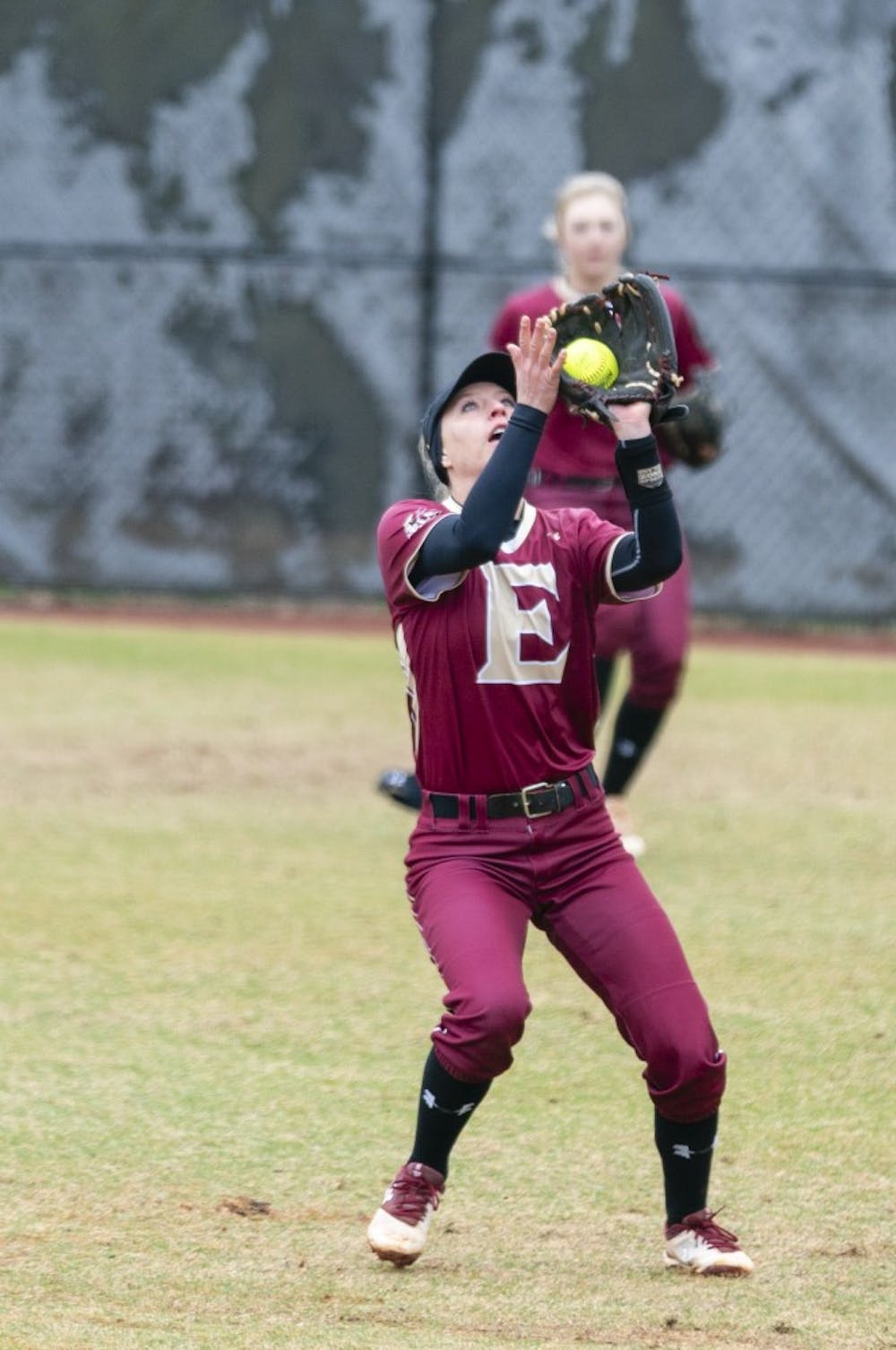 Elon University hosted Lafayette College, Oakland University and La Salle University this weekend in the Elon Softball Phoenix Invitational. Friday's game against Lafayette got rained out, and on Saturday, the Phoenix (8-6-1) lost to the Oakland Grizzlies (4-6) and beat the La Salle Explorers (0-4).

The Phoenix fell in its first game against Oakland 4-5. The last time the Phoenix played the Grizzlies was in 2016 when the Phoenix won 8-0. But this time around, fortune did not favor the Phoenix. Oakland scored first in the third inning off an error at first base, but the Phoenix quickly answered back at their next at bat when freshman outfielder Rebecca Murray scored a home run that brought in two runners to make it a 3-1 game in favor of the Phoenix. But avoidable errors and mistakes would catch up to the Phoenix.

Head coach Kathy Bocock said the reasoning for the five errors they would have by the end of the game was “their mentality — they just have to realize and have confidence that they make those plays every day.”

In the fifth inning, Elon senior catcher Callie Horn had a ball pass by her, which allowed Oakland junior pinch hitter Kayla Marburger to advance to third, who later scored to make the game 3-2, still in Elon's favor. Then, Oakland sophomore Shannon Carr took advantage of a poor throw from third to first and scored to tie the game up 3-3.

The Phoenix were unable to respond in the fifth, and it was once again Oakland’s turn to bat at the top of the sixth. With a man on first, Oakland senior outfielder Kelsie Swanson dropped a bunt, and again the throw down to first flew past Elon senior first baseman Ashtyn Foddrell, which allowed Oakland to regain the lead at 4-3. Swanson then scored herself, and the Elon found itself down 3-5.

Elon senior Erica Serafini, when asked about the errors that cost the Phoenix the game, said, “I think at some moments we were flat and thought ‘Oh, it's the same routine ground ball, just get it and be nonchalant.’ ... No matter who the team is, we can’t play down to their level.”

The Phoenix created an exciting rally in the bottom of the seventh. With two outs, sophomore Ally Repko started off the effort by hitting a double into right center field. Murray, the next batter, reached first off an Oakland throwing error, which also allowed Repko to come home and make the game 5-4. Foddrell hit a comfortable single but pushed her luck and advanced to second, pushing Murray to third.

But the Phoenix wasn’t able to capitalize on the chance it had, and Horn was thrown out at first, giving Oakland the win.

The next game against La Salle was much different than that against Oakland. The Phoenix won 9-0 against the Explorers, with the game ending just after five innings. “I think we had more energy, and we were kind of mad that we had lost the first game," Serafini said. "We kind of just came out clear-minded and attacked every little thing and just had fun.”

The starting roster saw a few changes but for the most part remained the same as the first game. The first inning ended quickly, with both teams showing promise of it being a strong game. Then came the second inning.

Freshman Lauryn Clarke was the first of the Phoenix to get on base and the first of the Phoenix to score, but she would not be the only one. Of the nine players who came to bat, six would score by the time the inning came to a close, and it wouldn’t stop there. In the third, Clarke, freshman Megan White and junior Morgan Reich would seal the deal and add on three runs collectively. The game ended with a fiery strikeout by junior pitcher Abby Barker, and the Phoenix comfortably took the win at 9-0.

Looking ahead, Bocock and Serafini are excited for the potential of the team. Bocock said they just have to keep working on “the game, just the game. We've got to work on everything every day, you know — the base running, the fielding, the throwing and the hitting.”

Serafini agreed and said the team's focus should be on not giving up. "If we’re winning, staying there and working hard and not settling and being still, we still have to fight until the last minute.”

The Phoenix will finish out the rest of the tournament on Sunday against Lafayette, and then the team will play Duke University (7-11) at Hunt Softball Park on March 6.