Elon softball loses to UNCG in the series finale 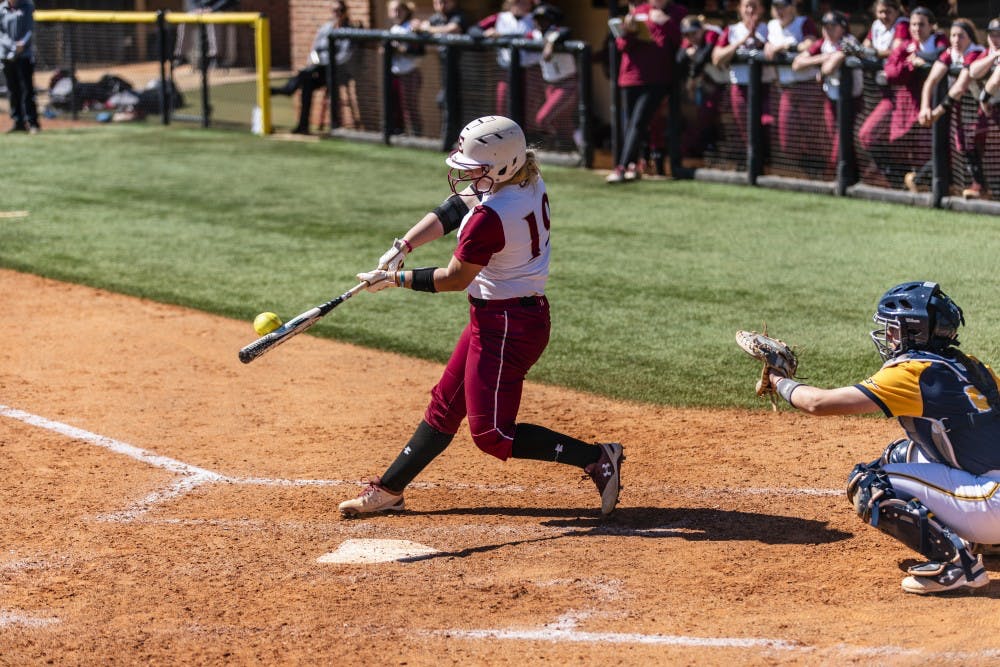 After losing both games to The University of North Carolina at Greensboro in a doubleheader on Saturday, the Phoenix (15-10-1) traveled back to Elon University looking to avoid a sweep. But the bats fell silent in the series finale, and the Phoenix fell to the Spartans 4-1.

UNCG wasted no time scoring. The Spartans put up three runs in the first inning after Elon senior pitcher Hailey Jomp walked the first three hitters, which led to a two-run single from designated player Kayleigh Willis and a sacrifice fly from pitcher Stephanie Bryden.

Jomp settled down for the second and third innings, but UNCG extended its lead to 4-0 in the top of the fourth thanks to an RBI single from UNCG second baseman Melanie Darges. Jomp finished the day with three innings pitched, allowing four runs on five hits and four walks.

Bryden was dominant early in the game, not allowing a hit until the bottom of the fourth inning. Elon sophomore third baseman Ally Repko broke up the no-hitter and led off the inning with a double down the right field line. Bryden went on to pitch a complete game, allowing only one run in three hits and striking out eight batters.

The Phoenix scored its first and only run of the game in the bottom of the seventh thanks to an RBI single from senior designated player Ashtyn Foddrell.

The game was kept in reach thanks to the efforts of junior relief pitcher Kenna Quinn. Quinn stepped in for Jomp in the fourth inning and held the Spartans scoreless for the remainder of the game.

After the game, Quinn talked about her mentality coming out of the bullpen.

“I was mainly trying to keep the ball on the ground. And especially in the infield,” Quinn said. “I trust the defense behind me to work, so I didn’t have to work too hard because they would do most of the work for me.”

The Phoenix found some strength in its solid defense. Among the defensive highlights was junior left fielder Morgan Reich, who made a diving catch to rob UNCG first baseman Marisa Sholtes of a hit to end the top of the sixth inning.

“It’s very important. Especially for a pitcher like me, who doesn’t get a lot of strikeouts,” Quinn said.

Repko said keeping opponents' scores to a minimum is important, especially when runs are few and far between for the Phoenix.

“When we are not hitting as well, we need to try and keep them from scoring,” Repko said. “So it’s nice that we have a strong defense that, even if we make a mistake, we know the person beside us is going to pick us up the next play.”

The three-game sweep marks Elon's third loss in a row — the longest losing streak of the season so far. After the game, head coach Kathy Bocock praised the UNCG softball program.

“UNCG has a great program,” Bocock said. “We have a lot of respect for them.”