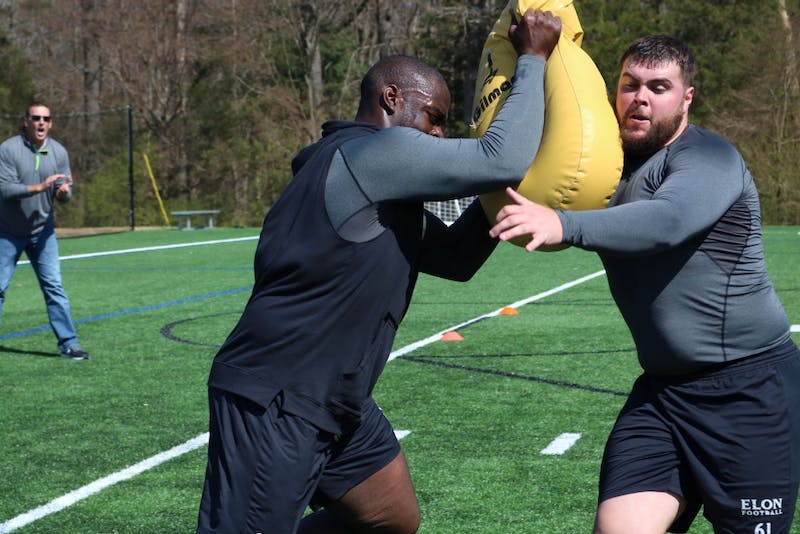 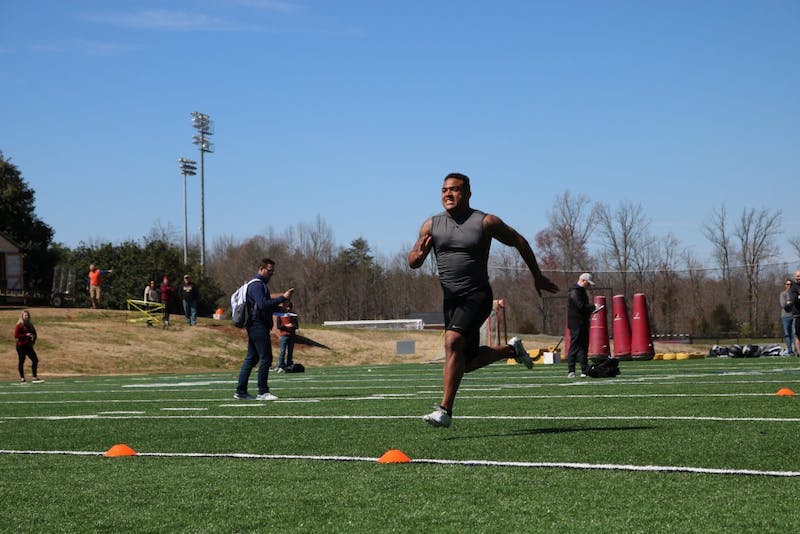 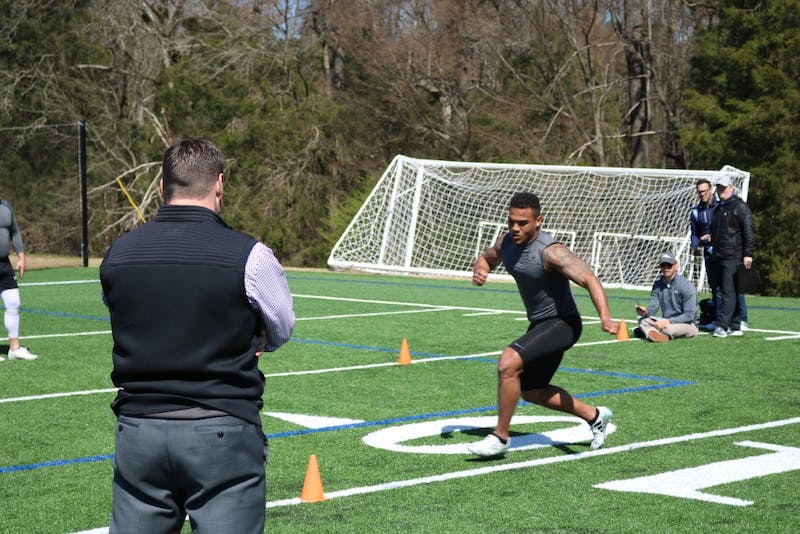 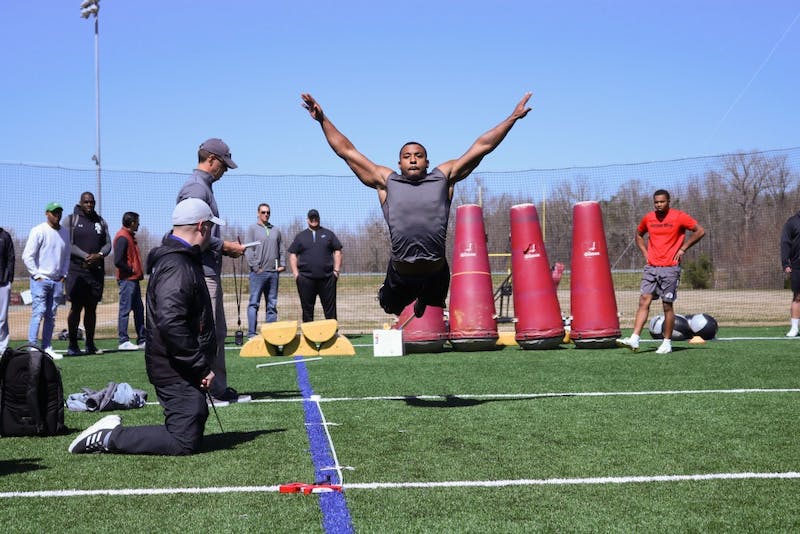 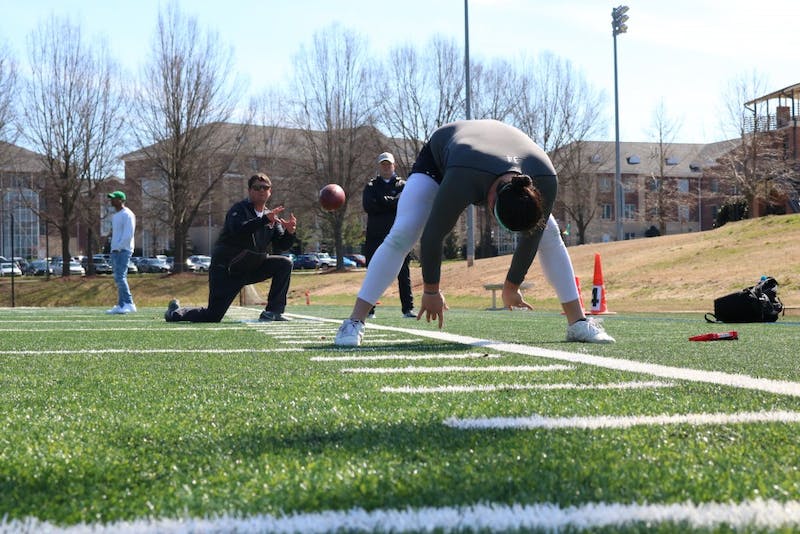 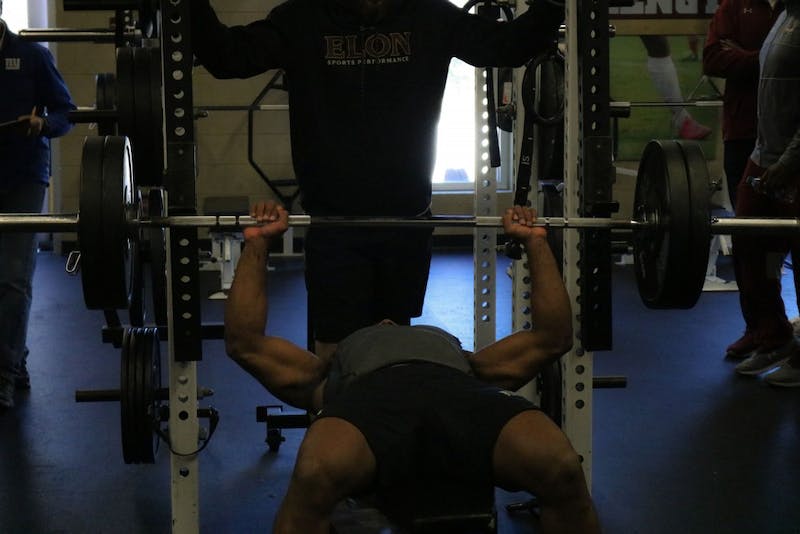 Six Elon seniors — offensive linemen Oli Udoh and CJ Toogood, linebackers Warren Messer and Matt Baker, running back Malcolm Summers and long snapper Nicholas Kavouklis — showcased their athletic abilities before a dozen NFL scouts. For some of these athletes, this was their last chance to be noticed by teams at the next level.

“This is a great opportunity for our guys. This is an opportunity to make dreams come true for them. It's great to see the energy and effort and a chance of a lifetime for these guys,” said head coach Tony Trisciani.

The biggest draw for Elon's football program this year was Oli Udoh. The 6-foot-5-inch, 336-pound offensive lineman was invited to the 2019 NFL Scouting Combine in Indianapolis, Indiana, and played in the Reese's Senior Bowl in January. On Tuesday, Udoh only competed in the three-cone drill, the short shuttle drill and a handful of offensive line technique drills alongside CJ Toogood.

“It was pretty awesome, being able to go to the Senior Bowl, competing with some of the most highly recruited and athletic guys in the country right now and being able to showcase my skills. Being from Elon, it was a really humbling experience going against the better players in our draft class,” Udoh said.

Two time All-American linebacker Warren Messer took the field for all six drills and a linebacker workout during which he showed off his ability to break to and catch opposing passes. His speed was showcased with a 40-yard dash time that ranked him second only to fellow linebacker Matt Baker.

Running back Malcolm Summers faced hardship at the 2019 Pro Day. Summers was only able to participate in the Bench Press drill after not yet being cleared from his surgery-requiring hamstring injury suffered against James Madison University in October 2018. Summers was still able to muster a Pro Day-high 22 reps of the 225-pound bench press. Though Summers was proud of his teammates' performances, he said he is ready to overcome this adversity.

“I was right there with them, yelling and screaming, but it just didn’t feel the same," Summers said. "This just puts another chip on my shoulder to get out here and show what I can do."

“I think a lot of scouts were impressed with me. You know, I didn't get invited to any combine games or combines or all-star games, so I think today was my day to show the scouts that I can work, and I think I really showed out today,” Toogood said.

Nicholas Kavouklis started in every game since his sophomore year as the long snapper for the Phoenix. At Pro Day, Kavouklis participated in and placed last on the stats sheet for all drills except for the bench press drill, in which he did not participate. But Kavouklis was still able to showcase his unique skill of long snapping with individual scouts.