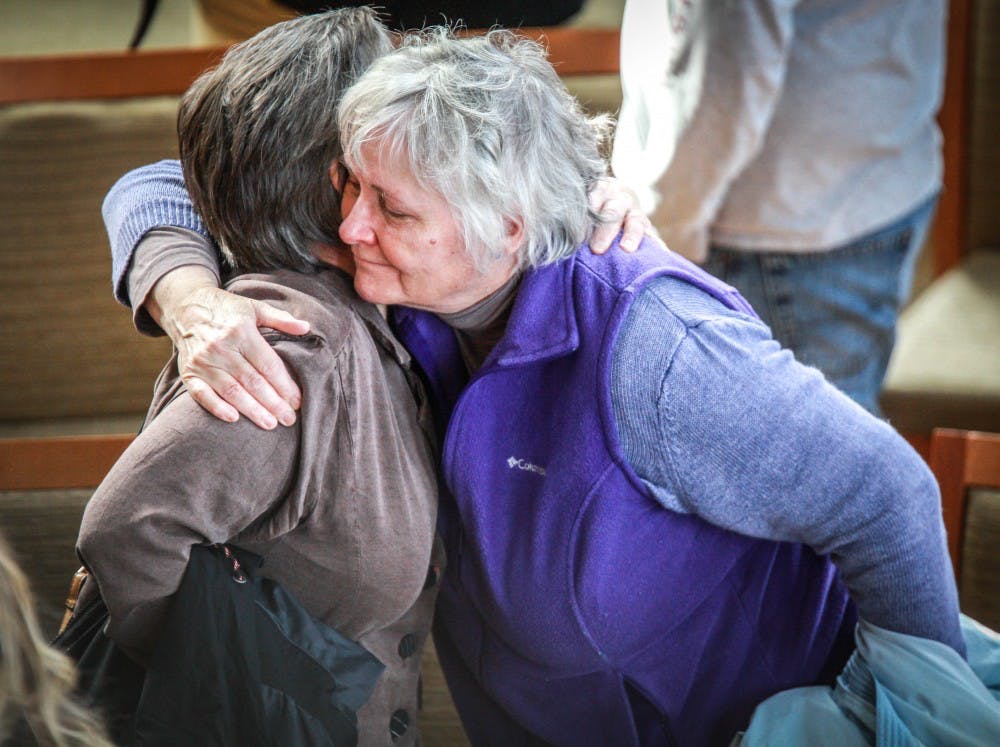 You could feel it as you walked through the doors of Arts West Monday morning. Sadness. Weight. It’s a palpable loss.

The art community at Elon University lost a “ray of light” Saturday night when L.M. Wood, 56, associate professor of art, died in her sleep. Her husband, David Schaeffer, who also taught courses at Elon in the art department, shared the news.

Wood was from Northern Minnesota where she also earned her undergraduate degree in Photography and Handmade Paper at University of Minnesota Moorhead. She then received a Master’s in Fine Art in Photography from The University of Cincinnati where she met her husband in 1991. The two had been together ever since. When Schaeffer described his wife, many thoughts came to mind.

“Fun, happy, what would it be? What’s that saying?” Schaeffer said. “Something like tree-loving hippie, dirt-loving, tree-hugging hippie chick. That was her.”

She loved fancy beer, violent video games and underwater monster films and hated plastic straws. While neither of them ever owned a cell phone, they did own a computer — Wood was self-taught in HTML.

One of her prouder moments though was when she figured out how to make a vegan dessert that was really good, Schaeffer described. She baked, and her husband cooked.

Social media posts from students and alumni flooded news feeds Sunday afternoon as the community learned of the unexpected loss. Junior Hailey Burkett, who is currently enrolled in Wood’s Introduction to Intermedia and Photography course, said the news was unbelievable.

“I really didn’t know what to think because it was so unexpected,” Burkett said. “I didn’t want to believe it because she was so fun in class — she was so lively. I was confused at how it could happen.”

Wood joined Elon’s faculty in 2000, and in an email sent out Sunday afternoon, President Connie Book said, “In her teaching, Wood believed that students are central partners in learning where equal emphasis is placed on technical and formal development and concept building.”

“She was always very encouraging,” Burkett said. “Sometimes I find that professors kind of expect something of you and she came into the class with no expectations and just wanted everybody to succeed no matter where you were at.”

Wood held many positions on campus, some that may have even gone unnoticed. She was an advisor to Creative Resolution, an unsponsored student group that allows students to design commissioned posters, fliers and other promotional materials for various groups on campus. She was also an “enthusiast,” or adviser, for The Edge Magazine, an off-campus student magazine. She helped organize events around Arts West, served as the lab manager, mentored senior capstone projects and ran a website with her husband showcasing their work. Many roles fell outside of her duties as teacher. The list goes on and on.

“She did so much that I don’t think we really think about until the day when all of a sudden … you know I regret that,” said Michael Fels, art professor and chair of the Department of Art and Art History. “I regret that deeply that we didn’t acknowledge that enough.”

“She was the glue of the art department,” said senior Kerry Sheehan-Delany, who took multiple courses with Wood and credits her with helping her rediscover her love of art.

Wood received her Master’s of Fine Arts in Fiber at Southern Illinois University Carbondale. Her work was presented nationally at the Museum of Design in Atlanta, the Center for Craft Creativity and Design in Asheville, N.C., and the North Dakota Museum of Art in Grand Forks. She was awarded a grant from the Kentucky Foundation for Women and a Visual Arts Fellowship from the North Carolina Arts Council.

On Tuesday afternoon friends, students, alumni and colleagues gathered in the Sacred Space in the Numen Lumen Pavilion for a Gathering of Friends to honor her memory. Students recalled moments of Wood’s outpouring of kindness and her faith in their identity as an artist.

Anne Simpkins, associate professor of art, shared sweet memories and anecdotes of her longtime friend. “She was a vegetarian and an anarchist,” Simpkins said. She believed in “animal rights and human rights.” She recalled how she would remove the mice traps around Arts West to save even the tiniest of lives.

“She didn’t believe in afterlife,” Simpkins said. “But she firmly believed in this life.”

Wood could be seen riding around campus in her “Minion” themed yellow car. She and her husband were connected at the hip, Fels said, and lived out in the woods near Saxapahaw with their four cats. Her focuses, though, were her students and teaching.

“She’s an incredible teacher, and Elon swallows us up with the requirements of teaching and scholarship and service and committees, and she seemed really focused on what mattered to her and that was teaching,” Fels said. “Our students flooded to her. She swelled the enrollments of her classes because students followed her, and it’s a testament to how much she cared for them and they cared for her.”

The impact she had on her students will last for decades to come, and her presence will never cease to be felt around the halls of Arts West and under the Oaks around Elon’s campus. Students noted the great care she took in getting to know each of her students.

"Because of her, I chose to pursue the things that I love to do. That is something I can't thank her enough for. "

Monday morning, just as the 8 .a.m. classes were getting underway, a memorial appeared with a vase of flowers over a vinyl sticker Wood had created and placed in the halls of Arts West. A message appeared on a whiteboard nearby: “In memory of LM, you made Elon a kinder, more loving place.”

“She is the reason I became an art student, and if there is anything I will graduate with, it is the confidence knowing that I have nothing to regret,” said senior Kerry Sheehan-Delany. “Because of her, I chose to pursue the things that I love to do. That is something I can’t thank her enough for.”