Mercer struggles to score, Perpignan's efforts not enough to keep up with the JMU offensive front 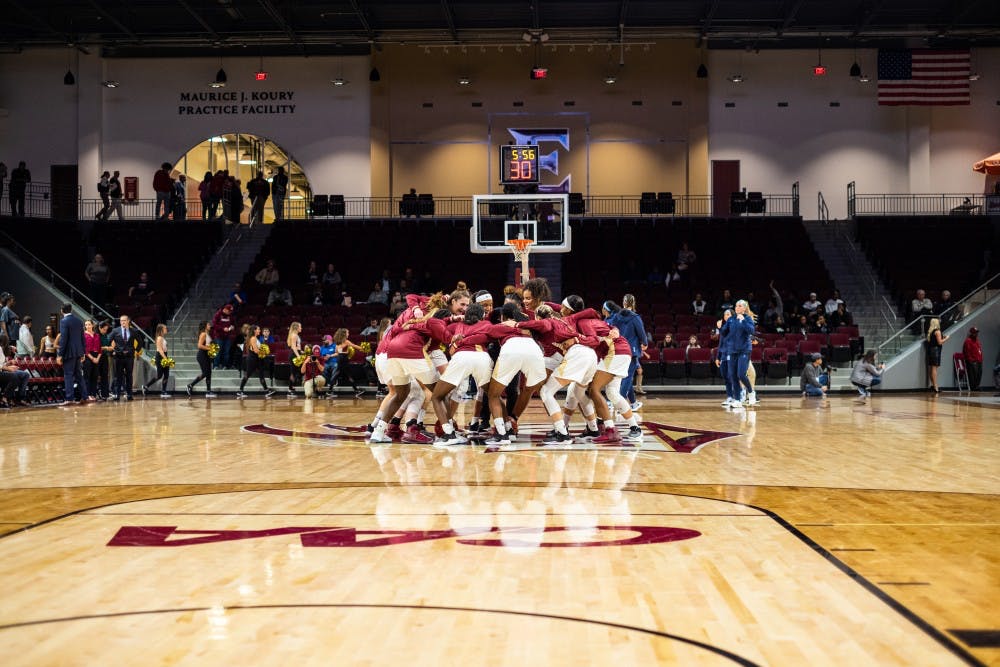 From the start, the Maroon and Gold had trouble matching the proficient James Madison offense. The Dukes outperformed the Phoenix in nearly every category, including shooting percentage where they doubled the Elon’s production 52 percent to 26 percent.

“We have to follow the game plan," said Elon head coach Charlotte Smith. "When you put hours and hours into scouting, film, strategy, you develop a game plan for a reason, so we have to follow it.”

The lack of offense was not helped by the offensive absence of junior guard Lexi Mercer. She had averaged 10.5 points per game following the matchup with the College of Charleston on Feb. 10, where she scored a season-high 22 points. Since then, Mercer has failed to score a single point in two straight games.

Against JMU, Mercer was 0-4 from the field and 0-2 from the three-point line.

“Shots just aren’t falling, but I try to not let it get to me. Just focus on the defensive end," Mercer said. "If my shots aren’t falling, I'm still going to try to benefit my team by playing defense."

From the opening tipoff, the Dukes showed why they are the No. 1 team in the conference. The Dukes jumped out to a 6-0 lead right out of the gate. The Phoenix offense was few and far between, and at the end of the first quarter, the Dukes led the Phoenix 25-9.

In the second quarter, the Phoenix started to show some life on the offensive end of the court with a pair of three pointers from both redshirt-freshman guard Ariana Nance and sophomore forward Jaylin Powell. Nance led the team with nine points in the first half.

Despite the struggles throughout the game, the Phoenix stood toe-to-toe with JMU in the second quarter being outscored only 17-14.

“In that quarter, we were a lot more focused and a lot more intense defensively. That's something we’ve taken pride in the last two seasons. And for this group, this is something we have to buy into,” Smith said.

The Phoenix started off fast in the second half, scoring five unanswered points in the first a minute and a half. But the Dukes' dynamic offense was on full display in the third quarter as they went on 17-4 run leading into the fourth quarter.

With 12 seconds remaining in the third quarter, freshman guard Brie Perpignan sliced through the right lane of JMU defense and sank a basket as time expired. But the damage had already been done as the Dukes held a 63-34 lead.

Perpignan was the team’s leading scorer of the night with 11 points. She also managed to pull down four rebounds, which was the second highest on the team. According to Perpignan, her success was predicated on the system Smith put in place.

“It was my teammates getting me open and executing the plays that [Coach] called for us,” Perpignan said.

The Phoenix will take on the No. 3 Towson University Tigers on Sunday, Feb. 24, in Schar Center. Smith said that ahead of this game the team will focus less on physical conditioning and more on mental preparation.

“It’s going to be another battle of the boards because they are one of the top rebounding teams too," Smith said. "Are we going to commit to grit and figure out a way to defend and rebound?”