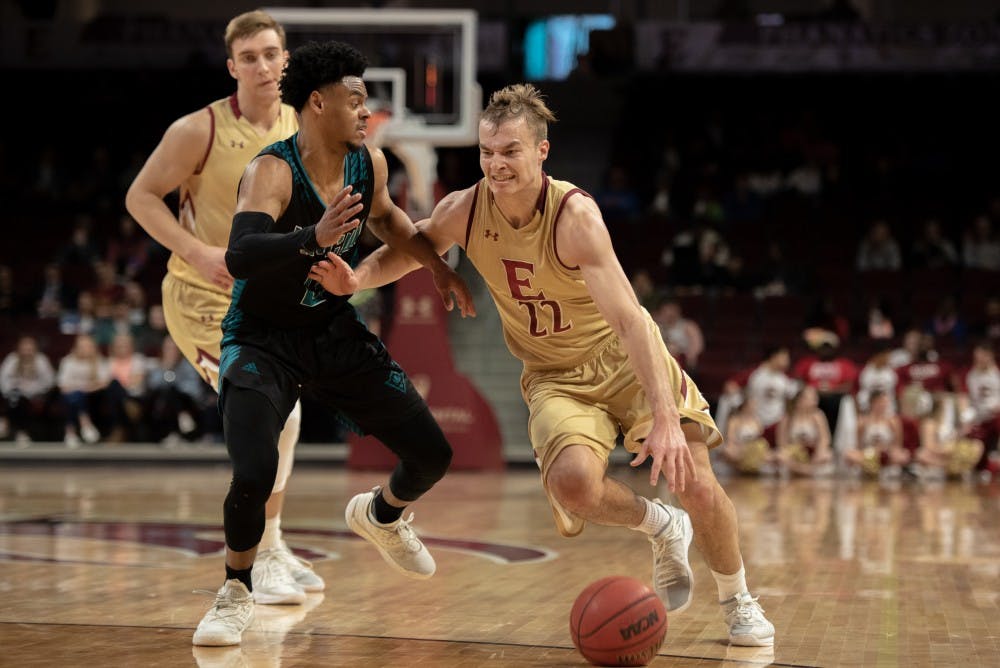 The Phoenix was paced by senior guard Steven Santa Ana’s season-high 31 points. Senior forward Tyler Seibring had a quiet 13 points and 11 rebounds for a team-leading fifth double-double of the season.

Santa Ana added 17 of his 31 points in the second half. He came out and hit back-to-back shots, with fouls getting called on each of them to score eight points in just two shots to open the half.

“Before the game, I had been going through a tough stretch a little bit, but I was just trying to be relaxed, and it’s coming down to an end, so I’m trying to enjoy every second of it,” Santa Ana said.

But the most important points of the game came down the stretch when Santa Ana made four straight free throws to ice the game.

“I’ve been at the line thousands and thousands of times at practice. At the end of the day, it’s routine at this point, and it’s just trying not to think about it,” Santa Ana said. “It’s the same as at the end of the game as it is at the beginning.”

Elon was successful in offensively shutting down Seahawk forward Devontae Cacok, holding him to 10 points on 4-11 shooting. This was in stark comparison to last time the teams met in Wilmington, when Cacok had twice as many points on less shots. Where the Phoenix didn’t do as well containing Cacock was on the boards.

“We wanted to get Cacok the ball a couple more times,” said UNCW head coach C.B. McGrath. “I think they did a good job of double-teaming him … but he did a heck of a job rebounding the ball. Normally when we get him the ball that many times, he does a good job of producing, but that just didn’t happen tonight.”

Elon head coach Matt Matheny seemed to be happy with how the team dealt with Cacok as well.

“I thought we crowded him pretty well. We wanted to make him play in a crowd, and I thought we did a good job of that,” Matheny said. “I thought he got some big, strong, physical buckets, which he’s capable of, but 18 rebounds? Come on.”

Cacok's 18 rebounds added to his NCAA-leading rebound total, which now stands at 356, averaging 12.0 rebounds a contest.

Elon came out scorching hot, taking its biggest lead of the game at 23-9 just seven minutes into the game. UNCW used some solid defense and the help of three straight turnovers by the Phoenix to whittle away at its lead, and Elon went into the break leading by five.

“We gave them too many rhythm-threes early and let them get off to a hot start. Similar to the game at our place,” McGrath said.

UNCW took its first lead of the night with 16:32 left to play in the game on a three from sophomore guard Ty Gadsden, to take a two point lead at 50-48. The two sides see-sawed for a time after that, with neither team taking more than a three-point advantage.

With the game tied at 62, UNCW fell silent, only making two baskets over the next nine minutes of the game. By the time the Seahawks broke out of their funk, Elon had an eight-point lead and was looking to close out the game.

Saturday, Feb. 23, will be the last time Elon will play at home this season. The seniors on the team will be honored in a pre-game ceremony to recognize their commitment to the team over the past four seasons. Following that, the team will take on the College of Charleston (21-8, 10-6).