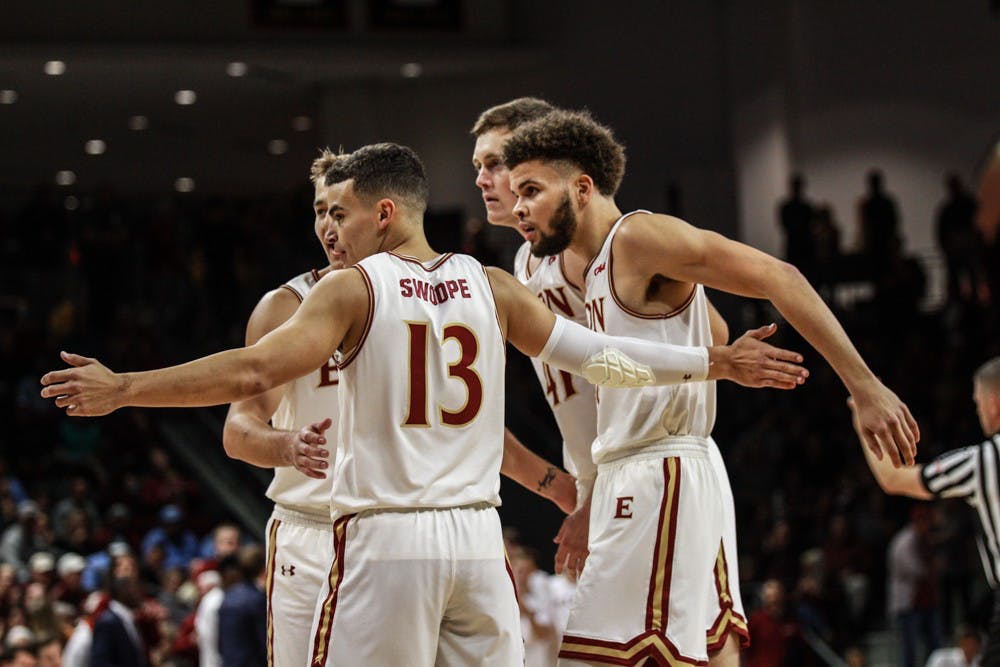 In front of a crowd of 3,623 fans, four senior men’s basketball players walked out to center court of Schar Center with loved ones in tow to be honored for their commitment to the program. Greeted with flowers, plaques and an embrace from head coach Matt Matheny, forward Tyler Seibring, guard Steven Santa Ana, forward Karolis Kundrotas and guard Sheldon Eberhardt got set for their last home game of their Elon University careers.

Matheny noted the crowd’s size — the second largest in Schar Center history — saying how happy he was to see so many people at the game to “celebrate a senior class that enjoyed the celebration of their last game.”

The four seniors have contributed nearly 4,000 points, 700 assists and 1,700 rebounds over the course of their careers. While those numbers have been the backbone of the Phoenix teams they have played on, things have not always come easy these past four years.

What about Dainan Swoope? Since the guard had his season cut short by a nagging right ankle injury after six games, he hasn't been able to be a force on the floor like Elon expected him to be this year. Swoope will be back next year to compete hopefully at full health for his fifth year of eligibility. This time next year, Swoope will get a full page commemorating his five years Under The Oaks. But for now, the focus is on the four still playing.

When this group came to Elon, the Phoenix was in its second year of Colonial Athletic Association (CAA) competition. Growing pains are unavoidable for a team moving conferences, and for Elon, this was no exception. But this core group has helped keep the team afloat during these tough years.

This tough mentality has earned the respect of many in the conference. Earl Grant, head coach of the College of Charleston, said he almost got emotional in the handshake line following the battle against Elon on Senior Night.

“It was a nice moment, and we appreciate what he has done,” Seibring said of Grant.

With 15 to 20 family members in attendance, Seibring capped off his last home game with 24 points and six rebounds. Though he took some time to reflect on his Schar Center finale, in true Tyler Seibring fashion, his mind was already on to the next game.

Despite Seibring’s efforts, the seniors could not be sent off on a high note, dropping their last home game 84-74. Matheny, always wanting to win, especially wanted to be able to send his seniors out the right way.

“It’s disappointing. They want to enjoy it, and we want them to enjoy it,” Matheny said. “You think back to a year ago: it was a disappointing senior night then too, but this one is different because our team just hasn’t put it all together yet.”

No one may have been more disappointed than Santa Ana, who — after a season-high 31 points against UNCW the game before— could only play eight minutes after coming down with the flu.

If Seibring has been the backbone of this group, Santa Ana has been the heart. The fiery North Carolina native has never been afraid to play physically and to try and get under the skin of opposing players. Santa Ana flies up and down the court, snatching rebounds, hitting threes and getting in the face of the other team.

Santa Ana put Elon into the national spotlight for 48 hours during his sophomore year after he infamously got tangled up with Grayson Allen, then-star guard of Duke University.

So maybe the flu may not have been the worst thing after all. Santa Ana got to go out with one of his best games to date for the Phoenix — and a win. If men’s basketball Sports Information Director Josh Gresh happens to drop those eight minutes of play against the Cougars from the game ledger and Santa Ana gets to call the win Thursday night over UNCW his last home game, we won’t tell anybody.

Eberhardt has been an interesting case in his senior year. Eberhardt seemed like the natural successor to Dmitri Thompson after he graduated. That seemed like it was going to be the case early in the year as Eberhardt started the first 12 games of the year, including every non-conference game and the conference opener against Towson University in late December.

But since then, Eberhardt has gotten only one other start — on Senior Night. It doesn’t seem Eberhardt’s production has been impacted as his points per game average has not changed since coming off the bench.

Kundrotas has had one of the most unfortunate ends to his Phoenix career. After playing in over 30 games his sophomore and junior years, he has played in just 18 this year. Averaging just eight minutes a game, both his points and rebounds have dropped to less than three per game.

Life is unfair sometimes, and the 6-foot-11-inch forward found that out the hard way. A few more rolls or bounces his way, and possibly he doesn’t get benched.

Matheny decided to go with freshman forward Chuck Hannah for the rest of the year, trying to grow youth in hopes of creating someone that can fill in at the forward position.

Matheny said he is proud of all the trials and tribulations the team has gone through and overcome. One thing he wanted to focus on this year was how the team worked.

“We needed to elevate [our work ethic]. Not that it was bad, but we wanted to do better. We wanted to really solidify our chemistry from player-to-player and player-to-coach, and now we want to finish strong,” Matheny said.

The Phoenix will have two games left to get in the right mindset before trying to make a run to the Tournament. If the team wants to advance out of the first round of the CAA Tournament for the first time since the 2014-2015 season, they may have to count on all four seniors to advance.