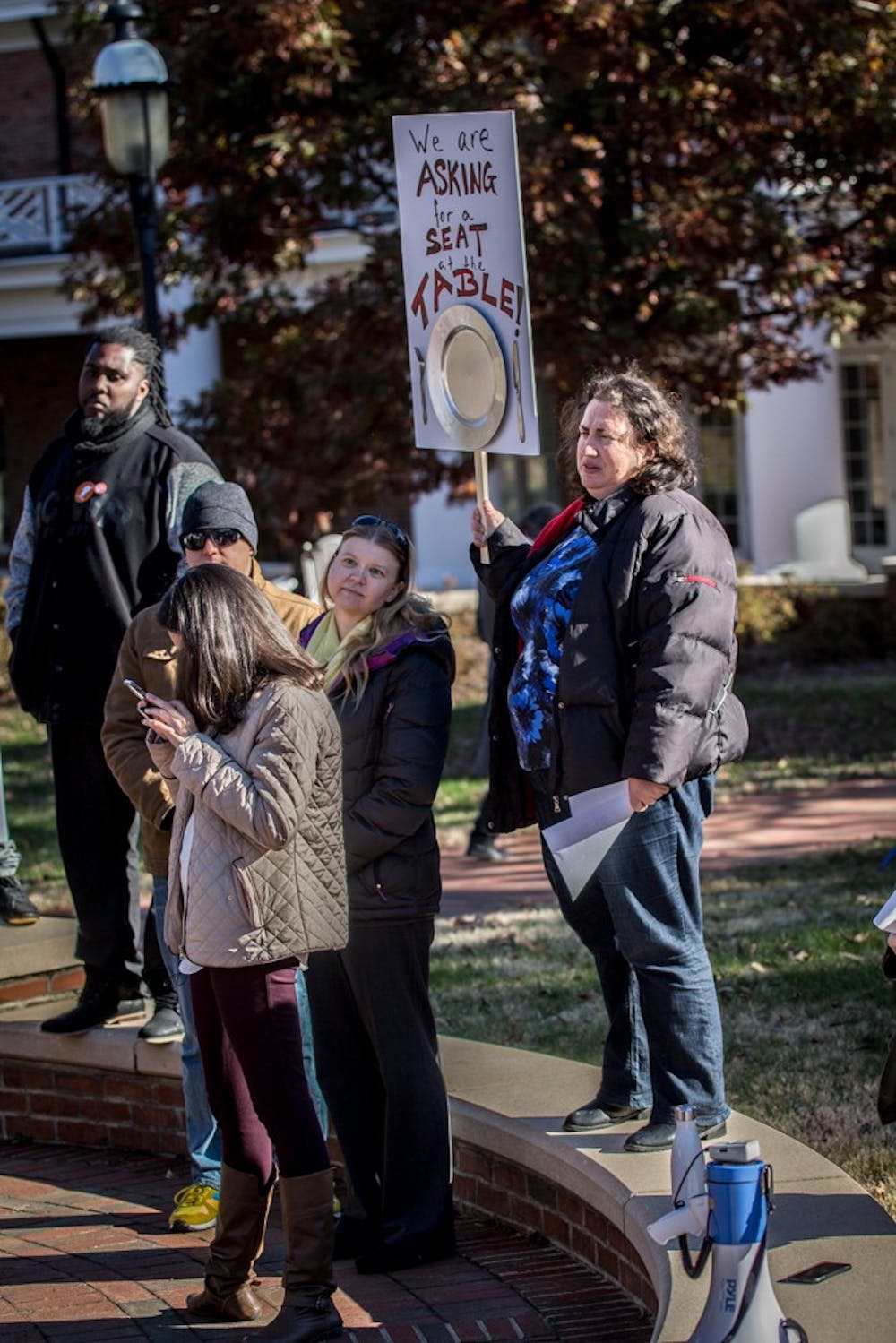 Sharon Eisner has formed many close relationships within the Elon University community since joining staff as an adjunct professor in 2007. For 12 years, Eisner has been an active member of the Elon community, spending extra time advising students and loving her job in the School of Communications. In October 2018, she publicly decided to join the push for a union of non-tenure-track faculty and currently sits on the Organizing Committee of Elon Faculty Forward. Her experiences as an adjunct faculty member — and as a woman — have shaped the path that led her to make that decision.

Throughout her time at Elon, Eisner said she has felt slighted in various aspects of her position, including being approached by the administration and asked to take on a lesser course load. The decision resulted in some of her courses being left untaught, and she looked around and wondered why this happened.

"SEIU is a organization that helps non-tenure- track faculty members at Elon unionize."

Catherine Bush, assistant professor of biology, also sits on the Organizing Committee of Elon Faculty Forward. She said it was not until conversations about forming a union for non-tenure-track faculty began in early 2018 that she became aware of a wage gap between her and her male counterparts.

This data is made available to the public by the Integrated Postsecondary Education Data System, which compiles data in categories from enrollment to finances and retention rates. The IPEDS data revealed in its 2017-2018 provisional release data report on Elon University that on average women in an assistant professor position were making nearly 5 percent less than male colleagues.

“People saw this,” Bush said. “Elon people who were compiling data. People knew about this, eyes saw it and nobody thought that was wrong. Nobody stood up.”

Bush said this is just one of the reasons she has been so vocal about the push to unionize, and she believes the security of a union would encourage more faculty members to speak up about their experiences. The pay gap, Bush explains, exists throughout varying levels of employment ranking. At Elon, according to IPEDS data, women on average are making about 6 percent less than male colleagues. At the instructor level though, women make an average of $60,375 per year, whereas men at the same level are only making $44,964.

"Faculty Forward is a project of SEIU that focuses on forming unions on campuses around the United States."

Provost Steven House explained in a statement that comparing average pay based on gender fails to take into account other factors, including years of teaching experience and rank.The “Academic Council Dashboard Report” is sent out annually to examine such factors.

“Again this year, that analysis found that gender is not a statistically significant factor in salary differences,” House said. “This annual analysis has determined repeatedly that longevity at Elon is the main differentiating factor, and Elon has found that on average, male faculty members have taught here longer than female faculty members.”

As an adjunct professor, the salary discrepancies hit Bush harder. She already lacks some of the benefits her tenure-track colleagues have available to them — including professional development funds and consistent healthcare or retirement plans. According to the Elon Fact Book, there are 124 non-tenure-track full-time faculty members at Elon.

Eisner doesn’t believe she had been lied to as much as tangled up in confusion resulting from a lack of transparency between academic departments.  She feels the union will facilitate the discussions necessary to achieve that transparency.

Bush hopes that moving forward Elon will become more transparent with salary information. At a public university, Bush said, data regarding salaries is made public. Some of Elon's salary data is made available through the American Association of University Professors. But as a private university, Elon does not have the same requirements as a public university.

While Eisner and other union supporters have made their struggles with the university known, some faculty do not believe a union is the right choice.

One of Eisner’s colleagues, Mark Fox, adjunct instructor in communications, said he has “no complaints” about his salary and benefits. He said that while he understands the urge to lobby for more opportunities, “Elon makes it clear on adjunct faculty contracts that it is a limited-term hire with no expectation for full-time employment.”

Bush is not only worried about inequality among colleagues today, but as a professor in the STEM field, she also looks at her students and worries about what they may face in the future workplace.

“I teach cell-bio lectures, two big cell-bio lectures — 76 percent of my students are female. In one of my labs, it’s 92 percent. This is what we wanted. We wanted females in STEM, this is what we’ve worked so hard to do. And we’ve got them, this is amazing," Bush said. "When I look at them, I think, 'Well, of course they are going to go into their careers and get paid equally — of course it’s 2019, they’re going to come out in a couple years and get paid equally.' That’s naive of me to think. Because the very school that is preparing them for their careers doesn’t pay their professors equally.”

While Faculty Forward focuses on the needs of non-tenure-track faculty at Elon, the hope is that it will “trickle upward” and affect staff on all areas of campus.

“Then we are doing our little part to make a more just environment. We do it here at Elon, and we push this into the history books,” Bush said. “It's way past time to do this.”

Ballots were sent out to visiting faculty, instructors, part-time or full-time adjunct professors and limited-term faculty on Feb. 19 to determine whether or not the Service Employees International Union will be officially recognized on Elon’s campus. The ballots are sent out by the National Labor Relations Board who will count them on March 12. Votes will be completely confidential.

Though President Connie Book and other administrators have come out opposing the establishment of a union, Bush remains hopeful.

“We are absolutely hoping and preparing for success,” Bush said.