Seibring’s 24 points not enough to top the College of Charleston on Senior Night. 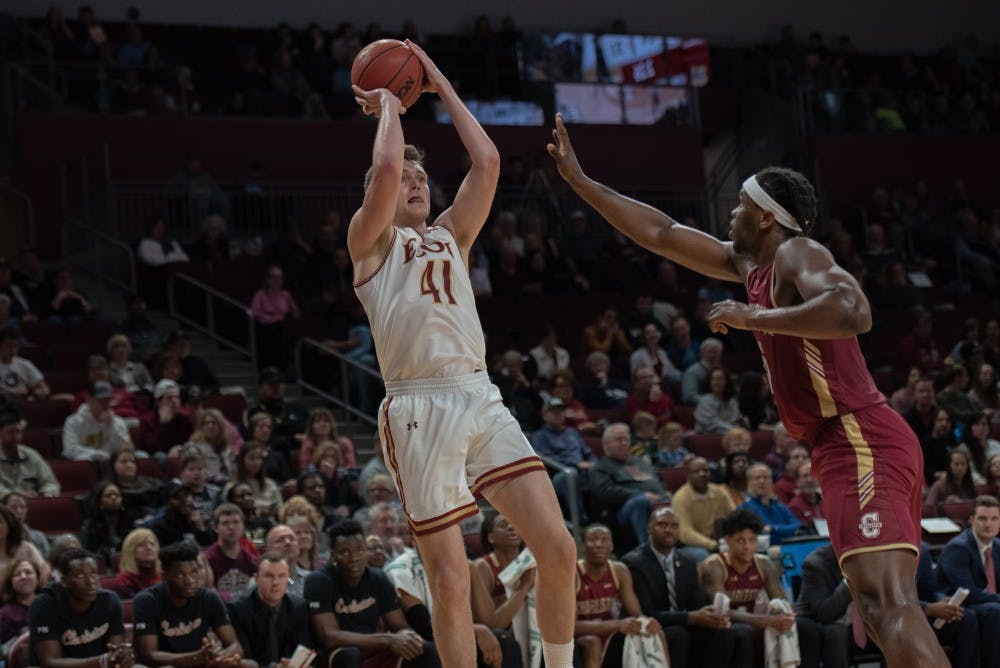 Elon University men's basketball fell to the College of Charleston Cougars 84-74 on Senior Night Saturday, Feb. 23, in the final home game of the team's inaugural season at Schar Center.

The Cougars took charge in the first half, sinking more than 50 percent of their shots, while the Phoenix struggled beyond the arc, making only five three-pointers in 20 attempts.

Senior forward Tyler Seibring and freshman guard Kris Wooten led the Phoenix offense in the first half. Both starters combined for 20 of Elon’s 31 points going into the break.

Senior guard Steven Santa Ana played only eight minutes and scored zero points, and he did not play at all in the second half, which was unusual for him. After the game, head coach Matt Matheny described Santa Ana as feeling “under the weather.”

College of Charleston came out firing after halftime, outscoring Elon 11-0 in the first three minutes. Charleston senior forward Jarrell Brantley led the offense and finished with a team-high 24 points. Junior guard Grant Riller also contributed 18 points on the night. Seibring matched Brantley's 24 points, but his efforts failed to lift the Phoenix to victory.

Though the Phoenix went down by 20 early in the second half, the team did not go down without a fight, and Elon shortened the deficit to single digits late in the game. Elon also picked up the pace and sank eight more three-pointers as a team. Freshman guard Andy Pack says the missed opportunities came in the form of defensive stops.

Elon finished its first season at Schar Center with five wins and 11 losses at home. Elon also finishes the season series against the College of Charleston with a record of 0-2.

As it was Senior Night at Schar Center, Elon seniors Karolis Kundrotas, Sheldon Eberhardt, Santa Ana and Seibring were honored prior to tip-off. Eberhardt and Seibring were met with applause when exiting the game with 11 seconds left.

All four seniors on Elon’s roster were in the starting lineup, and Matheny spoke about the impact these players had on the basketball program after the game.

“They have been through some great battles and some tough losses and some great wins, and they got to do it in two different venues,” Matheny said.

Matheny said he set goals for the seniors coming into this season.

“We really challenged our senior class this year to improve our work ethic because we needed to elevate it. Not that it was bad, but we needed to be better,” Matheny said. “We really wanted to solidify our chemistry. Player to player, player to coach. Now we want to finish strong.”