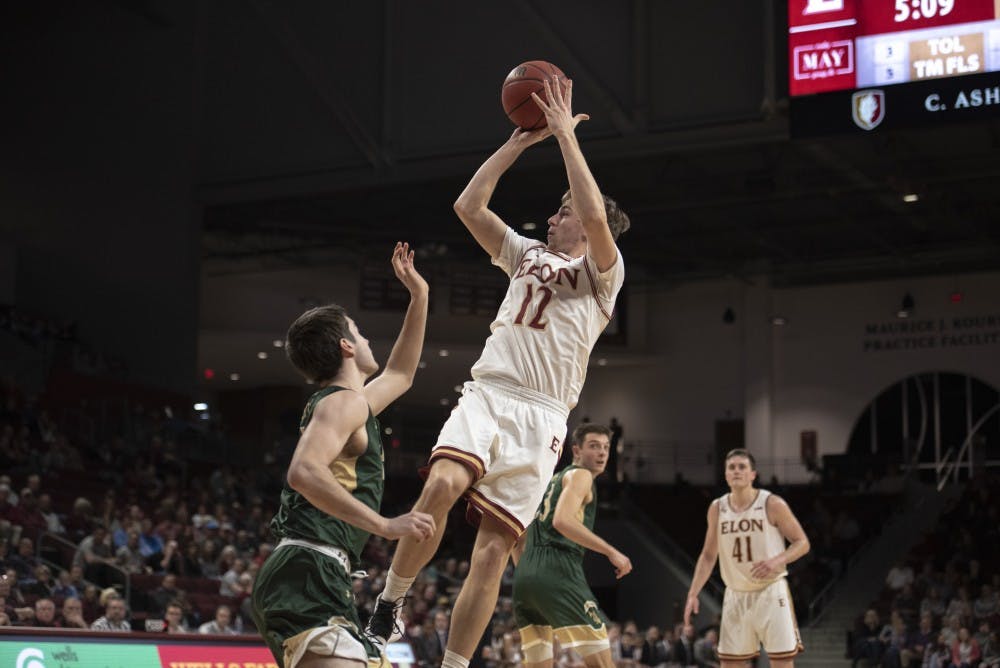 Elon University men’s basketball fell short against the College of William and Mary 84-74 at Schar Center on Saturday, Feb. 16. The Phoenix went cold shooting down the stretch as the team lost its fourth straight game while attempting to tune up for the Colonial Athletic Association (CAA) Tournament in March.

Elon led at halftime 38-34 but could not find a way to score down the stretch. Getting stopped on 12 of its last 15 possessions, Elon could not hang with the Tribe, who was able to close out the game. William and Mary head coach Tony Shaver attributed his team’s lockdown defense in the closing minutes to getting in the face of shooters and not giving them space to make a play. This showed as Elon had a measly six points in the last seven and a half minutes of the game.

“We can’t do it for 35 [minutes],” said sophomore guard Nathan Priddy of his team’s offense. “We’ve got to do it for 40 straight minutes.”

The Phoenix (8-19, 4-10 in CAA) was unable to stop junior forward Nathan Knight of the Tribe (10-16, 6-8 in CAA) all game. Knight started the game with a rim-rocking dunk to open the scoring and would finish with 35 points. Knight’s 6-foot-10-inch frame was imposing its will in the paint the entire game, not allowing much Elon success in defending.

“He’s a big guy. We just have to try and make his life hard from the beginning,” said senior forward Tyler Seibring of Knight’s play.

Redshirt-junior guard Matt Milon made life difficult for Elon as well, pouring in 19 points. Milon caught fire in the second half with 16 of those 19 points coming after halftime. Shaver called Milon “really special” in the second half, saying he wished he had seen this the entire year.

“That’s a sign of our team getting better,” Matheny said. “We’re putting ourselves in a position to win some down the stretch. I thought we had great energy. … That first half is how we want to play.”

Following a dismal 1-17 shooting performance last time out, Seibring looked as though he was headed down the wrong path once again in the first half. Until the last minute of play in the half, Seibring was held without a field goal. Seibring was able to hit a shot from just outside of the paint to find the bottom of the net for the first time in 21 tries.

Despite this, Seibring was able to put together a nice second half and get back on track. He opened the second half scoring for Elon and also contributed back-to-back three pointers en route to a 17-point comeback performance.

“It’s a new week. You’ve got to get ready to go. I think the way we ran our offense and trusted it, just the way we kept moving the ball, … that was the key, just trying to play ball,” Seibring said.

Elon is looking to turn the corner with the last two home games of the year coming up next weekend. The Phoenix will try to find a way to win going into the tournament in Charleston, South Carolina. For Priddy, the biggest thing is trying to send the seniors out the right way.

“We go into every game trying and expecting to win, and that’s really the only goal for the next four games: to take them one at a time and to win them, one by one,” Priddy said.

Elon will be back in action on Thursday, Feb. 21, against the University of North Carolina Wilmington Seahawks, who Elon beat in Wilmington earlier this year.