Phoenix falls after a big comeback in the second half 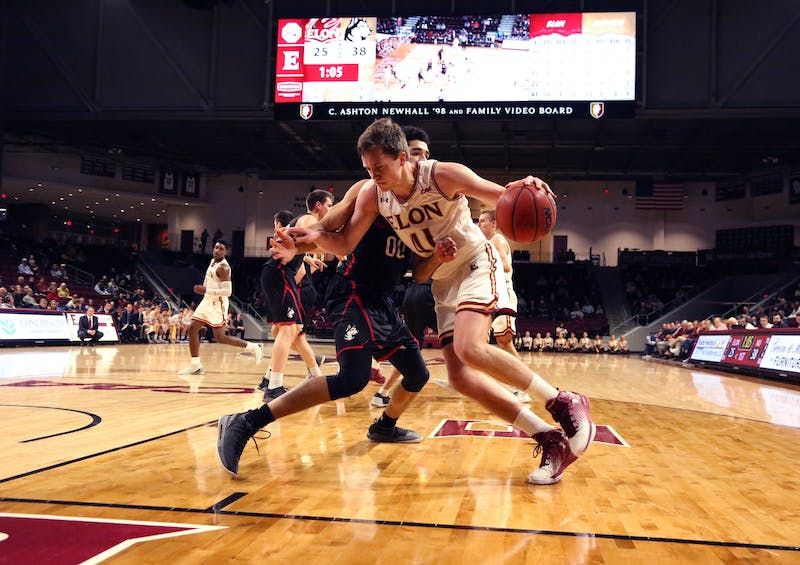 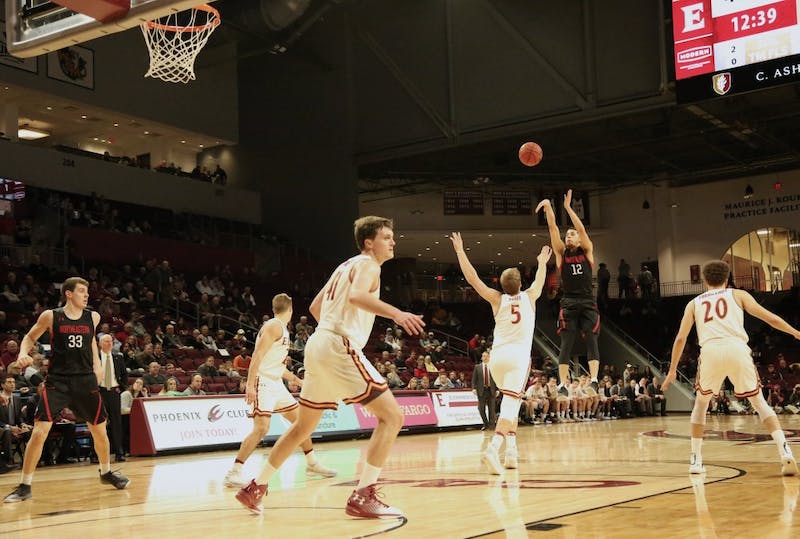 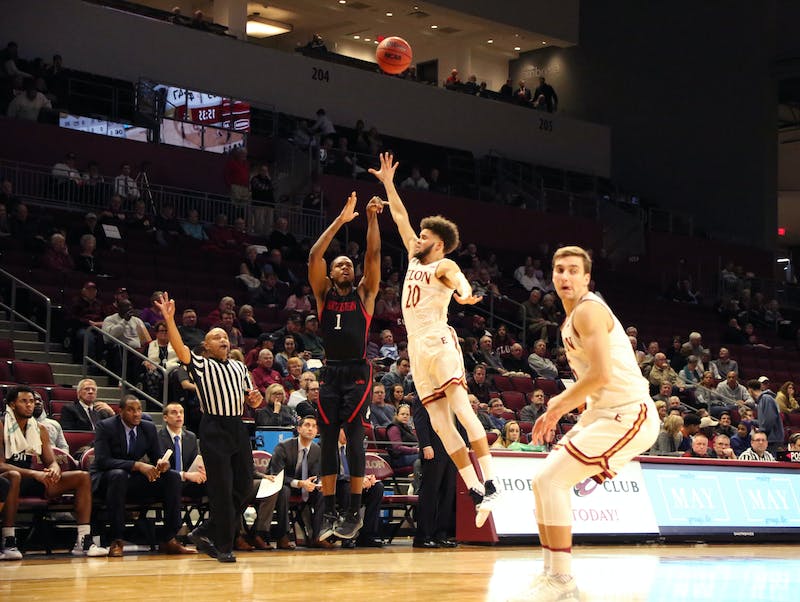 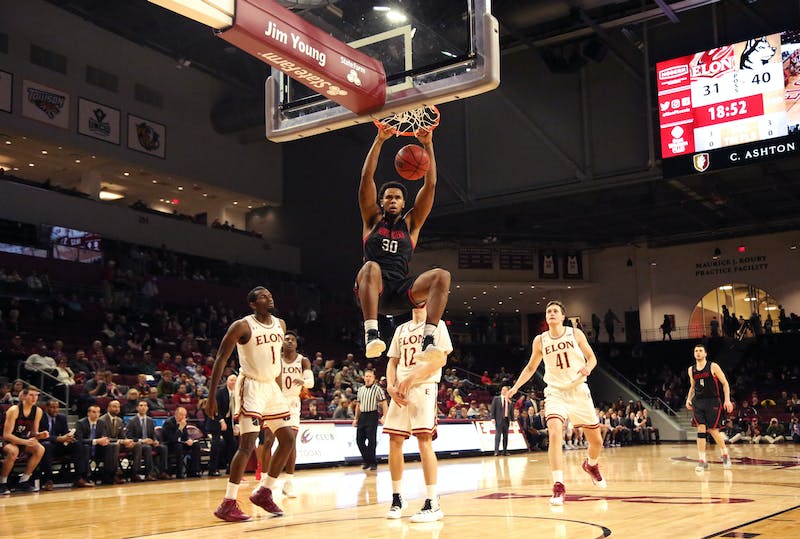 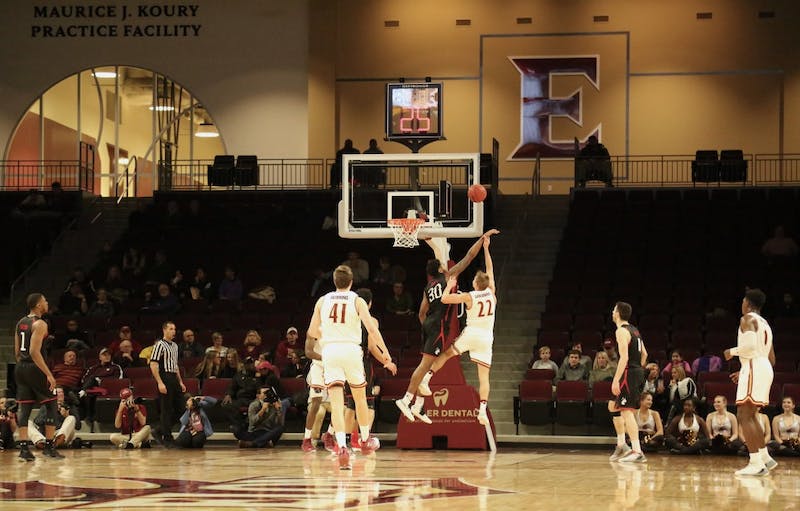 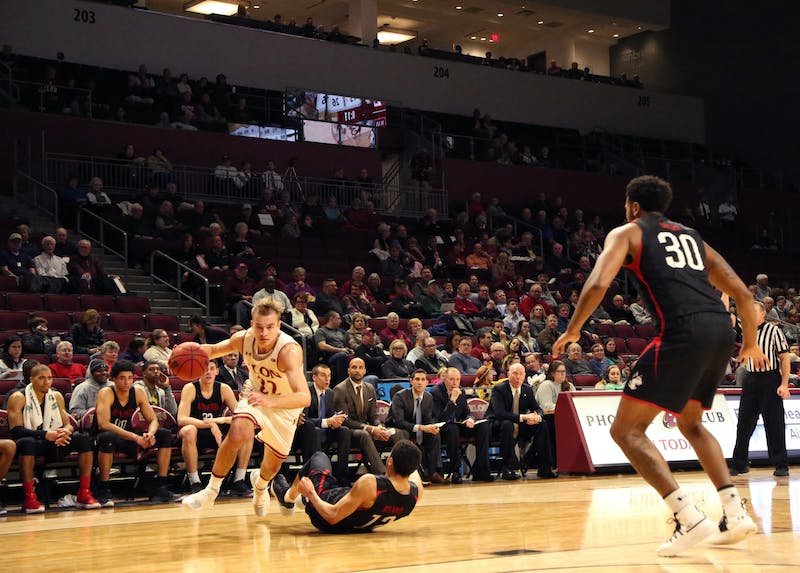 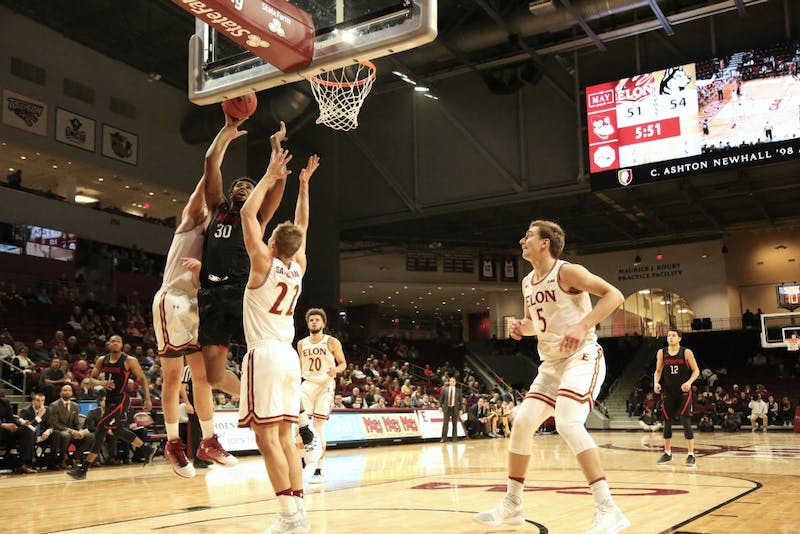 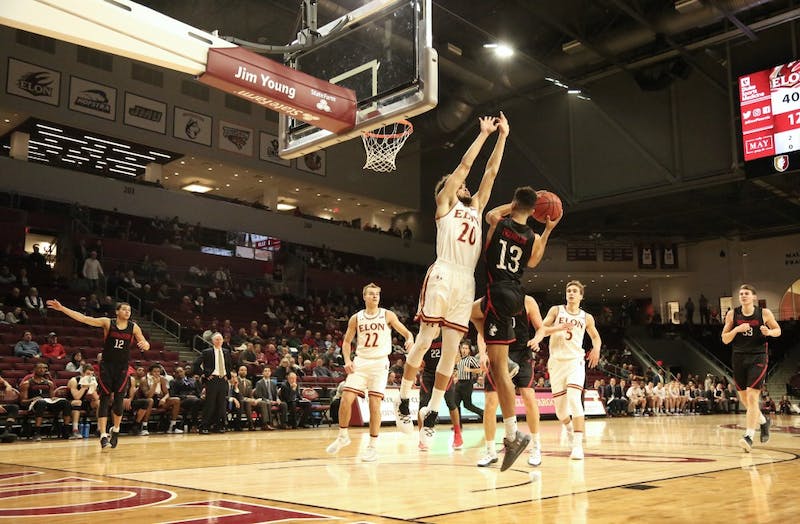 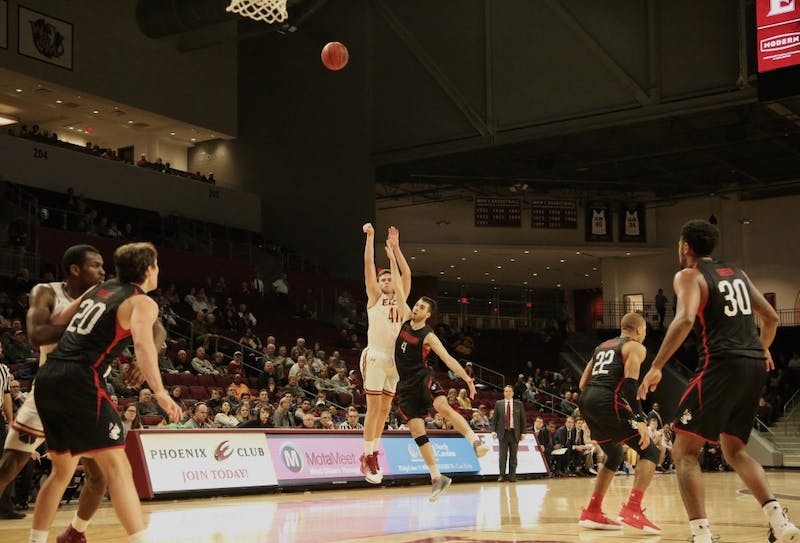 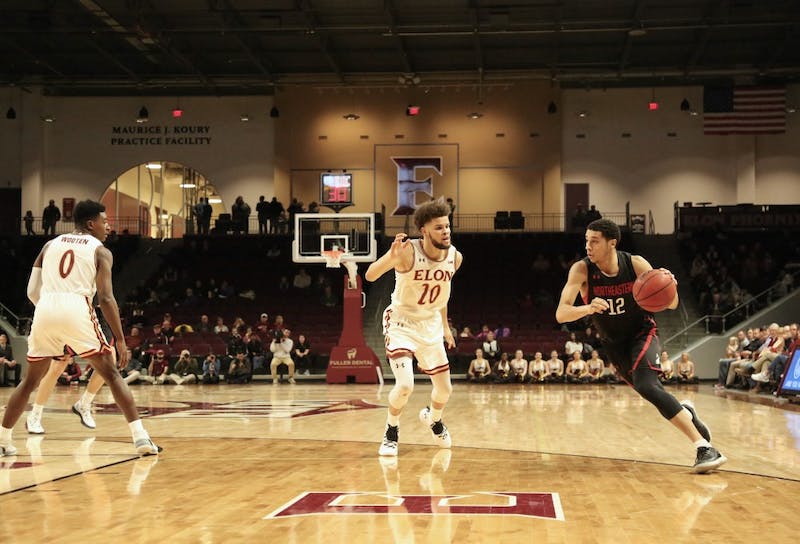 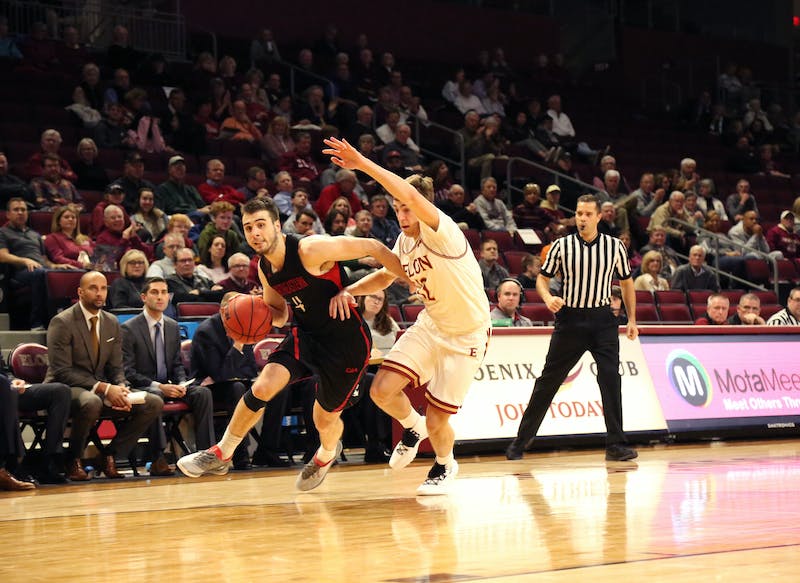 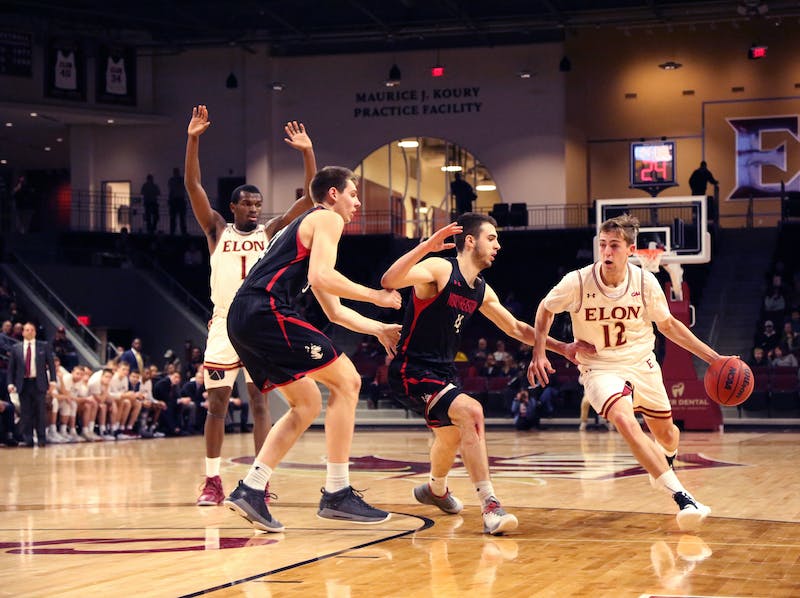 The Elon Phoenix and Northeastern Huskies faced-off on Thursday, Jan. 10 for a close game that ended with a Huskies 81-70 victory.

After a furious second half comeback, Elon University men’s basketball (5-13, 1-4) fell to the Northeastern University Huskies in overtime 81-70 at Schar Center. Elon was able to overcome a multiple double-digit deficit to force the extra frame, where the team’s ball-handling would become costly.

Elon took its first lead of the game with just under three minutes remaining when senior guard Sheldon Eberhardt got a layup to fall and give Elon the 60-59 advantage. Senior forward Tyler Seibring went to the foul line and was able to hit both free throws with 1:09 remaining in the game to give Elon a two-point lead.

“Obviously we wanted to go home with the win, but I think that composure we showed in the first half and coming back in the second was big for us as a young team,” Seibring said.

Eberhardt was able to force the Huskies hand and get a turnover on the defensive end, but with his back to the basket, sophomore guard Nathan Priddy was pickpocketed by Northeastern’s Donnell Gresham who was able to flush the easy layup and tie the game once again.

“I was just kind of careless. I’ll learn from it, and it won’t happen again. Better happen now than in March,” Priddy said.

With 37 seconds left on the clock, Elon brought the ball up into the front court for what would be the team’s final possession. Seibring was unable to get his shot to go, and Northeastern had a chance to win it.

“I thought we got a look, I just really wish it would’ve gone down,” said head coach Matt Matheny.

In overtime, the same man who had tied the game for the Huskies had a chance to play hero. As the clock wound down, Gresham put up a shot and watched along with everyone else in Schar Center as it nearly fell before spinning out of the hoop as the horn sounded.

“We see a lot of funky rolls around here, and we’re starting to get used to them,” Seibring said. “Around half way through I thought, ‘I think this one is going to pop out.’”

Elon’s turnover woes that plagued them in the first half reared its ugly head at the beginning of the overtime period. Three turnovers led to five points to start the extra time for Northeastern. The Huskies used an 8-0 run to solidify their win and Elon would never get any closer than six points in the overtime period.

“It hurts,” Seibring said. “Any loss in basketball always stings right after. I think the key for us is going to be mentally strong, and learning from the mistakes we made. Understanding the steps we’ve taken from throughout the season, but positivity is what we are trying to do and staying confident.”

The men’s basketball team has dug itself into many holes over the course of the season, and tonight was no exception. It seems as though many times this season Elon has gotten “punched” as Matheny says and then put together a run in the late first half or early second half to make the game close before pedering out and not being able to get a win.

Elon was tasked with overcoming a 16 point deficit early in the second half. This was one of the few games this season where it was able to take a lead back in the game, most nights it is not as fortunate.

“One of the biggest take aways is that we have to stay positive and realize we can play with a lot of teams and all the teams in this league,” Seibring said.

Elon’s road to the Colonial Athletic Association (CAA) tournament gets no easier this weekend as they now welcome in Hofstra University (13-3, 3-0) to Schar Center on Saturday. The team will need to regroup and get back on track before they play three games on the road following Saturday night’s contest.

Finding itself in overtime for the first time this year, Elon University’s men’s basketball looked lost. Three straight turnovers to start the period quickly put Elon into an eight-point hole.

Things started to get choppy when, following a foul, senior guard Steven Santa Ana and Northeastern University’s Vasa Pusica accrued double technical fouls. Pusica was sent to the line because he was fouled by  Eberhardt. Pusica picked up a second technical in between his free throws and was ushered off the floor to the taunts of some Elon fans sitting courtside.

A march to the free throw line ensued, as Northeastern widened its lead and Elon dropped a hotly contested game 81-70 in overtime.

Second Half: Elon storms back

Using multiple runs of seven or more straight points, Elon found a way to scratch and claw its way back into a tight game. Despite finding itself down 16 at one point in the half, Elon was able to regain the lead off of an Eberhardt layup with just under three minutes left in the game.

Back and forth the teams went, neither giving an inch the entire way home. With the game tied in the final seconds, Seibring  was unable to convert a layup, and the Huskies’ Gresham found the game on his fingertips. A left-handed runner rimmed out as time expired and the game headed to overtime, knotted at 63.

Santa Ana, Seibring and Priddy led the scoring for the Phoenix with 20, 17 and 10 points respectively.

The Phoenix found itself down heading into halftime 40-28 to the Northeastern University Huskies. Before it knew it, the Phoenix was down 11 points half way through the first period. Turnovers proved costly for the squad as three straight turnovers led to seven points for Northeastern. Elon ended the first half with seven turnovers.

One bright spot in the first 20 minutes was Seibring. The Illinois native poured in 10 early points to keep the Phoenix hanging in with the team picked to win the Colonial Athletic Association in the preseason.

Just as quickly as an 8-0 run developed for the Phoenix to drop the Northeastern lead to six points, the Huskies used a 9-3 run to end the half and widen the lead to 12 points with another 20 minutes left to play.

The scoring distribution was even across the board for Northeastern, seeing all eight players that got time finding the bottom of the bucket.