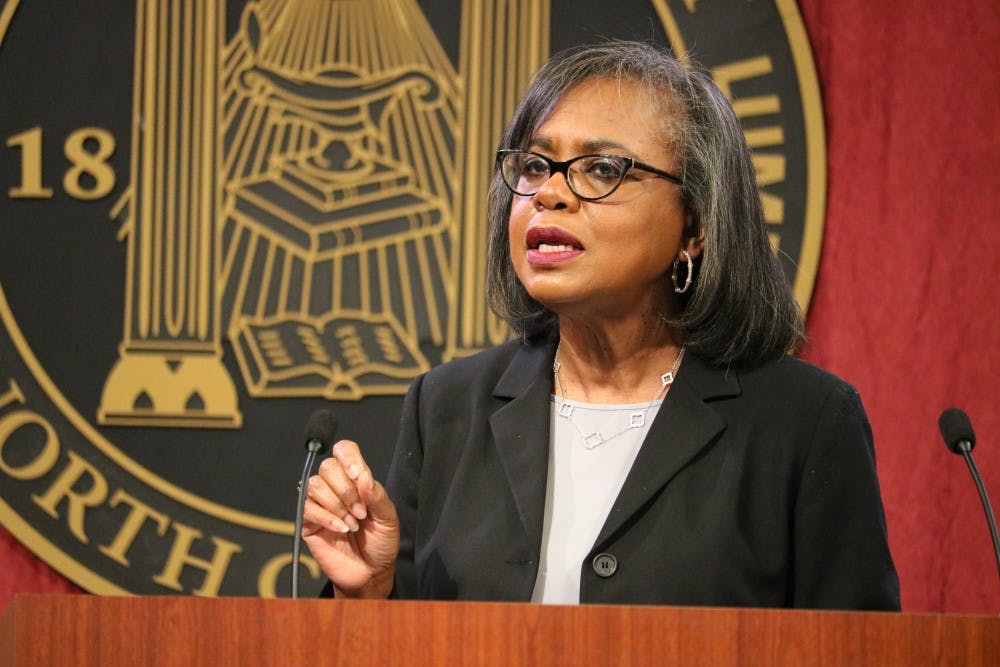 After being introduced by President Connie Book and Ann Cahill, professor of philosophy,  Hill took the stage to discuss the correlation of modern social movements in relation to those of the 1960s.

Her speech, titled “From Social Movement to Social Impact: Putting An End to Sexual Harassment in the Workplace,” touched on more than just her own experience of testifying before the Supreme Court against Associate Justice Clarence Thomas for sexual misconduct.

Hill, a self-proclaimed “Brown v. Board of Education baby,” believes that the Civil Rights Movement had a profound impact on society. But Hill said that while many Americans have learned from past mistakes, some institutions remain unchanged.

Hill believes one of these institutions may be the United States government, and she justified her claims with last fall’s events.

Hill’s speech comes four months after the controversial confirmation of Supreme Court Associate Justice Brett Kavanaugh. Christine Blasey Ford alleged Kavanaugh sexually assaulted her when they were in high school, and both she and Kavanaugh testified before the Senate Judiciary Committee, with Kavanaugh eventually winning the nomination. The episode greatly resembled Hill’s testimony, and it provided key lessons for the nation, she said.

“Maybe the leaders of the Senate Judiciary Committee have not learned a lot, but we have,” Hill said. “Yes things have changed, but has enough changed? No.”

“There were signs that we as a society are waking up. People started telling their stories. However, I had no idea that months after MeToo hit the press, I had no idea we would be jolted back to the past that we as a nation thought we had moved beyond.”

According to Hill, the government may be repeating past mistakes, partially due to the oversight or purposeful neglect.Two of those examples come from the removal of sexual violence and misconduct and LGBTQ information from the White House website after the inauguration of President Donald Trump.

“We need to know that our leaders care about the conditions that data reflect,” a Hill said. “But this erasure continues today, denying our experiences and erasing them.”

Hill said that until people in power view sexual assault and diversity as a matter of public significance, things will never change at the rate they need to. She said societal movements are successful when there is a sense of unity, pointing to tactics used by Martin Luther King Jr. and the Civil Rights Movement. College students famously demonstrating against racial inequality in 2015, along with the rise of the #MeToo movement, showed Hill that the younger generation is ready to lead. But in order to do so, they must understand those that came before them, she said.

“If we don't learn our history, we are missing an opportunity to bring together a community of women that can push us forward to the next level so that we can understand Dr. King’s strategy of being  a social movement to a level of social impact,” Hill said.

“What we have to do is commit to something that is very simple, that women and girls are entitled to work, to be educated and live without the threat of sexual violence.”

Maya Angelou Presidential Chair at Wake Forest University, Melissa Harris-Perry, was also in attendance. Two years ago, she delivered the speech for the same lecture series. Today, she reflected on the intellect, grace and humor of Hill.

“I would say that her call to action is both ambitious and realistic,” Harris-Perry said.

Harris-Perry said that there is no single solution to these issues, but there are things we can do right now to move toward positive change.

“Stay in conversation, ask questions and know that the struggle continues,” she said.