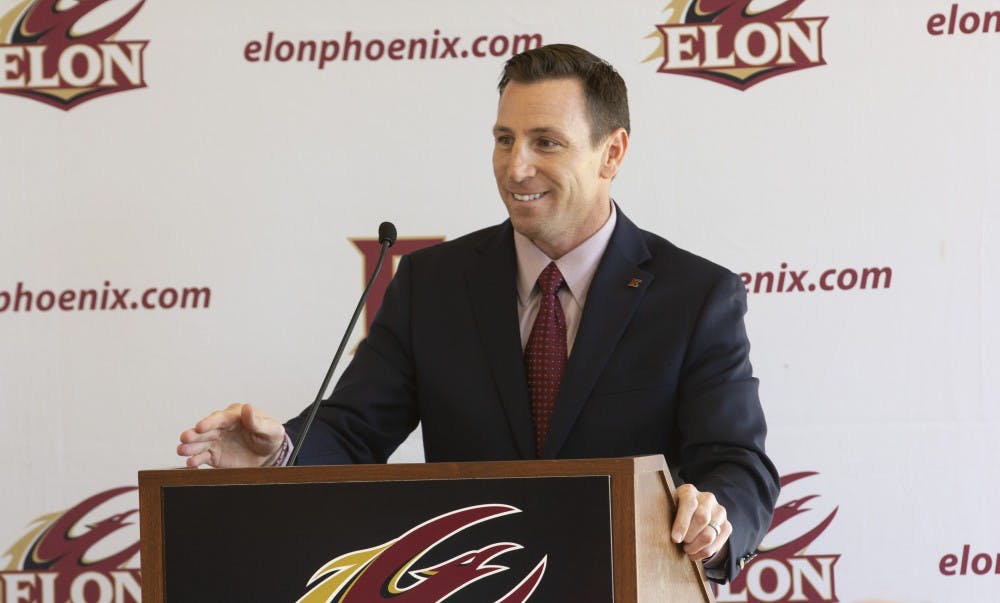 Photo by Anton L. Delgado | Elon News Network
During the press conference officially announcing his appointment as head coach, Tony Trisciani discusses his life-long love of football and the future he has in store for the Phoenix on Monday, Dec. 17.

Elon University football has named defensive coordinator Tony Trisciani as the new head coach. This announcement follows the resignation of Curt Cignetti on Friday afternoon. Trisciani joined the Phoenix under Cignetti in 2017.

"We are thrilled to have Tony Trisciani as our next head football coach at Elon," said Director of Athletics Dave Blank in a press release. "Coach Trisciani has played a pivotal role in the success of our football program over the past two seasons, and he knows firsthand what it takes to win at Elon."

Trisciani’s defense in the 2018 campaign held opponents to less than 24 points per game and ended the year with 20 takeaways. The defense was star-studded, with players like junior defensive back Greg Liggs Jr. taking an all-CAA second-team award and senior linebacker Matt Baker, senior defensive back Tyler Campbell and junior defensive lineman Marcus Willoughby all coming away with third-team honors.

Elon University football has named defensive coordinator Tony Trisciani as the new head coach. This announcement follows the resignation of Curt Cignetti on Friday afternoon. Trisciani joined the Phoenix under Cignetti in 2017.

"I am proud to be the head football coach at Elon University. I'd like to thank President Book, Dave Blank and the rest of the administration for the opportunity to lead our football program and student-athletes," Trisciani said in a press release.

Trisciani was even more excited in person at the press conference naming him head coach.

"I've played and coached in a lot of football games, but today is by far the greatest day in my football career," Trisciani said.

Trisciani will be serving as the 23rd head coach of the program and he made it a point to acknowledge that while performance on the field is important, he is looking to foster a community of success off the field as well.

"Together we are going to continue to hold our kids to the high standards and expectations of our program and provide a source of pride for the entire Elon community," Trisciani said.

Before coming to Elon, Trisciani made his mark in the CAA and the nation with the Villanova University Wildcats. In 2016, Trisciani’s squad lead the nation in total defense while also leading the CAA in rushing and scoring defense. Before Villanova, Trisciani spent time as the head coach at Whitehall High School in Pennsylvania, linebackers coach at Lehigh University and even a year with Elon in 2006 as the special teams coordinator.

Trisciani will succeed Cignetti, who spent two years with the Phoenix and guided them to a playoff berth in both seasons. Cignetti left Elon to take over as head coach for the James Madison University Dukes, Elon’s in-conference rival. Elon beat the Dukes for the first time in school history this past year 27-24 under Cignetti. The Phoenix will next go up against the Dukes on Sept. 28 at Elon.

Trisciani made sure to thank Cignetti during the press conference for all the former head coach had done while at Elon, saying, "We wouldn't be where we are now without him, and he wouldn't be at JMU without us."

Following the departure of Cignetti, an in-house hire may be exactly what the team needs. After the announcement on Friday, many players took to social media to react to the coach leaving. This emotional reaction from players may be quelled by having someone who has been around the program take over.

"At the end of the day, I believe this transition will bring our team closer," Trisciani said. "When our players return to campus on Jan. 2, we're going to focus on the day-to-day, it's a process."

As the new head coach, it is unclear whether Trisciani will continue defensive play-calling or if another coach will take over those duties.

"In the end, could I end up calling the defense? Possibly," Trisciani said. "If that's what I think is best for our program and our kids."