Phoenix falls to No. 25 Furman

Slow start for Phoenix has team down 10 after 20 minutes 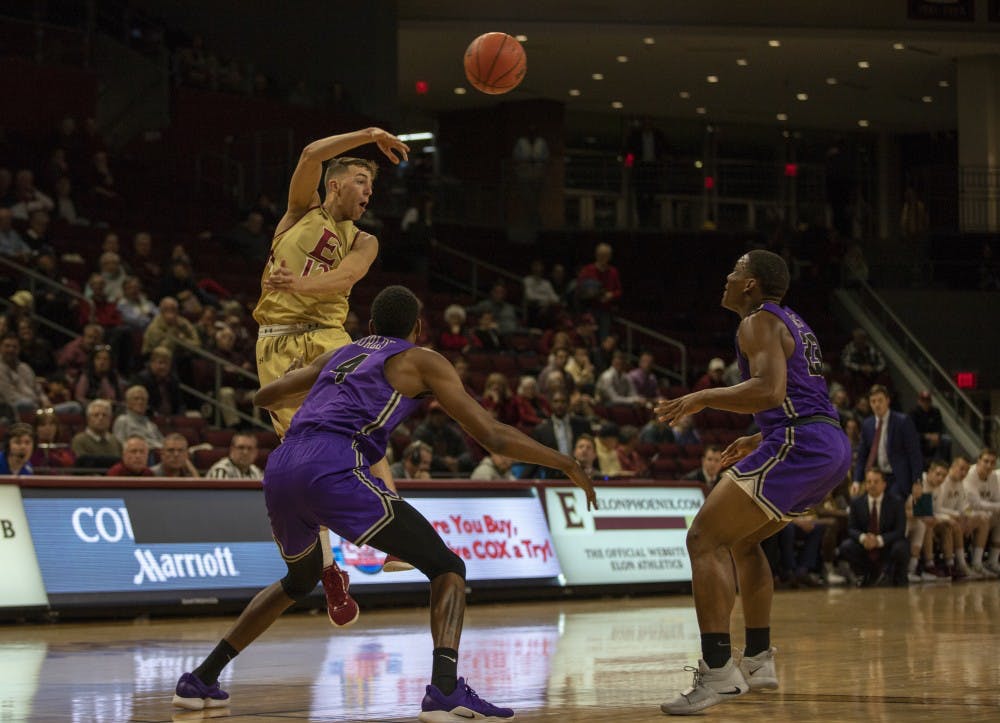 Elon University men’s basketball (3-6) lost to the No. 25 Furman University Paladins (9-0) 98-77  on Tuesday night. The Phoenix held its own for most of the game, but the speed of Furman took over late. Elon remains winless all-time against ranked opponents.

Elon came out shooting ice cold. The team hit just three of its first 15 shots, including going 1-8 to start off of the three-point shot. Furman was able to open up a huge lead, going up 14 points after 12 minutes of play. The Phoenix looked dead in the water before it found a way to come alive.

“What Furman did is what good teams do when you make a mistake … the made us pay,” said head coach Matt Matheny. “It seems like they hit every three they took in a four or five minute stretch to push the game open.”

Nearly halfway through the first half, Elon found the bottom of the basket more and more. After the dismal start from behind the arc, the Phoenix went five of five over a short span to get themselves back in the game. Slowly but surely Elon chipped away at the Paladin lead, making it just a seven-point game with over five minutes to play.

One major struggle for Elon last week against Boston University was rebounding. With just two offensive rebounds the entire contest, Elon corrected that in the first half and was nearly dead even with Furman on the glass at the break. Elon collected 19 boards, including six on the offensive side.

Senior guard Steven Santa Ana lead the way scoring for the Phoenix with 14 points. He shot 5-8 from the field, including 4-6 from beyond the arc. Senior forward Matt Rafferty and sophomore forward Clay Mounce lead the way for the Paladins, scoring eight and nine points respectively.

“We felt at halftime that we fought really hard, we played really hard, and our offense was pretty stagnant. We made some threes that kept it within reach… but offensively we didn’t have a great rhythm or flow,” said head coach Matt Matheny.

Elon came out fired up in the second half. Senior forward Tyler Seibring was noticeably quiet in the first half. He scored just two shots on 1-5 shooting. Seibring made a splash in the game early in the second half. Driving down and scoring on a fastbreak layup, stealing the inbounds pass on the ensuing play, scoring and then drawing the foul. (Yes, he hit the free throw too).

“It was just something that happened,” Seibring said of the impromptu play. “Early on the stagnation offensively lead to just the movement not being great. For me and everyone our team, we’ve got to move better there. And then just trying to get more momentum getting into that second half was the key for all of us. Just trying to cut into that lead they had developed.”

The Phoenix seemed to use that hustle play in effort to pull off its first win over a ranked opponent in program history. Crisp ball movement, flying back on defense after scores, Elon looked the quickest it has looked all year to try and work back into the game against the Paladins.

Santa Ana could not continue the nice offensive night he had in the second half, scoring seven points in the second frame on 2-4 shooting.

“I don’t view it as me slowing up. I think it was them putting a little bit more pressure on me. But you can see we’ve got guys up and down the line that can score for us. If you put a little bit of emphasis on one of us, you can’t do that on the entire team because someone will make you pay,” Santa Ana said.

But no matter how quick the Phoenix was, the team was unable to string together multiple shots or multiple defensive stops. As much as it seemed like Elon was in the game, the Phoenix never took the lead, as Furman won wire-to-wire.

“I’ve been around Furman basketball for 30 years,” said Matheny, the former assistant coach at Davidson who is a SoCon rival of Furman, “this is the best Furman team I’ve ever seen.”

Furman pulled away for the Phoenix down the stretch. Elon’s scoring ability evaporated and the Paladins closed the door on the Phoenix using an 18-3 run midway through the second half to put Elon at arm’s length.

Elon doesn’t get a break, as it will face another tough SoCon team in University of North Carolina at Greensboro at Schar Center on Friday at 7 p.m. The Spartans are currently 7-2 and their only loses have come on the road against ranked teams.