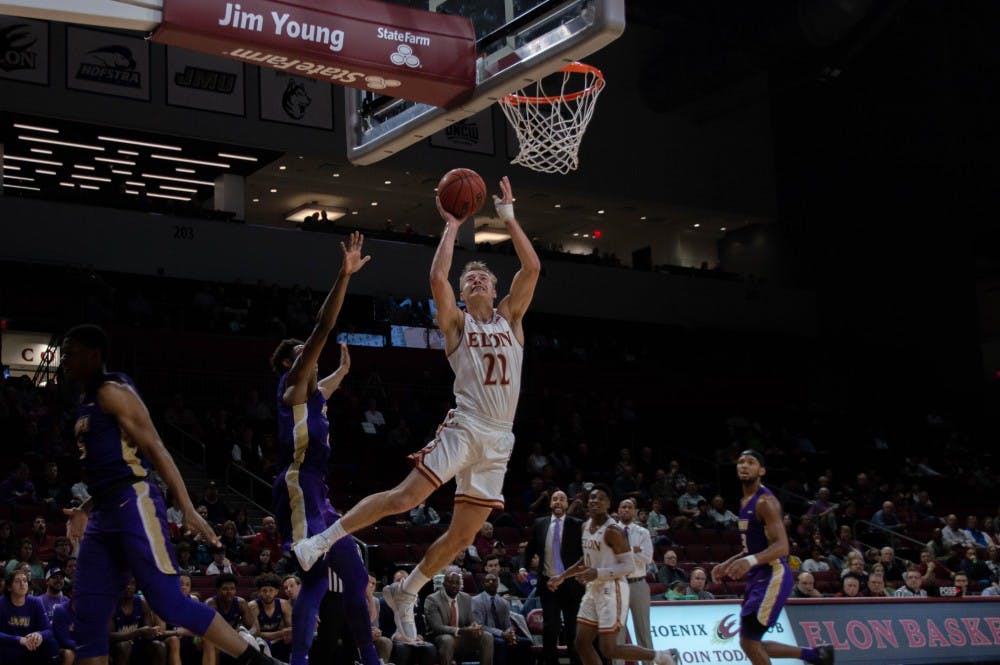 
Senior guard Steven Santa Ana goes up for an acrobatic lay up in Elon's 68-65 win over James Madison University on Sunday, Dec. 30 in Schar Center.

The Phoenix defeated the Dukes 68-65 in Schar Center after a decisive first half and hard fought second half. Elon sighed a breath of relief following the win, after losing nine of its last 11 games.

“We are so happy to get the victory,” said Elon head coach Matt Matheny. “Our guys are working so hard and it has been a really tough stretch but they have not wavered in their efforts.”

That tough stretch continued into this game, where the Dukes nearly overcame its nine-point halftime deficit. Senior guard Steven Santa Ana finished with 16 points but was just 1-3 on free throws. Those two misses came down the stretch at crucial times in one-and-one situations where the Dukes nearly took the lead.

Santa Ana missed a free throw with four and a half seconds left in regulation and the rebound was gobbled up by JMU’s Dwight Wilson. Wilson’s half court heave and bid at overtime fell just short, letting the Santa Ana off the hook for the missed free throw.

Senior forward Tyler Seibring paced the Phoenix for the win with 21 points on 6-9 shooting from the floor. The senior was sturdy from the charity stripe connecting on 8-9 free throws.

Despite being outrebounded handily 37-25 the Phoenix were still able to limp away with their first CAA win of the year. Elon will now travel north to take on the Drexel Dragons (6-9, 0-2) on Jan. 3, 2019.

Second Half: Elon holds off the Dukes

After a strong first half, the fire continued to burn for the Phoenix who led the Dukes throughout the rest of the game.

Even though Wilson’s and Matt Lewis’ solid shooting helped JMU claw its way back from Elon’s half time nine-point lead it wasn’t enough.

“I want us to be the hunter, not the hunted. I don’t like how we relax and how we get chilled. It is us against the world,” said JMU head coach Louis Rowe. “But what I do love is the resilience, these guys are very coachable.”

"I want us to be the hunter, not the hunted. I don't like how we relax and how we get chilled."

Wilson led the Dukes with 22 points and despite the loss, there were several moments throughout the game the Dukes were only a point away from tying it up.

“I wish we could have pressed more but we don’t have a lot of bodies right now, so we don’t do it as often as I’d like to,” Rowe said.

JMU’s press to tie the game was cut short by Seibring and Santa Ana who led Phoenix with 21 and 16 total points a piece.

“This is a huge step for us,” Seibring said. “We wanted to keep the lead we put together, but the fact that we came out with a win is huge.”

The Phoenix came out slow, finding itself down 8-0 less than two minutes into the game following some questionable shooting. Elon found the bottom of the basket on just one of its first eight shots. Senior guard Stuckey Mosley led the offensive charge for JMU, connecting on two three-point attempts to get the Dukes going.

Elon started off in trouble, finding themselves down 11-0 four minutes into the game. But the Phoenix rose from the ashes and used a 9-2 run to close the gap.

A Kris Wooten three closed out an 8-0 run for the Phoenix and put them up for the first time in the game with five and a half minutes left in the half. Elon went into the break on a 5-0 run and took a nine point lead, their biggest of the game, into the locker rooms.

The Phoenix led the Dukes 37-28 into the second half. Seibring led Elon with 11 total points and Dwight Wilson led the Dukes with eight.

Elon dropped their first CAA game 77-60 against Towson University on Friday, and the Dukes fell to the College of William and Mary on the same day.

The Phoenix last played the Dukes in February, losing 90-84 in the final game played in Alumni Gym. Elon is now 3-7 all-time against the Dukes, with their last win coming on Feb. 2, 2017.