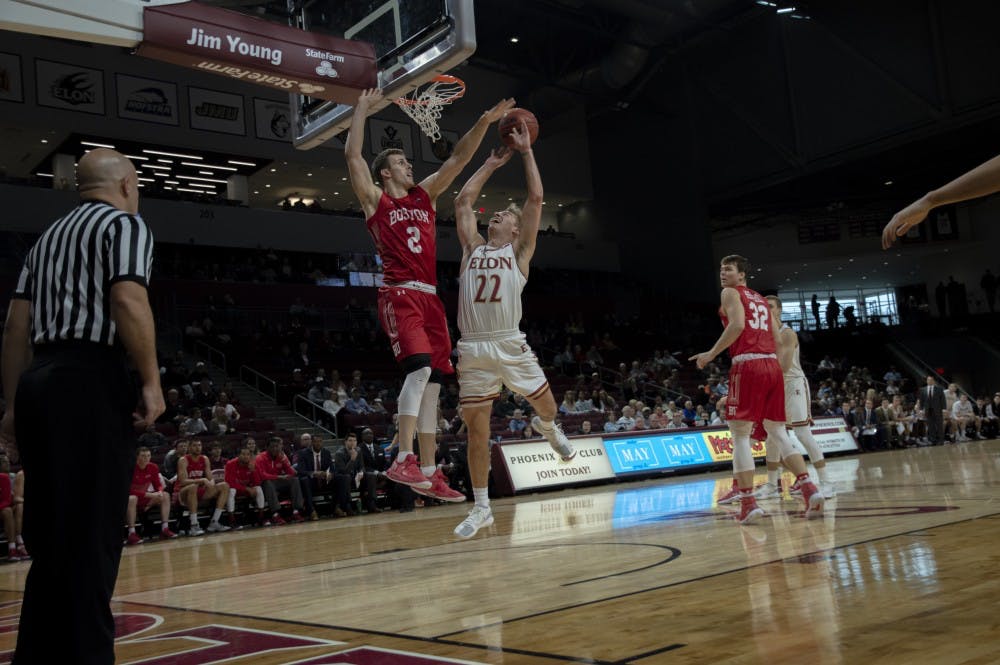 Despite a hard-fought battle, Elon University men’s basketball (3-5) fell to Boston University 65-58 at Schar Center. Elon and the Terriers went back and forth trading the lead in the second half, but in the end, mental mistakes proved costly, and Elon fell short of a big win for its Saturday matinee.

“It’s tough to stomach that we couldn’t finish it off in round 10,” said head coach Matt Matheny of the loss.

Pretty is not a word that comes to mind when describing the first half of play. The Terriers opened play on an 8-2 run before Elon was able to settle in. Some poor shooting on both sides was able to keep the game tight through the first 10 minutes of play. Elon was able to draw back even at 9-9 after Boston University missed nine straight shot attempts over a two and a half minute span.

Boston University used a 15-2 run in the tail end of the half to regain its biggest lead of the game after the team found itself down by five. Elon was having trouble finding the net, but they were able to convert on the last three shots of the first half to make it just a three-point margin at the break.

Rebounding was an issue for the Phoenix in the game. Elon started its day getting out-rebounded 6-0 by the Terriers, and things didn’t get much better from there. Elon ended the half down 26-12 on the boards, including being overpowered and held without an offensive board. Things didn’t improve in the second half either. Elon got its first offensive rebound a minute and change into the second half and would only gather up one more board on their end the rest of the game.

“12 offensive rebounds by them is too many. But if you cut that down a couple, you can survive,” Matheny said.

“Unfortunately, we didn’t do a good job of preventing them. I just think we need to be a little bit more aggressive on the [offensive] glass. It's just a process, it’s a long season, a lot of ups and downs,” said senior guard Sheldon Eberhardt.

Senior guard Steven Santa Ana led the scoring for the Phoenix with nine points in the first half. Three of those points came as time expired in the first half off an inbounds play. Junior forward Max Mahoney paced the Terriers with 10 points heading into the second half.

Elon came out stronger at the beginning of the second half. Santa Ana scored nine of Elon’s first 12 points, the Phoenix were able to regain the lead in just five minutes of work. Elon capped off a 17-0 run with Eberhardt hitting two free throws.

The Terriers came right back, using a 16-4 run of their own to take back the lead with five and a half minutes left to play. It was BU’s first time taking leading the game since the 15-minute mark of the half.

“We were executing well, we were moving the ball well, it was a big focus after the first half. We wanted to move on offense better, and we were able to do that at the start of the second half. We had a good run, had a lot of momentum. Unfortunately, they had their run, and we weren't able to bounce back from that,” Santa Ana said.

With the game coming down to the wire, Santa Ana picked the wrong time to let his emotions get the best of him. With just over a minute left on the clock and Elon trailing by one, Santa Ana was T’d up for talking back to referee Michael Luckie.

Matheny offered his own interpretation of what upset Santa Ana, saying the guard was upset thinking he was stepped on in a scrum for possession, though noting he didn’t see it.

Boston junior forward Tyler Scanlon hit both of his free throws and made Elon pay for the lapse in judgement. One more basket for the Terriers put the icing on the cake and dropped Elon to 3-5 on the year.

“It was a tough finish to an otherwise entertaining game,” Matheny said.

Some of the usual suspects were rather quiet for the Phoenix on the day. Senior forward Tyler Seibring added just four points and two rebounds in his 31 minutes on the floor, which are noticeably fewer minutes than he normally gets. Fellow senior forward Karolis Kundrotas was held scoreless on three shots with four rebounds.

“We’re playing guys that aren’t playing a lot,” Matheny said. “Nathan Priddy is getting better … our offense is getting better.” Matheny also added, “It’s fun to coach this team because we’ve got so many things to work on and guys are willing to work on them and they’re playing together. We’ve got a lot of young guys we’re relying on.”

Elon is not going to get a break from tough competition next week. On Tuesday, the Phoenix welcome in the Furman University Paladins, a team that has beaten two of last year’s Final Four teams already this season. Then on Friday, Dec. 7, Elon will welcome in the University of North Carolina at Greensboro, who gave the No. 10 University of Kentucky Wildcats a scare while Elon played Boston University.