A Spartan bucket in the closing seconds thwarts Elon's comeback 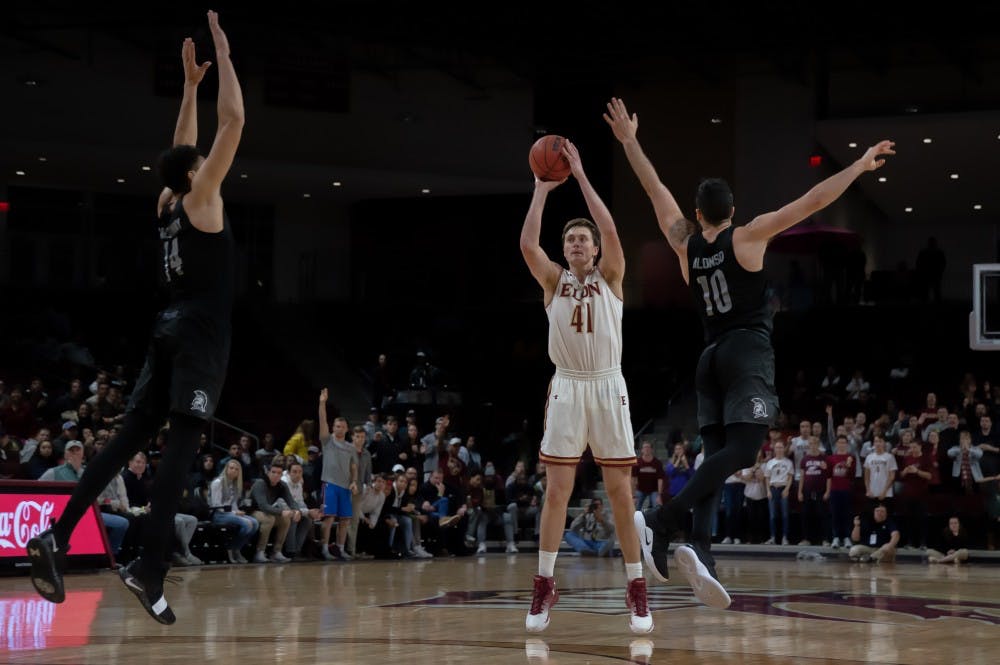 Elon University men’s basketball (3-7) fell short last night against the University of North Carolina at Greensboro Spartans, ending the game 75-74. The teams played on the same date they faced off against the Spartans last season — the same game that senior guard Dainan Swoope originally injured his ankle. What was a supposed ankle sprain that never properly healed proved to be false as Swoope is now facing a season-ending surgery on his ankle.

Swoope would be the least of the Phoenix’ problems during the game as the Spartans came out fast against the Phoenix. Their defense pressed hard against the Phoenix, sometimes pressuring players before they even got to the half line. The well-trained Spartans would wait for their coach’s cue before double- or sometimes even triple-teaming whichever Phoenix happened to have the ball. Elon head coach Matt Matheny tipped his hat to the Spartans on the team's ability to keep up a press like that for the whole game.

“It’s something that they’re good at," Matheny said. "They cause you to get out of your offensive rhythm.”

As the Phoenix started realizing that its usual three-point shots wouldn’t be effective against its opponent, the players started driving to the basket more, drawing the foul if nothing else was to come out of the drive.

Matheny remembered their last meeting against the Spartans. “Last year, [we] were very tentative against it, and as a result, we didn’t get many open looks,” Matheny said. But with intense preparation, they were able to “attack the pressure well and get good looks on the backend of pressure in a more aggressive way.”

The Phoenix was playing catch-up for the whole first half, often having to match the intensity that the Spartans were putting forward. This attempt to keep up often ended in poor passes, awkward shots or a combination of both. By the end of the first half, the Phoenix went 11 for 29 on field goals and a mere 5 for 18 from three. For a short time, the Phoenix managed to get a drive going and shorten the score gap to only three, but the Spartans took back their lead quickly. The Phoenix, though starting to gain some footing, fell short in the first half, going into the break down 43-35.

The Phoenix came out strong and significantly more confident in the second half, shortening the Spartans' lead to just one point for the first time in the whole game. Keeping the Spartans scoreless for their first five possessions, Elon looked like it was turning a new page.

Freshman forward Chuck Hannah, who had received his first start of his Phoenix career against the Spartans, was one of the players who greatly improved in the second half to keep the game alive for the Phoenix. “I go into any game I play, whether I’m starting or going in off the bench, I try to give energy and do the things that I do, which tonight was offensive rebounding and rebounding in general and trying to provide a toughness for the team to kind of go off of,” Hannah said.

It would only look to be going uphill from there for the Phoenix. A technical foul on the Spartan’s senior guard, Francis Alonso, with 13 minutes left opened a golden opportunity for the Phoenix to take its first lead of the game. When redshirt sophomore guard Seth Fuller stepped up to the line, he didn’t waste the chance and successfully put the Phoenix ahead 48-47. Just 30 seconds later, Fuller would step up again to push the lead to three.

When the Phoenix eventually pushed its lead to eight points, the Spartans started to wake back up and tied the game up with less than ten minutes to play. From there, back and forth play ensued until senior forward Tyler Seibring put in two baskets in a row to slightly push the Phoenix forward and get another drive going to lengthen the lead.

“Those runs are a lot of fun, a lot of it was just our team together making plays and having a fun time doing it,” Seibring said. Elon's fans could even feel the energy growing in their players and added to the excitement of the back-and-forth game. “The crowd was great today. We really appreciate feeding off of their energy,” Seibring said.

With less than two minutes left, Seibring answered, putting up a three to make it a one-point game in the Phoenix's favor, 74-73. With less than a minute left, the Phoenix defense was committed to keep the score as was in what they hoped to be the final Spartan possession, succeeding with two Spartan shot attempts.

After the second shot went up, senior guard Sheldon Eberhardt rebounded the ball while other senior guard Steven Santa Ana put his hands in a timeout motion, but not before the referee thought the Eberhardt had traveled when his momentum rolled him over with the ball still in his hands.

“We’ll go back and watch the film," Matheny said. "We would love to think that we should’ve gotten a timeout and all that stuff, but I thought the officials had a good game tonight.”

With the ball given back in their offensive end, Spartan senior guard Demetrius Troy drove to the paint and put up the jumper that would seal the Phoenix’s fate and end the game 75-74.

After the game, Matheny said his players still have work to do in some areas, but he didn’t seem upset about his team’s performance in the slightest.

“College basketball is just such a great sport. There’s highs and lows, and we’ve just challenged our players to stay the course and continue to improve as we are improving and to energize that a little bit. I’m really impressed with how our players have practiced in this tough stretch and how they performed tonight through mistakes,” Matheny said.

Elon will look to break its three-game losing streak when the team plays the Canisius College Griffins (2-6) on Dec. 16 in the final game of this current five-game home stand, starting the countdown to the final games before the start of CAA play.