Following presentations from an Elon Faculty Forward student ally and President Connie Book, the SGA has decided not to take a stance 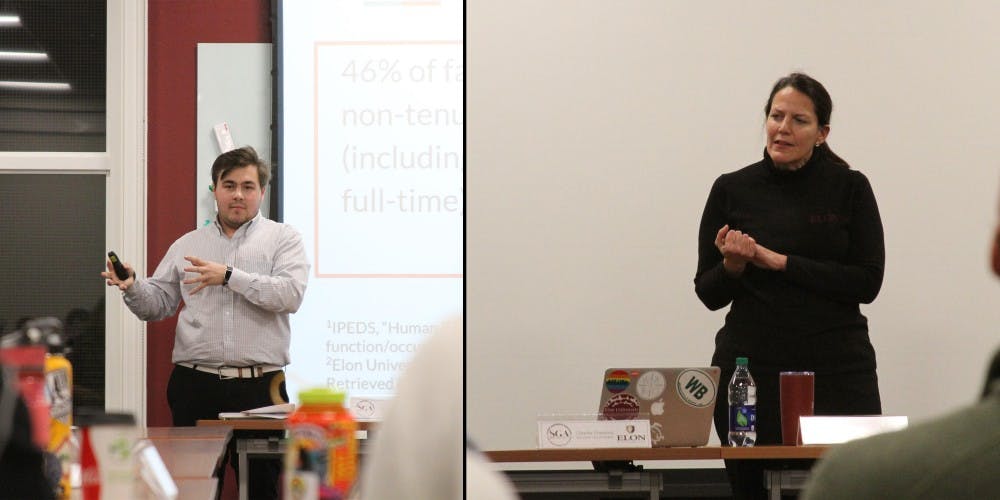 Photo by Anton L. Delgado | Elon News Network
Both sides of the Elon Faculty Forward movement to unionize were presented to members of SGA on Thursday, Dec. 6. Following the meeting, the organization released a statement publicizing their decision to remain neutral.

Following a week of statements from administrators regarding Elon Faculty Forward, the first item on SGA’s agenda during their Dec. 6 meeting was the movement to unionize.

Presenting both sides of the issue were junior Chris Adamik, a student ally of Elon Faculty Forward and President Connie Book, who has spoken out against the union formation. Following their presentations, both speakers engaged with SGA members through a Q&A.

The purpose of the presentation was to inform the SGA on the issue. Following the meeting, Executive President Kenneth Brown released a statement confirming that the SGA would not be taking an official stance on the issue.

“Ever since this arose last week, we have been meeting and discussing in our own personal time and as an exec board just to learn more and be informed. As individual students you can take whatever stance you want. But as a student government, we will not take a side on this issue,” the statement said.

According to Brown it would be improper for SGA, as an organization to take a side.

"This is something the faculty has to process and go through. If it goes to a vote, we don't have a say," Brown said. "We'll be watching it closely to see what happens... It would be kind of inappropriate to take a side."

Adamik was the first presenter at the meeting and as a student ally, he represented the 270 students that have signed a petition in support of Elon Faculty Forward. Adamik’s eight-minute presentation focused on the background, purpose, necessity and potential future of a union.

The focal point of Adamik’s speech were the emotions behind the movement. He shared personal anecdotes from three of his professors. Each of whom are non-tenure-track faculty who have gone public with their support for the union.

Adamik also addressed the statements made by administrators about Elon's shared governance system, Academic Council. This is a committee of elected faculty members who formulate policies regarding issues affecting faculty.

Of the 20 division representatives on Academic Council, there is one spot designated for a part-time faculty member — not nearly enough according to Adamik.

“If Academic Council truly is a just organization supporting [none-tenure-track faculty's] decisions and concerns, the vote would theoretically be no,” Adamik said. “But if it was not an effective tool to help them, the vote would be yes and they’d finally be able to voice their opinions.”

Following his presentation, SGA members asked Adamik 10 questions. Many of which focused on the financial implications of the union such as possible tuition increases, scholarship cuts, class size growth, and other fiscal issues. Some of these questions were left unanswered.

“I was in charge of the Student Alliance, so the whole fiscal stuff is way above what I know,” Adamik said.

He was followed by Book, who wasn’t present during his presentation and Q&A session.

To begin her presentation, Book mentioned the legal restrictions she had in regard to what she could say. After Elon Faculty Forward filed an election petition to the National Labor Relations Board, a federal law was engaged that has kept Book from being able to speak her full mind.

“I can not say anything that is perceived to take action based on the issues that have been presented,” Book said. “I am not able to speak directly about some of these things. Even though I am speaking tonight with you as students and not potential voters, I want to assure nothing I say tonight could jeopardize the process for a fair election.”

Book focused her speech on the current benefits provided to faculty, the school’s shared governance system and higher education practices.

According to Book, 27 percent of Elon faculty are part-time. Book says, higher education uses a system of part-time faculty to compensate for "the dynamic of student enrollment numbers."

Nearing the end of her presentation, Book shared her personal views on the timing of Elon Faculty Forward's movement and its first public event hosted on Nov. 29.

"I was frustrated that there wasn't any advanced notice of the union rally on campus and the petition. I value transparency and I value due process," Book said. "Both were intentionally staged at the busiest time of the semester when students and faculty were in their classes taking exams to minimize our dialogue."

A dialogue Book is trying to increase by presenting both to student organizations such as the SGA, and to the faculty at large. Book is planning to focus the Dec. 7 monthly faculty meeting on the union movement.

Following the presentations, the SGA continued their meeting shifting focus to the debate regarding a new budget allocation model.