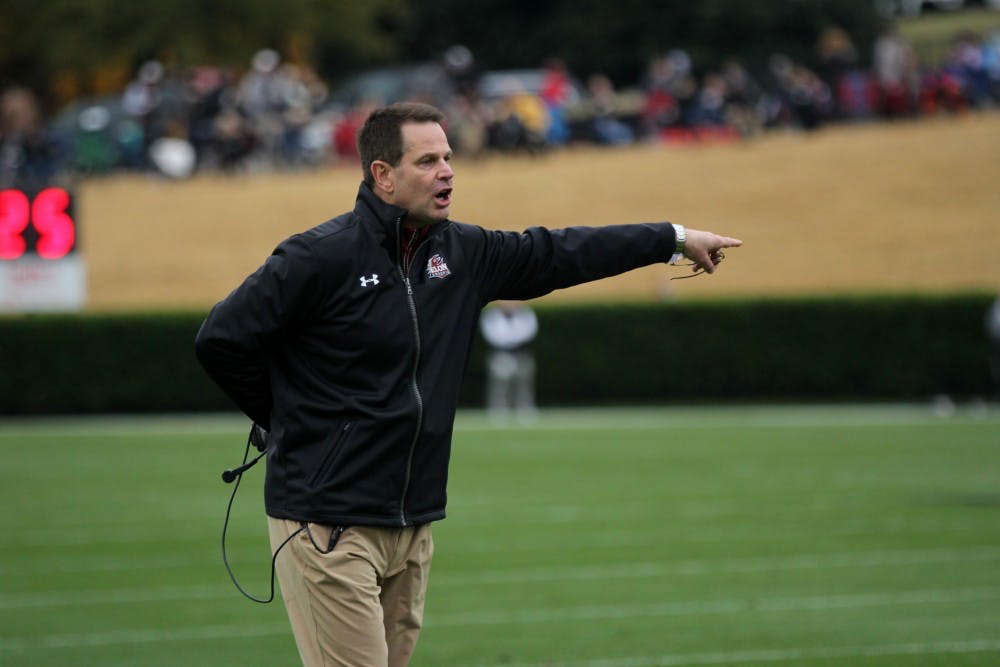 Photo by Erik Webb | Elon News Network
Elon Head Coach Curt Cignetti points to the field as he tries to argue a ruling from a referee during Elon’s FCS playoff game against Wofford College. Photo by Erik Webb.

Curt Cignetti has resigned as the head coach for Elon University football and has signed on as the new head coach for in-conference rival James Madison University. Cignetti went 14-9 in his two seasons with the Phoenix and led Elon to back-to-back FCS Playoff appearances for the first time in the program’s history. Cignetti’s landmark win in his time at Elon came over his new team when Elon went to Harrisonburg and beat the Dukes 27-24.

"While we are disappointed with Coach Cignetti's decision to depart Elon, he has helped build a successful program with a solid foundation and we are appreciative of what he and his staff have accomplished,” wrote director of athletics Dave Blank in a press release.

The head job for the Dukes was left vacant at the end of this year when Mike Houston left the gig to take over for the East Carolina University Pirates. Houston led JMU to back-to-back 14-1 seasons and won a national championship in 2016 in the course of his two years at the program.

This will be the second time in four years that Elon is saddled with a holiday season search committee for a new football head coach. The last time the Phoenix needed a new leader was nearly two years ago to the day when former head coach Rich Skrosky resigned to take a job coaching at Florida International University.

Blank said in the press release that “a national search will begin immediately to find the right person to continue our progress," and “our next head coach will join Elon University at an exciting time.”

Elon University Athletics has not made Blank available to Elon News Network for further comments outside of the initial press release.

There could be even more changes coming to the roster past Cignetti too. Offensive linemen coach Damian Wroblewski, linebackers coach, Bryant Haines, defensive line coach, Jerrick Hall, and defensive backs coach Ryan Smith, are all reported to be headed north to James Madison University with Cignetti.

Wroblewski has been with the Phoenix since 2014 when he took over its offensive linemen. The offensive line has been one of the keys to the Phoenix success in the recent years, including seeing Ikenna Nwokeji sign a rookie free-agent deal with the Steelers last spring. This past year was no different for the offensive line, seeing senior offensive linemen CJ Toogood and Oli Udoh picking up All-CAA first team honors following a stellar season. Weoblewski is Elon’s longest-tenured assistant.

Haines came to Elon via the University of California at Davis in 2017 and helped coach junior linebacker Warren Messer to all-conference and all-American honors. Hall is in his second stint with Elon. He coached the defensive line before departing for the University of New Haven in 2014. He returned to the Phoenix in 2017, holding his opponents to just over four yards per rush this past year and racking up 32 sacks. Smith also stepped Under the Oaks in 2017, and his group in 2017 was responsible for eight of Elon’s 10 takeaways that year.

Elon Athletics has refused to confirm the reports of these departures.