The battle for the 6th Congressional District

Mark Walker, a Baptist minister who has held office since 2015, is being challenged by 28-year-old Ryan Watts, a UNC business school grad who says it’s time for a change in leadership. 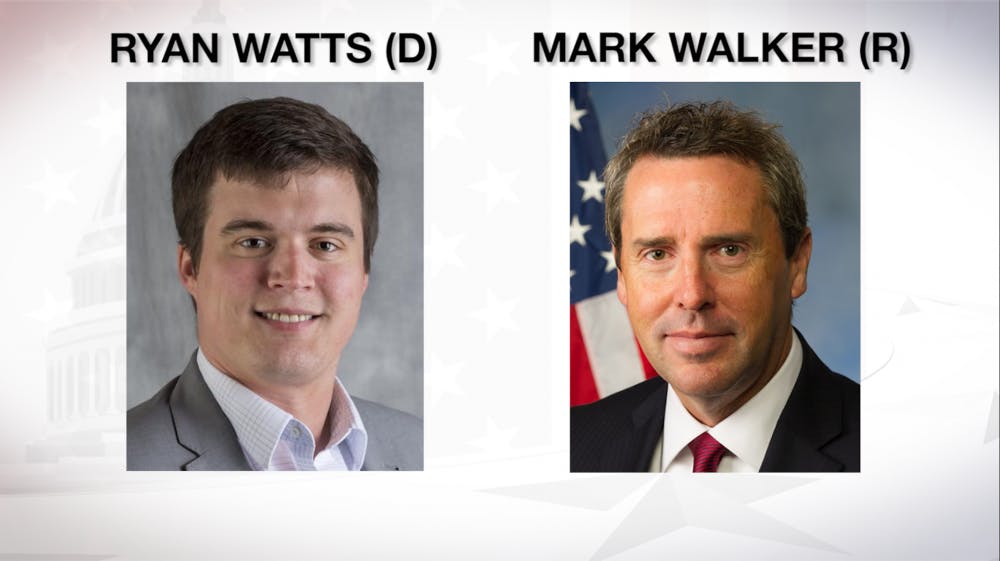 In North Carolina’s sixth congressional district, a two-term Republican incumbent is up against a young Democrat looking to shake things up in Washington.

Mark Walker, a Baptist minister who has held office since 2015, is being challenged by 28-year-old Ryan Watts, a UNC business school grad who believes it’s time for a change in leadership.

After almost four years in office, Republican incumbent Mark Walker said one of the achievements he’s most proud of is co-sponsoring the Miscellaneous Tariff Bill.

“One of the things that we were instrumental in leading was reducing and removing the tariffs for manufacturers throughout the state of North Carolina,” Walker said.

Walker’s main platform is job and economic growth for North Carolinians. He’s strong in his conservative beliefs — the Lugar Center Bipartisanship Index  labeled Walker one of the least bipartisan congressmen in 2017. He’s ranked 427 out of 438.

He’s been working as a marketing and management consultant with Deloitte while campaigning and said his business background helped him prepare for politics.

“It's about bringing people together and coming up with solutions. That's what I do for a living. And I think that the experience will serve me very well in Congress," Watts said.

Throughout the campaign, Walker has had a significant fundraising advantage. As of October 17th, Walker had raised $1,228,751.58 while Watts had raised $328,694.01, almost a million dollars less.

Walker said if re-elected, one of his top priorities will be fixing what he calls a broken immigration system. He has previously voiced his opposition to amnesty for people here illegally and has voted to increase funding for border security and making cuts to the number of legal immigrants allowed in.

Watts said he wants to protect Deferred Action for Childhood Arrivals (DACA) recipients and investigate but not abolish ICE.

“It's time for us to create an 'earned citizenship program,' which would strike a balance between Republican and Democratic ideas," Watts said. "It would create a pathway to citizenship for people who have been in this country for long periods of time, who have paid their taxes and abided by the law, never had any issues."

Watts said his top priority would be to eliminate partisan gerrymandering.

“We need to address fair districting for this republic and this democracy to thrive,” Watts said. Though the districts are drawn by the state legislature, Watts said he’ll work to create a federal law outlawing the practice.

“We can require that every state form a nonpartisan, independent redistricting committee — which would have to abide by what the Supreme Court has now deemed to be illegal which are racially or partisan drawn districts — so that’s how the federal government can get involved,” Watts said.

Both candidates have recognized the cost of college can be expensive. Walker said he supports limited debt forgiveness, but only for people who work in a particular profession for a certain number of years. In Washington, he’s on the bipartisan Historically Black Colleges and Universities (HBCU) caucus and has advocated for the creation of more Pell Grants, which provide aid to low-income students.

“I think the number one thing is to make sure that we're looking at overall cost, not just on the side of as far as borrowing, but what we do as far as lowering the cost of the universities,” Walker said.

Contrary to Walker’s scholarship approach, Watts said he wants to force banks to lower the interest rate on student loans.

When it comes to gun control, the National Rifle Association has endorsed Walker with an A rating. Watts has an F rating from the NRA and said would he propose connecting background checks to federal databases. Watts added that he supports the Second Amendment and is a gun owner himself.

“I want to make sure that you, as a law-abiding citizen, have the right to own a gun,” Watts said.

Watts owns a 20-gauge shotgun that he keeps in his home for protection, as well as a 40-gauge Smith and Wesson handgun. He doesn’t usually carry it but has passed a concealed carry class.

Other significant issues on Walker’s platform include growing the economy and lowering taxes. He's said he's also active in his faith and a part of the Congressional Prayer Caucus.

Watts said he wants to make Medicare a public option for health care, but said he won’t promise Medicare for all because he thinks that’s unrealistic.

FiveThirtyEight has predicts that Walker will keep his seat in this election. In the 2016 election Mark Walker, won almost 60 percent of the votes in his race against the Democratic opponent, Pete Glidewell.

When asked what he thought about the odds being so against him, Watts remained optimistic.

“I don't put much stock in polls. I put stock in people. And what I have seen in early voting turnout is a lot of enthusiasm in our favor,” Watts said.

During their campaigns, neither candidate ran TV ads, but both had volunteers making phone calls, knocking on doors and giving out yard signs to donors.