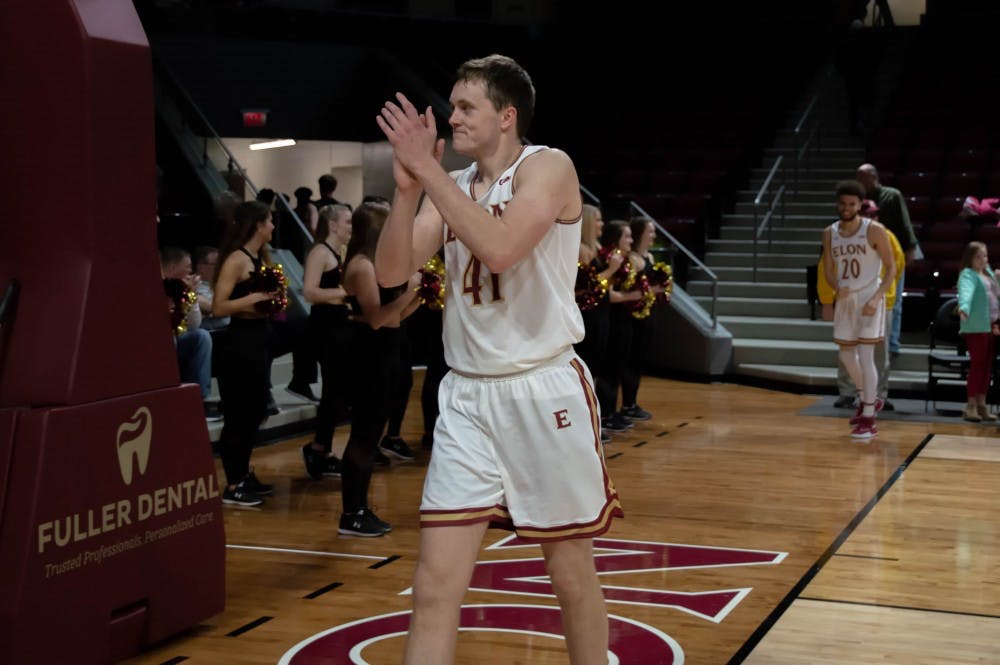 In the first half, the Phoenix made its presence very well known against the Buffaloes. The Phoenix seemed to be working as one person, knowing where each of its players would be at each exact moment, and the Buffaloes couldn’t seem to catch up.

“It's a level of trust that we have in each other, knowing that when you fully commit to each other it's kind of an expectation that we kind of know where guys are… [that trust makes it] easier to seamlessly move the ball and know where guys are,” said freshman forward Chuck Hannah.

At the beginning, Milligan seemed comfortable with allowing Elon to take their shots from three-point range, but the Phoenix gladly took advantage of it, shooting three three-pointers in a row with junior guard Dainan Swoope, senior forward Tyler Seibring and senior guard Steven Santa Ana each taking part in the streak.

“We come out confident all the time, so making shots will just be a reoccurring thing for us,” said senior forward Karolis Kundrotas.

Seibring wouldn’t stop there. By the end of the half, Seibring shot over 93 percent from the floor, making eight of nine attempted field goals and all five of attempted threes. Head coach Matt Matheny spoke very highly of his guard.

"Tyler has a desire to be great in anything that he does," Matheny said. "He wants to be great and when you have a guy like that leading your team you really have a chance."

Milligan tried to keep up with the inextinguishable Elon offense, but nothing seemed to be able to stop them. When on offense, Milligan’s senior forward Aaron Levarity seemed to be the only source of light, but his 20-point contribution fell short when the rest of his team couldn’t add to it.

The second half started off with Elon maintaining the momentum with which they ended the first half, opening the second half the same way they did the first: with a three-pointer. The Elon defense remained tight and their offense crisp, not allowing Milligan much breathing room anywhere on the court.

But about halfway through the second half, Elon started to lose steam. The team never lost its lead, but the stamina it had been maintaining declined.

“We didn’t shoot great in the second half. ... It’s not something I’m upset about, it's just interesting,” Matheny said. “First, Milligan is pretty good. ... I think they’re a good team. And then, with a big lead it's hard to continue to be as sharp, so I think those two things really contribute to them cutting into our lead.”

“There’s always something you can take from any game, even when winning by 27, there’s always going to be things that we look at and try to take into the next game, to try to get more of those good wins for us," he said.

Next, the Phoenix will play in the Tiger Thanksgiving Tournament in Stockton, California, facing off against Abilene Christian (3-0), University of California, Riverside (0-3) and Pacific University (3-1).

Kundrotas says the biggest challenge for the team going into the tournament “is going to be keeping the same energy and bringing that same togetherness, the same fight that we showed tonight.”