Harlem Globetrotters kick off homecoming weekend with a bang

Students and audiences of all ages pile into Schar Center for nonstop entertainment from “America’s Favorite Basketball Team”. 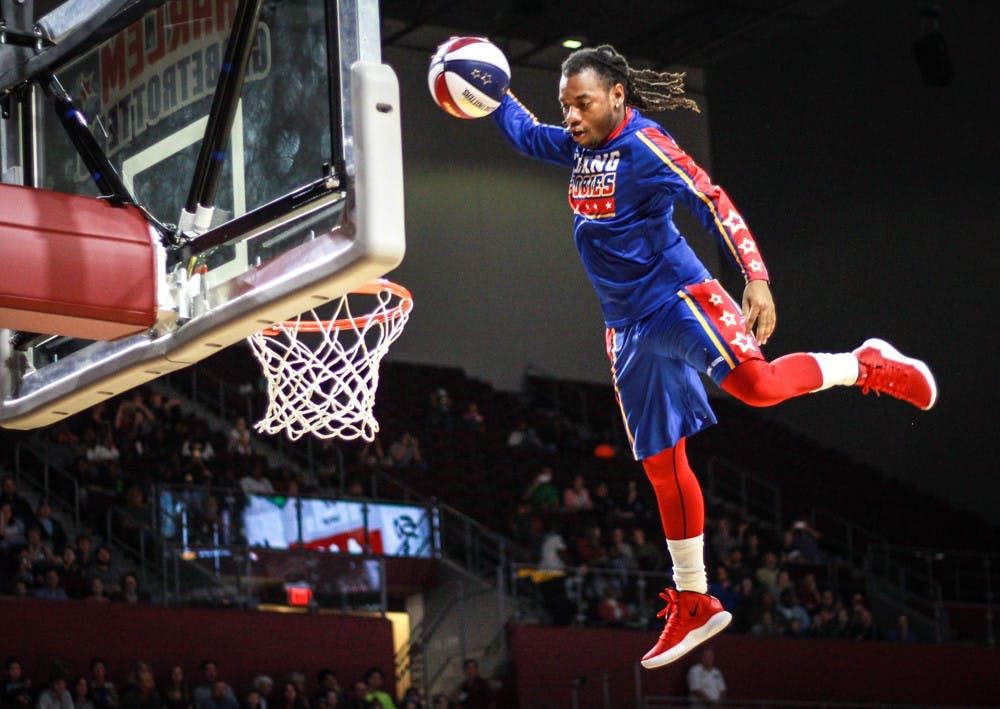 Hammer Harrison dunks the ball during the dunk showcase with the Harlem Globetrotters in Schar Center on Thursday, Nov. 1. [Abby Gibbs].

On Nov. 1, Elon University welcomed the theatrical basketball team, the Harlem Globetrotters, to perform on campus. The game successfully created an excited atmosphere for Homecoming weekend, and got students ready and looking forward to the rest of the activities to come.

The Globetrotters were created in the 1920s as a team of fully African-American players, and eventually chose their “home” to be Harlem, New York City, since at the time Harlem was the center of African American culture. Facing off against the Globetrotters was the Washington Generals, a team created to be the team the Globetrotters played against when they toured.

Few students actually knew what the Globetrotters truly were, including freshman Megan Siegel, who said, “I don’t really know what I’m getting myself into, I know they do some cool tricks and play basketball”

Nevertheless, the Globetrotters brought a fun and entertaining atmosphere, often involving the younger fans in the audience, like in the first quarter when three players brought a little girl onto the court and skipped around with her and taught her some of their tricks.

The Globetrotters ran circles around their stooge team, scoring four “four-pointers” in a row, which the team created as part of its routine. It's a shot taken from 30 feet away from the basket as opposed to the normal 23 feet and 9 inches typically seen in games.

Harlem Globetrotters’ showman, Big Easy, was at the center of all of the entertainment, having fun with players, referees and audience members alike. He kick-started most of the jokes and kept them going with his immense charisma and comedic skills. Pulling a married couple out from the first row in the second quarter, he proceeded to teach them dance moves that “they would need to know to keep their marriage going."

In the third quarter, the Globetrotters began a dunking contest, where three players showcased their athleticism. A trampoline and mat was set up in front of the basket. Going one at a time, they would each go and showcase a trick before their dunk, which ranged from twists, turns, alley-oops, and even flips.

Senior Kenneth Brown loved every second of it, saying his favorite part of the whole game was “all the dunks because that’s what I want to do, just dunk all day.”

“I [thought] it was really fun," said freshman Christina Romagnoli. "I was laughing all night.”