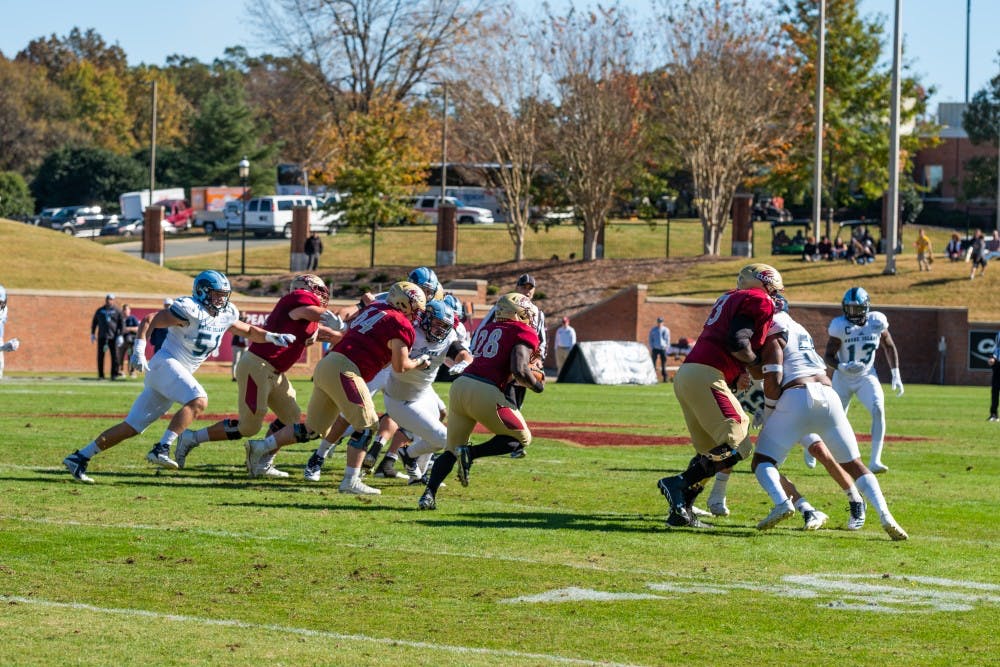 Photo by Liam O'Connor | Elon News Network
Junior running back De'Sean McNair cuts through a hole in the offensive line in Elon's 24-21 win over the University of Rhode Island during Homecoming Weekend.

As soon as Jaylan Thomas found a hole and darted toward the end zone, he had one goal in mind — not to get tackled.

Less than two minutes remained in the first half, and Thomas, Elon’s true freshman running back, received the handoff from quarterback Jalen Greene deep in the Phoenix’ territory. Thirteen seconds and 86 yards later, Thomas scored Elon’s longest rushing touchdown of the century, cutting straight through the University of Rhode Island defense and the outstretched arm of Rams linebacker Branyan Javier-Castillo on Homecoming afternoon.

That gave Elon a 14-7 lead, a lead the Phoenix never surrendered as it won 24-21. Thomas’s 222-yard rushing performance sparked No. 6 Elon’s (6-2, 4-1) fourth consecutive home win of the season, though it wasn’t the prettiest game coach Curt Cignetti had ever seen.

"Well, we'll take them how we can get them,” Cignetti said. "There were a lot of great efforts out there."

Thomas’s massive yardage comes as Elon’s starting running back, Malcolm Summers, is sidlinened for the remainder the season with a nagging hamstring injury. Thomas and De'Sean McNair, who rushed for 61 yards and a two-yard touchdown early in the second quarter, picked up the slack for his teammate. In total, the Phoenix rushed for 319 yards but only threw for 35 yards on 10 attempts from Greene. But despite the inefficiency in the air, the Phoenix continued to score through the ground and on defense.

The Phoenix found its groove then, but it took more time than usual. Saturday was the first time all season Elon did not score on the opening drive, and that gave Rhode Island the chance to strike first. Lawson threw for 349 yards, and more than half of them were targeted to Parker. He received 190 yards and scored three times, including an 82-yard catch and run reception near the end of the first quarter. He added two scoring receptions of four and 20 yards in the fourth quarter, despite Elon’s seven sacks and numerous quarterback hurries.

"We definitely know they like to throw the ball and all of the coaches were calling pressures and we just had to try and disturb him," Messer said. "We’ve always said Rhode Island  was a dangerous team when Lawson is back there and he's a great player, but we just had to get him off his momentum and it was still hard to do."

Cignetti said he and his team will celebrate this victory before preparing for Towson University next week. And with the Football Championship Subdivision Playoffs approaching, he said he is glad things are starting to click and people are gelling as a cohesive unit.

"We talk as a team, a team is bigger than one or two guys. A team is a team and the team's full of intangibles," Cignetti said. "And what we have is a bunch of guys that are confident and a lot of good players and you know, a lot of unsung heroes on his team."