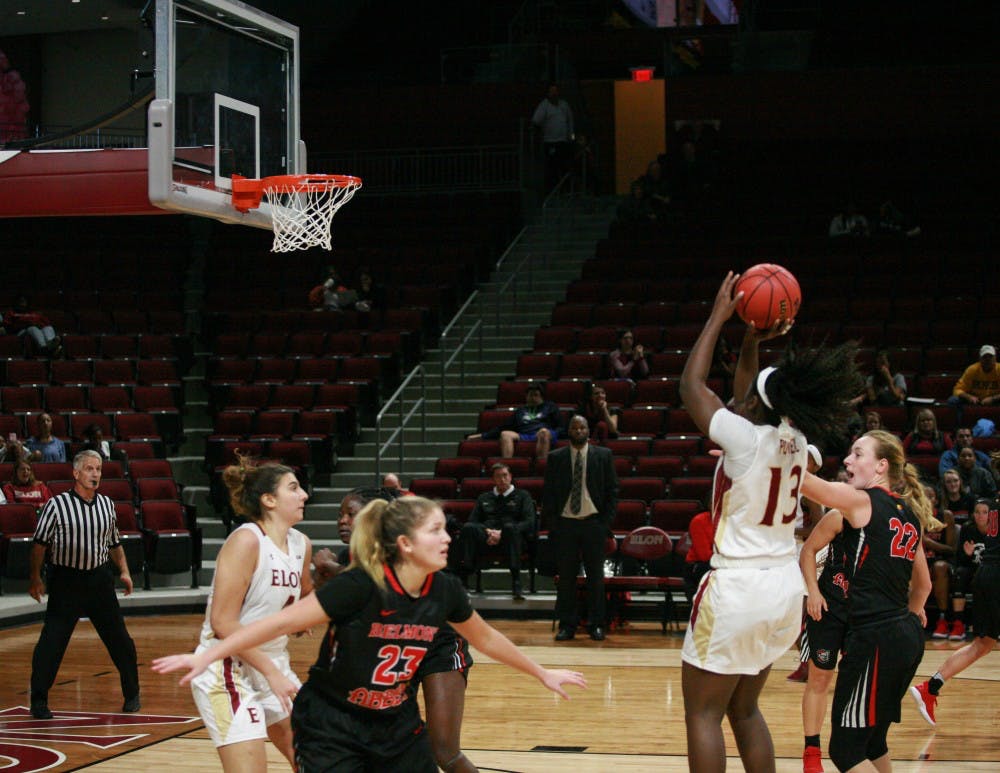 
No. 13, Jaylin Powell, breaks through defenders to shoot for two during the Elon Women’s basketball opener against Belmont Abbey on Oct. 27, 2018.

The Elon University Phoenix had their first exhibition match against the Belmont Abbey Crusaders Saturday, Oct. 27. Elon was able to outlast the Crusaders 58-54 in the tune-up game.

The Phoenix commanded the game in the first quarter forcing lots of turnovers and capitalizing on 83 percent of its free throws made by sophomore forward Anna Popovic and junior guard Lexi Mercer.  With both teams playing a heavy man-to-man defense, it was difficult for either team to get shots off and even more difficult to make those shots count.

“We definitely dug ourselves into a hole in the first quarter and then we kind of woke up after halftime,” Mercer said.

The Crusaders were not able to have as many touches on the ball but were still able to lead Elon 13-12 after the first quarter.

The second quarter still swung in the favor of Belmont Abbey as the Crusaders started to monopolize the ball. Crusaders freshman center Kelli Thomas was a big presence on defense as she displayed superb play with an outstanding block on Elon sophomore forward Jaylin Powell. Elon started to pick up its pace toward the last minutes of the second quarter but could not seem to get the ball into the basket.

“They were really good at boxing out and was good about being tougher down there like there were times where we did try to box them out but they literally just roughed us off of it,” said junior guard Jada Graves.

The lack of shots made by the Phoenix seemed to change the intensity of Elon’s game, causing them to have to play catch-up in the second half.

The start of the second half erupted with newfound energy in both teams. The Phoenix were able to find their stride with multiple baskets from Mercer and freshman forward Micaela Ryan.

“We came out with a lot more energy in the second half. We were flat in the first quarter, we kind of thought that it would just be given to us I guess,”  Mercer said.

The Phoenix took the lead for the first time in the game off of Ryan’s three-pointer as the shot clock ran out, putting the Phoenix ahead 40-39 with under two minutes left in the third.  The Phoenix fouls on the Crusaders hurt late in the third quarter, changing who led the match multiple times before its conclusion.  As the third quarter was entering its final minutes, Elon’s sophomore forward Emily Maupin drained a three to give the Phoenix a 43-42 lead going into the final quarter of the game.

The fourth quarter showed some extremely competitive plays from the Crusaders and the Phoenix. Mercer, Maupin and Ryan all had standout performances throughout the game and helped to extend the maroon and golds lead through the fourth.

“Everything just started to flow a lot better when we started to communicate better with each other,”  Mercer said.

The two oldest players on the court, Mercer and Graves, worked hand in hand to push the score to 55-52 showing their leadership skills and familiarness with each other.  Belmont Abbey’s sophomore forward Allie Downing gave the Phoenix trouble keeping their lead with multiple three-point baskets throughout the game.  Mercer was able to keep the game out of the reach of the Crusaders with a perfectly executed three to lead the Phoenix to a 58-54 victory over the Belmont Abbey Crusaders.

The Phoenix now move on to their home opener of the season and the much-anticipated University of North Carolina at Chapel Hill in the Schar Center on Nov. 6 at 7 p.m.