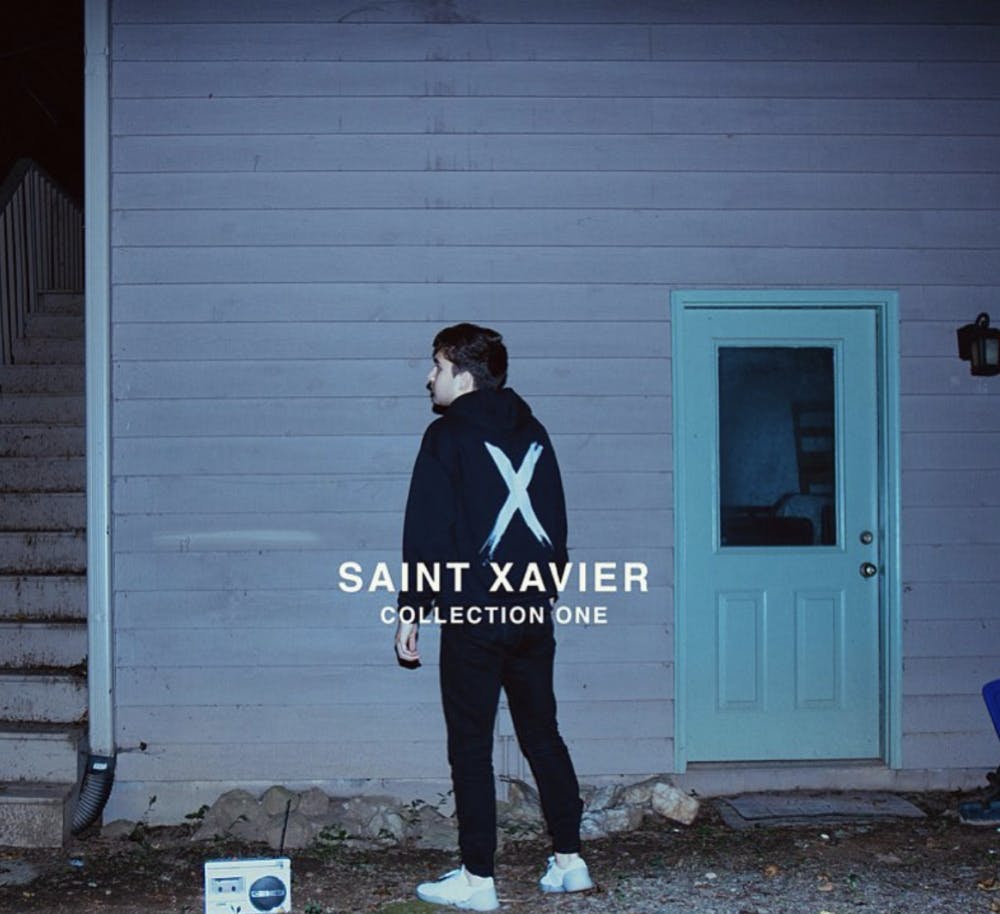 Senior Kaveen Solanki remembers joking around with senior Xavier Andrada, his roommate, at their College Station apartment about building a fashion brand. As they brainstormed ideas for this potential brand, they immediately created the name, Saint Xavier. The name is a combination of Andrada’s first name and the word “saint,” which Solanki thought was a good combination.

“We didn’t have a lot of time with school, and there were money constraints on both ends,” Solanki said.

Solanki says he began to take baby steps in the process since the idea first came up.

Through sleepless nights and trial and error for the past two years, Solanki took what was once a simple idea of having a fashion brand and made it a reality. Saint Xavier had its first clothing launch on Oct. 15.

The moment the website became available to the public that day at 5 p.m., Solanki says he was immediately on Google Analytics seeing how many people were viewing the site.

“Even if I sold a T-shirt or hoodie to five friends, that would make me happy,” Solanki said. “Seeing that random people I don’t know buying our clothing is really uplifting, and all of us are super ecstatic.”

As a business major who has had previous internship experiences in the fashion industry throughout his college years, Solanki was not new to the fashion scene. When starting the brand, he sought help from Mason Little, a friend with a fashion background whom he did business with in high school.

“Both of us always had a business outlook,” Solanki said. “It just happened that both of our paths kind of led us into fashion.”

Little, who is now a business partner in the Saint Xavier brand, also helps with the garment design and advertisement of the brand. Solanki and Little have led the project, while Andrada has taken an advising role. Since the brand is named after him, Solanki says all ideas and designs are run past Andrada for approval. When Solanki reached out to him with the idea of the brand, he says he trusted Solanki’s project because of the past network marketing and sales businesses they had done in the past.

“Fashion is my number one true inspiration,” Little said. “It’s like everything I want to pursue it in life, and [Solanki] knew that about me, so he definitely knew I was in the field for a few years learning about streetwear, learning about how to make garments, how to advertise and how to get the right people.”

Solanki says that as head designer and co-founder, he has been working on the brand conceptually for two years. As far as putting consistent effort into designing and marketing the line, the majority of the work occurred this past summer. The final designs of their first launch did not come out until two weeks before the Oct. 15 launch.

The first launch of Saint Xavier was inspired by Philadelphia streetwear. It features hoodies, three different T-shirts, and hats. In accordance with the colors and styles of streetwear, Solanki and Little kept the designs simple, with the “saint” logo and muted colors such as blacks, whites and grays. Just like Chanel has one red statement handbag, Solanki and Little have one product in a different color, a red hoodie.

“There aren’t really many Philadelphia streetwear companies,” Solanki said. “So, we kind of wanted to pay homage to that by really attributing the place we grew up in our clothing.”

When designing different garments, Little says he is usually inspired by places, architecture and nature.

“I just see that all around me, and I used that towards inspirations for my pieces, and sometimes it’s actually the community,” Little said.

Saint Xavier has two T-shirts specifically linked to Philadelphia. One has an illustration of Rocky Balboa, a popular icon for the city. Another one has the word “jawn” on it, which is city slang that refers to a thing, person, place, etc.

When Solanki first thought of the brand, he wanted it to be made of fully sustainable materials, but the high price impeded him to do so. Getting all three business partners on the same page in regards to the different aspects of the business has not been easy. While working on the line this past summer, Solanki was interning in Orlando, Andrada was in California and Little worked out of Philadelphia. Therefore, communication was key in the designing and marketing of the brand.

“Everybody is at different stages in their life,” Solanki said. “Not being together kind of hurts the process, and then I think the biggest constraint was really just from a monetary standpoint.”

Little says that competing with fast fashion brands like H&M, Zara and other up-and-coming Instagram brands is a challenge.

Beside finding the means to support Saint Xavier, Solanki has struggled to manage being a student and an entrepreneur at the same time.

“I think it’s super challenging, and it’s definitely the hardest part of starting this brand,” Solanki said. “It’s my senior year of college, so the balance between school work, work and fun is always a struggle.”

Planning, time management and knowing his priorities allowed Solanki to find that balance. On the day before the launch, he spent all night working on the line while also doing class assignments due that day.

“Being an entrepreneur isn’t for everybody,” Solanki said. “You have to know that going into it. It’s a lot of work. But if you’re okay with that and then really getting after it and just chasing it is the biggest thing.”

Planning the next steps

Now that their first launch is done, Solanki is already figuring out what is next for the brand in regards to the next launch, building its reputation and collaborations. Through the connections he and Little have made by working in the fashion industry, they have begun to reach out to media outlets, photographers, influencers, models and celebrities to get more exposure.

“I really want to give back to the community,” Little said. “Since the inspiration I got from Philadelphia is not exchangeable.”

Little hopes that with the potential growth of Saint Xavier, they can donate some of the funds to charities that support the homeless and students that attend under-resourced schools.

The long-term goal for Little and Solanki is for Saint Xavier to be made of fully sustainable materials. Both agree that this will set them apart from the competition. As they start seeing the results of the first launch, Little says the biggest reward for him is seeing someone wearing something he designed.

“That’s honestly the best feeling I could ever get from doing something I love,” Little said. “Someone is appreciating something I designed enough to wear it.”

Building one’s confidence through fashion is one of the reasons Solanki first got into fashion. So for him, the best part of seeing others wearing Saint Xavier is seeing the customers feel confident and liking the way they look and feel while wearing the clothes.