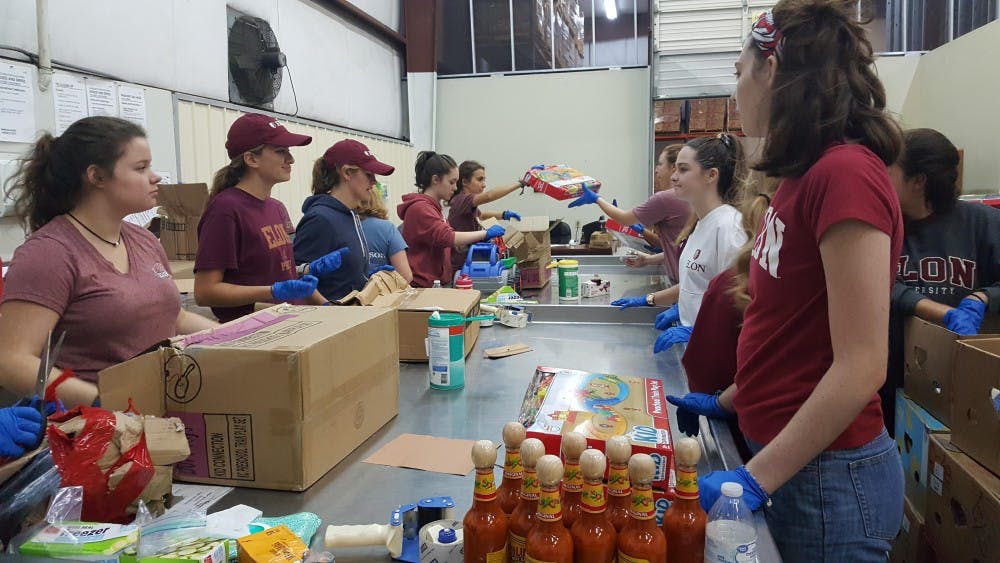 After the second major storm of the season, Hurricane Michael devastated communities in North Carolina. Elon University continues to take action by conducting research through Elon Poll and participating in hurricane relief service trips organized by the Kernodle Center.

Students and staff at Elon have been focusing on giving back to surrounding communities with lifelong partnerships and starting conversations about what can be done differently in the future.

Elon Poll conducted a mixed mode survey. Just under half of the interviews were done on campus, while the slightly larger half of survey responses were from people that Elon Poll recruited online. Students called people from all over the state through a registered voter list. This type of mixed survey would reflect a representative sample of the state’s population, which included young and old folks alike.

According to Director of Elon Poll Jason Husser, the survey served to achieve three main objectives.

“One was to find out how much people prepared for the storm,” Husser said. “Another was to find out what people plan to do for the next storm. We were curious to find out if Hurricane Florence changed people’s opinion about if they should prepare more or pay more attention to forecasters, and how they thought this storm was handled by political leaders.”

Husser said the last goal was “to find out what impact this storm had on policy preferences for the state.”

The poll revealed that North Carolinians were generally prepared for the high winds and heavy rains Florence brought to the state. Some of the surveyors said warnings given from meteorologists and government officials contributed to their preparation for the weather.

About three out of four registered voters said that the warnings leading up to the storm were on target, prompting them to prepare for future storms in the same way the did for Florence.

In terms of preparation for the storm, the most popular item North Carolinians stockpiled was bottled water — followed by flashlights, food, gas and cash, according to the results of the survey.

“In many ways, this was the perfect storm to test North Carolinians’ preparation,” Husser said. “Basically every community in the state, even the mountainous communities, still had forecasted that they were going to get wind. And as we saw from Michael, just because you’re inland a couple hundred miles doesn’t mean you’re safe from the storms.”

“We found that in the results of the survey, this is potentially a time where [the] General Assembly would have public support for looking into a number of policies to maybe make North Carolina more resilient to future disasters,” Husser said. “All of this information can be seen on the Elon Poll website.”

North Carolinians were most commonly impacted by power loss, as the survey found that around 40 percent of people statewide lost power at some point during the storm.

The survey also discovered that one in three people experienced wind or tree damage, and a quarter of those affected are still not receiving the help they need to recover.

A smaller percentage of people surveyed were displaced from their homes during the storm.

This is where the Kernodle Center has been taking action.

A group of approximately 20 students and staff met on campus at 10 a.m. on Oct. 20 to travel two hours to Second Harvest Food Bank in Fayetteville.

“As soon as we got there, we did some reflection, as this is a really important part of all service,” said senior Katie Mars, an Elon Volunteers student leader. “When we got inside, we were helping to sort donations. Since they support so many communities, they had a lot of donations flooding in that included a wide variety of items.”

Volunteers spent roughly three hours sorting through donation items, from shampoo and hygiene products to coolers and cleaning supplies. Everything needed to be put into their respective boxes before being distributed to communities in need.

The volunteers were also provided lunch by AraMark, which donated lunches in the midst of a busy week of preparation for the inauguration. Everyone on the service trip greatly appreciated this donation on AraMark’s behalf.

“The woman from the Second Harvest Food Bank who we were working with was working so hard to prepare everything that needed to be sent out to the devastated communities. You could tell that she has been really overwhelmed since the hurricane so being able to give back a little bit and relieve some of that burden was a pretty cool experience,” Mars said.

Mars helped to plan this trip and lead the participating students and staff in reflection discussions before, during and after the service to facilitate the tougher, more raw conversations that come with natural disasters. With this, Mars made this trip to Fayetteville a service learning experience, rather than just an opportunity to volunteer.

“This is a really important type of service because it’s so easy to distance yourself from things you don’t see affecting people right here on campus. It’s not something you play off as well. It happened a month ago or that happened years ago,” Mars said. “If we look at Elon Volunteers, we still have a relationship with an organization down in New Orleans, and we do hurricane relief there for an alternative break every year for Hurricane Katrina, which was years ago. So we need to remember that this is the start of a partnership that’s hopefully going to be long lasting.”

Efforts to rebuild after a devastation such as Florence run long-term, so the Kernodle Center is hopeful to continue building sustained partnerships within communities and move forward together. There is a chance that there will be opportunities for Elon students to provide relief to communities who were most recently impacted by Hurricane Michael, but this has not yet been confirmed.

Students can still sign up to volunteer at the next hurricane relief service trip to Second Harvest Food Bank in Fayetteville, scheduled for Oct. 27 on the Kernodle Center.