Goodrum and No. 13 UNCW take down Elon

Despite the Phoenix’s best efforts, the Seahawks beat Elon on their home field 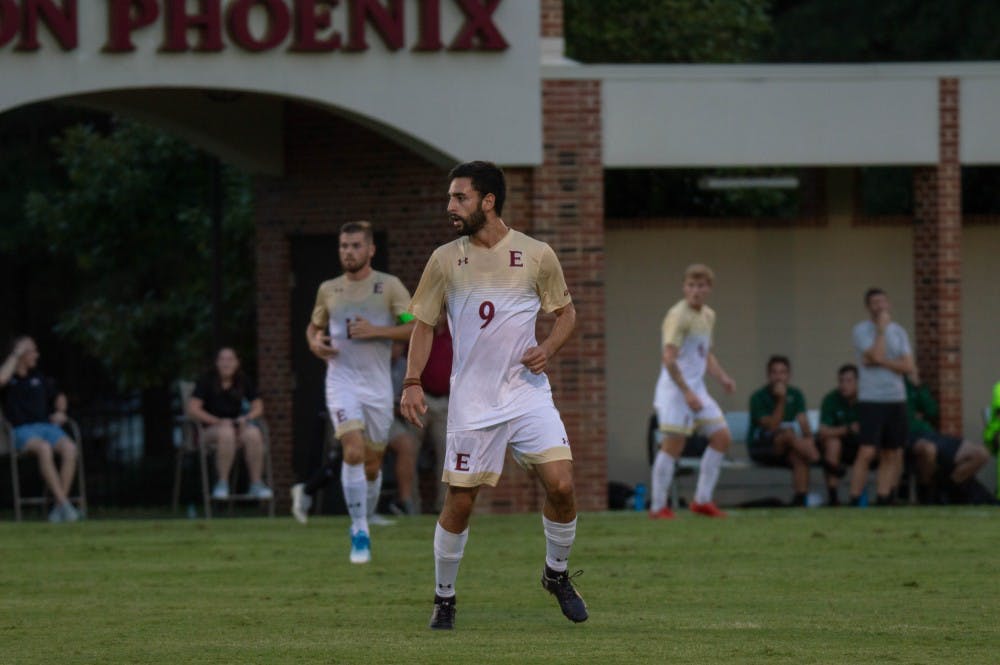 The Elon University Phoenix (3-7-1) took on the University of North Carolina Wilmington Seahawks (9-2-1) ranked No. 13 in the country on Wednesday night. In the on-and-off rain and intense humidity, the Phoenix were unable to break a six-game winless streak against the Seahawks who were yet to lose a game in the CAA conference, falling 2-0.

Drawing attention right away was the absence of usual starting forward, redshirt junior Iñigo Bronte. Head coach Marc Reeves said that “he’s holding a little injury, we have to be careful with him. ... We're trying to make sure we don’t hurt him fully and not have him for the entire season.”

Starting in his place was sophomore SahrFelix Sandy. Sandy did well with his fourth start of the season, causing havoc when needed, but was subbed out in the 18th minute, Bronte replacing him on the field.

The wet conditions forced both teams to adjust their playing style, as the long balls that both teams tried to play were either dying in the broken up grass or skidding on the slippery surface. The field conditions almost cost the Phoenix a goal when center defender Asger Andersen tripped and lost the ball to Seahawk forward, Elveroth Emil. Emil eagerly took a shot that was easily collected by redshirt senior goalkeeper, Matthew Jegier, instead of taking the ball in closer and really challenging the keeper.

The majority of the first half saw decent build-ups, but very little if anything to account for them. The defense on both sides remained strong with both sides’ forwards being prominently present. These lead ups fell flat most of the time, with the defenders usually clearing it long and hoping one of their teammate’s collect it.

By the end of the half, both teams seemed frustrated with the inability to create any shooting opportunities, but it was the Seahawks who rose up and took advantage of a defensive breakdown. Seahawk freshman forward Cesar Cruz crossed the ball to team captain junior forward, Phillip Goodrum, who tapped it past Jeiger who had come out to challenge Goodrum. With five minutes left, Elon pushed themselves to get an equalizer, but couldn’t come up with one as the first half ended 1-0, in favor of the Seahawks.

The second half started off quickly, with Elon eager to create chances and take shots in hopes of scoring the one goal they needed to be level again. All seemed well until in the seventh minute of the half, Goodrum had the ball just inside the 18 yard box, covered by two Elon defenders. Goodrum decided to take his chances which ended up going his way as the ball deflected off of one of the Elon defenders covering him. Jeiger, who was going the other way, didn’t have enough time to adjust to the shot and the ball trickled over the line, giving Goodrum his second goal of the night. Reeves noted that a deflection can be “very deflating” and “is something that's really unavoidable”.

After the second goal, the Phoenix found it hard to recover and regroup. Although consistently present in the Seahawks’ half, they couldn’t find the openings to create any decent chances, and UNCW’s defense ended up clearing most of what Elon created.

With ten minutes to go left in the half, Elon had drawn two yellow cards and six fouls but had only been able to take three shots. Elon ended the game with 11 fouls; UNCW had eight.

A third yellow card would come to Matthews when he challenged UNCW’s goalie, redshirt senior Ryan Cretens. Cretens’ nose needed to be clogged up to stop it from bleeding so he could finish what little time was left in the game.

With five minutes left to play, the Seahawks took over the Phoenix. At one point, three shots were taken in one play before the last was hit wide and out of play. The Phoenix managed to create one last chance for themselves, earning a corner kick in the last three minutes of play, but Cretens punched the ball out of play.

That would be the last true chance that Elon had. The game would end 0-2, keeping the Seahawks undefeated in the CAA conference.

After the game, Reeves said that UNCW “is a really well-coached team and a really talented team and they’re also exceptionally tough. They stay in games no matter what. ... They’ve obviously had issues to deal with the hurricane [but] we wish them the best.”

Looking ahead, the Phoenix have a lot of work to do to try to save what remains of the season. On Saturday, they’ll face the College of Charleston Cougars (3-7-2) and start their hunt for the last nine points that they can earn for postseason play.

“I’m actually pleased and proud of the way our guys are hanging in there," Reeves said. "... You can cower in a corner or you can keep stepping into the middle of the ring, stick your gloves up, and keep trying to fight harder.”