Football returns to the top 10

The Phoenix move up three spots following a win over Richmond 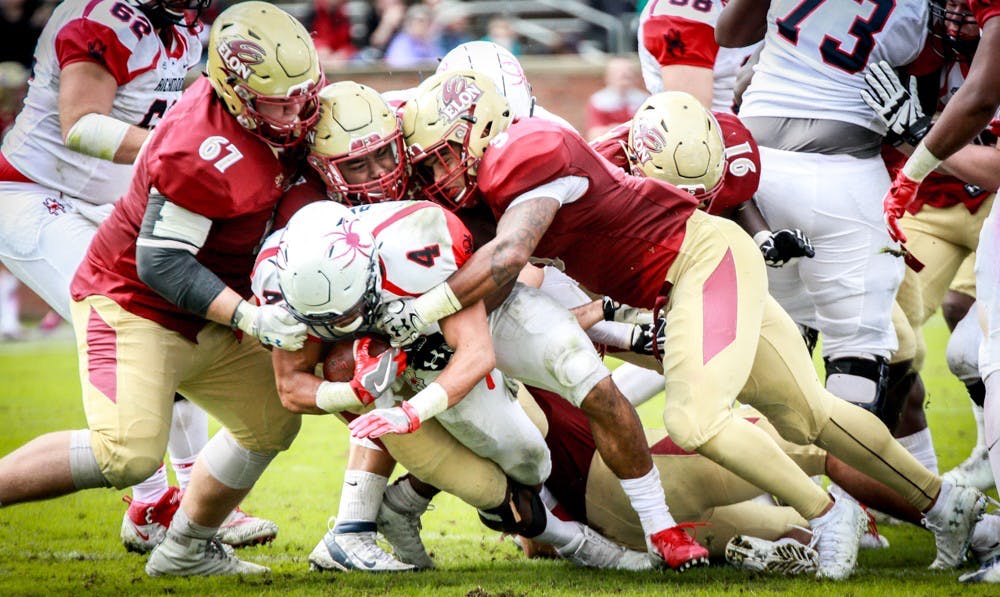 Elon University Football (5-2, 3-1) moved to No. 8 in the country in the STATS Top-25 poll and No. 6 in the FCS Coaches Poll following their win on Saturday over the University of Richmond Spiders 38-28. This is the third time this season that Elon has cracked the top 10 this season.

The Phoenix jumped up in the rankings following a rebound game on their home turf featuring some new stars. Sophomore quarterback Jalen Greene got his first career start against the Spiders following the season-ending injury sustained by Davis Cheek in the team’s loss to the University of Delaware. In the game Greene threw for 205 yards with just seven completions in the game. He also racked up three total touchdowns.

Freshman running back Jaylan Thomas also got the first start of his career following senior running back Malcolm Summers' injury to his hamstring in the team’s win over James Madison University. The freshman ran wild, racking up 150 yards on 27 carries, and two total touchdowns. Thomas picked up Colonial Athletic Association (CAA) rookie of the week honors for his efforts.

These two players look to be the men head coach Curt Cignetti will turn to on offense to get the team through the regular season and into the playoffs. Elon is the second highest CAA team ranked in the STATS Top-25 behind JMU who checks in at No. 3 this week. The CAA has six teams ranked in the STATS Top-25 poll this week, with Towson University (No. 10), Stony Brook University (No. 15), University of Delaware (No. 21) and University of Maine (No. 24) also cracking the top 25.

Elon has a bye week this week and will take on the University of Rhode Island (4-3, 2-2) on Nov. 3 at home during Homecoming Weekend. Elon will take this time to recover mentally and physically from a long stretch of tough road games.