Football falls on the road to Delaware 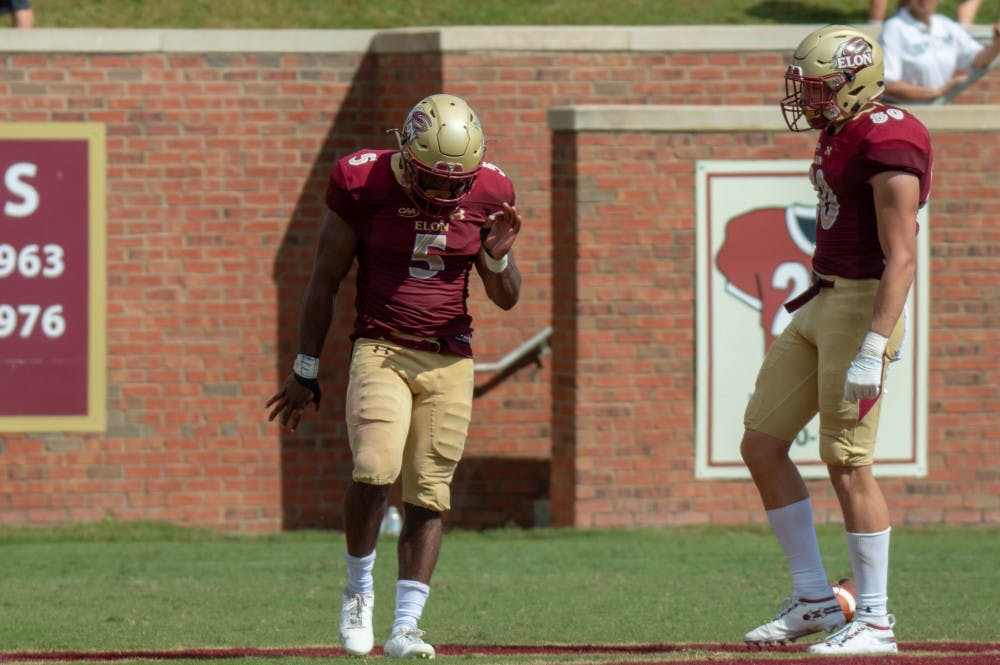 No. 5 Elon Football (4-2) fell to the University of Delaware (4-2) on Saturday 28-16. Elon was hampered by injuries that could prove to be much more costly than losing this game. This loss comes just one week after beating James Madison University in Harrisonburg, Virginia.

The biggest question mark of the game was why senior running back Malcolm Summers did not play. The leading rusher in the Colonial Athletic Association never saw the field. There was no indication before the game that Summers would not play, but it forced Elon to run the ball by committee for the entire game. Freshman running back Jaylan Thomas and junior running back De’Sean McNair split the brunt of the work with Summers out.

Elon’s defense stood stout in the first half, causing three turnovers and holding Delaware to just seven points. The turnovers started early with a forced fumble on the second play from scrimmage. Junior defensive back Daniel Reid-Bennett forced a fumble that was scooped up by sophomore defensive lineman Tristen Cox. These two tag-teamed the third turnover of the half as well.

Elon got on the board late in the first quarter when Greene connected on a 52-yard pass – the longest passing play of the season thus far – to junior wide receiver Cole Taylor to plant the team deep inside Blue Hen territory. Thomas was able to find pay dirt from nine yards out to give Elon a 7-0 lead. Freshman kicker Skyler Davis was able to knock a 25-yard field goal halfway though the second quarter to give Elon a 10-0 lead.

Elon almost escaped the first half holding its opponent scoreless, but redshirt-senior wide receiver Charles Scarff of Delaware was able to pull in a catch in the back of the end zone to bring the score to 10-7 at the half.

Elon received the opening kickoff of the second half, but they were unable to do anything with the possession. The Blue Hens took their first possession of the second half and made Elon pay for their inability to score. Taking just four minutes to drive nearly 70 yards, it was Scarff again with another touchdown, this time to give the Blue Hens a 14-10 lead.

Elon utilized Davis to stay in the game. Davis picked up another 25-yard field goal halfway through the third quarter and then a 38-yard field goal with under a minute to play in the quarter. With these, Elon headed into the final period with a 16-14 lead.

But Elon’s offense stalled from there. The Phoenix were held scoreless in the fourth quarter, and a visibly tired Elon defense was kept on the field for over 30 minutes in the game. Coming from a very physical game against JMU and being unable to get off the field resulted in a defense that ran out of gas in crunch time.

Delaware regained the lead with seven minutes to play in the game when senior wide receiver Vinny Papale hauled in an over-the-shoulder catch. Papale had four catches on the day, but this was undoubtedly his most important as it gave the Blue Hens a 21-16 lead. Delaware was able to keep the Phoenix at bay and get the ball back, looking to ice the visitors. A methodical six-play drive was capped off when senior running back Kani Kane rushed from two yards out for a touchdown. This was a dagger for the Phoenix, who needed a stop to have a chance on the team's final drive.

In desperation mode, Elon was unable to convert a fourth down attempt and returned the ball to the Blue Hens, who took a knee and commenced the party on their home turf. The Blue Hens remain undefeated against Elon, now beating them in all three meetings the two sides have had since joining the CAA.

Elon now will have to fight back into a position to try and win the conference. Coming into the game, Elon controlled their own destiny, just needing to win to become conference champions. They are not completely out of that discussion yet as they still have three currently-ranked teams on their schedule.

What will be more important is what Elon does without Cheek or Summers. Although no official announcement has come out yet about the severity of Cheek’s injury or about why Summers didn’t play, there's a chance these injuries could spell the end of Elon’s hopes of making a legitimate run in the FCS Playoffs.

Elon’s next game will be at home against the University of Richmond on Saturday, Oct. 20. Elon will look to bounce back after this loss and prepare for what could be the rest of the season without its star running back and quarterback.