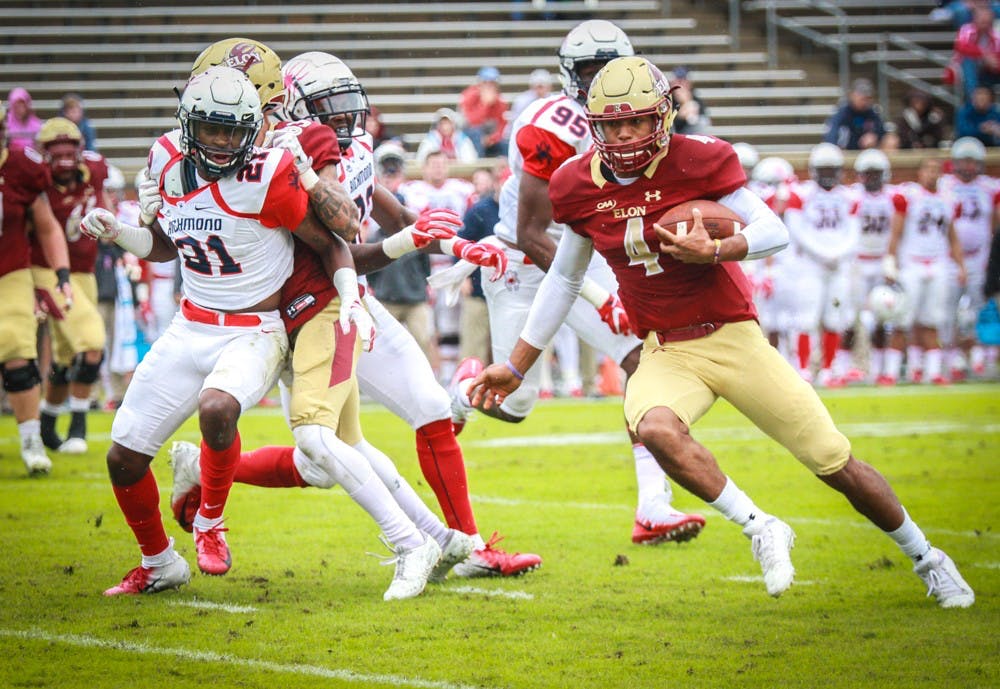 Quarterback Jalen Greene keeps the ball and runs past the Richmond defense to score a touchdown. [Abby Gibbs].

Elon football (5-2, 3-1) got back into the win column against a struggling University of Richmond (3-5, 1-4) at Rhodes Stadium on Saturday. An unfamiliar-looking Phoenix squad was able to prevail in a seesaw contest that went down to the wire.

The Phoenix defense forced a punt on Richmond’s first possession and started their first offensive drive on their own 20-yard line. Sophomore quarterback Jalen Greene, making his first start in place of the injured Davis Cheek, led the Phoenix to a ten-play, 80-yard drive, capped off by an 18-yard option run by Greene to put the first seven on the board.

The Spiders wasted no time striking back, only needing two plays and 41 seconds to tie the game at 7-7. Richmond redshirt sophomore quarterback Joe Mancuso, who was starting his third straight game, connected with redshirt senior wide receiver Caleb Drake for a 66-yard bomb.

After giving and taking a punch, the Phoenix responded with a quick drive of their own. Greene matched Mancuso’s previous throw, hitting a wide open senior wide receiver Corey Joyner for a 60-yard touchdown to push the lead back to seven. A well-run route by Joyner made the Richmond cornerback bite on a pump-fake to the outside, giving him eight yards of open field and plenty of time for Greene to rifle a pass his way.

“The corners were anxious at the beginning of the game, jumping up on hitches, and we took advantage of it and scored," Greene said.

The back-and-forth battle continued up until the end of the half. Freshman running back Aaron Dyke punched in a touchdown for the Spiders to tie the game at 14-14 in the second half. Then, a methodical seven-play, 87-yard drive was capped off by a 22-yard rush by freshman running back Jaylan Thomas, who also made his first start of his career to make the score 21-14 at halftime.

“The O-Line did an amazing job blocking, getting the blocks sealed, and when I saw it I just ran. It turned into backyard football,” Thomas said. He paused, smiled and said, “That’s what I like.”

Elon’s ground attack proved to be the driving force of their offense in the first half, despite the poor weather to start the game. Greene threw just six times in the first half, completing four of them for 108 yards. Greene’s ground presence allowed head coach Curt Cignetti to keep Richmond guessing as to how Greene would attack. The quarterback had more rushing attempts than passing attempts in the half. Elon’s 139 yards on the ground in the first half eclipsed the total they put up against Delaware last week.

The Elon defense was quieter than usual to begin the game. The team had zero sacks, zero takeaways, and just one tackle for loss. The secondary was burned on the Drake touchdown, with junior defensive back Daniel Reid-Bennett in tow, trying to make up for the blown coverage.

But the defense and special teams responded in the second half. Devonte Chandler forced a fumble on a kickoff following an Elon score, and senior Connor Christiansen picked off Mancuso.

The Spiders posted their second touchdown drive taking less than one minute. The Phoenix were backed up on their own two-yard line when Thomas fumbled the ball and as a number of players dove for the ball, Richmond’s junior defensive back Daniel Jones was the first player to gain possession. With the best field position of the day, the Richmond offense only required two plays before Dyke tacked on his second rushing touchdown on the day for the Spiders, tying the game 21-21.

Thomas took over the third quarter and had a back-and-forth with his opposite, Dyke. Thomas took a handoff through the line of scrimmage, hurdled his own lineman, and broke the threshold for a 29-yard touchdown, creating a 28-21 lead before the points were taken off the board because Thomas stepped out of bounds at the half-yard line. On the following play, De’Sean McNair plowed into the endzone to reestablish the 28-21 lead.

After a bad mistake by the Richmond return man, fumbling the ball on his own half of the field, the Phoenix assumed possession of the ball yet again. Greene floated a pass out to Thomas on a wheel route up the sideline before he rushed into the endzone for a 35-21 lead, making up for the touchdown he was robbed up the drive before.

“If the defense does something than we always have an answer to it.” Greene said. “That’s what Coach Folmar always tells me. He says, ‘You have to prove that when they do something, you have an answer for it.'”

The Spiders used just five plays to go 83 yards and get right back within striking distance of the Phoenix. More blown coverage from the Elon secondary allowed freshman wide receiver Jarmal Bevels to walk into the endzone easily without a Phoenix in sight, making it 35-28 Elon.

Elon had a chance to put the Spiders away for good with roughly three minutes left in the game. After a big play from sophomore wide receiver Kortez Weeks got Elon deep into Richmond territory, freshman kicker Skyler Davis missed a 29-yard field goal to keep Richmond in the game. But Elon put away the game with their first sack of the game on fourth down to get the ball back in the Richmond red zone, with a chance to ice the game. Davis redeemed himself this time, connecting on a 37-yard field goal to give them the 38-28 lead, and the win.

“Seeing them step up into the role they have now has just been amazing. They work hard at practice," Baker said. "When Jalen [Greene] went in, we all had faith in him because we could see what he could do at practice. Same goes for both [Greene and Thomas], they’re both good, hard-working players.”

Greene finished his first career start with seven completions on 11 attempts for 205 yards, and ran for 79 yards. He also contributed three total touchdowns, two passing and one running.

Thomas, his counterpart in the backfield, ran for 150 yards on 27 carries, and had two touchdowns, one rushing and one receiving.

“When you work like this day in and day out, you tend to know what your body can do. My team asked me to step up this week and that’s what I tried to do for my team,” Thomas said.

“It’s a good win, all wins are good wins,” Cignetti said. “I think our team is emotionally spent, going to JMU and then to Delaware. ... Those are emotional games. We wanted to win but sometimes you just need a break.”

“It’s going to be nice having a break," Cignetti added. "I think our team needs a break, I think our coaches need a break too.”

Elon will get a rest this upcoming week for their bye week. This will give Greene time to further become comfortable in the starting quarterback role, heel up injuries, and to prepare for their next opponent. The Phoenix host No. 22 University of Rhode Island at home on Nov. 3.