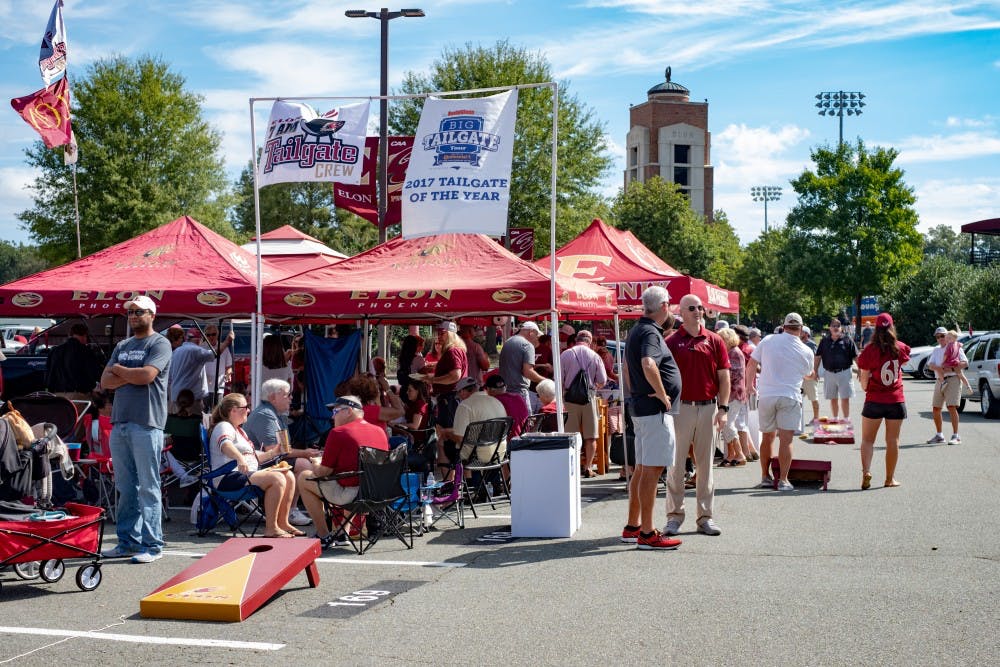 On the day of an Elon University football game at home, there are a few constants: The sun will rise, the stands will be filled with fans and the Elon 7 a.m. Tailgate group will have the grills going as they cook up some mighty fine food.

Since its creation in 2011, the Elon 7 a.m. Tailgate group has yet to miss a home game. Attracting family, friends and alumni, the group gathers in the Ingold Parking Lot in the early hours of the morning.

The tailgate is dotted with televisions, speakers, smokers, side grills, preparation stations, tents, sides and a lot of fun. The welcoming and inclusive atmosphere makes people feel as if they are a part of something bigger. It’s about more than just food or football – it’s about family.

Nothing embodies this feeling more than the Oakley family. While dad Dave Oakley is on the grill, his children, wife and parents are at home in the atmosphere that they have become used to over the better part of the last decade.

“He doesn’t cook at home,” said Sarah Oakley, Dave’s daughter. “It’s either Mom cooks or we eat out; this is saved for Saturdays.”

When they were asked what the best food served at the tailgate is, a near fight broke out. Boston Butt, ribs, beef tenderloin — it was hard to choose from. But Dave’s mom, Carol Oakley, summed up the general consensus from the crowd: “We like anything.”

This entire effort was started by a group of men united by their love for the university.

The tailgating group went to many games before they officially became a group. They all worked in the area and they loved Elon. Brian Martindale, the group’s social media coordinator, said, “We said ‘Ah, let’s just tailgate.’ And so we tailgated, and a few years later, we got introduced to David Oakley, and we joined together, and we been doing this since seven years ago.”

They started across the street in the Hunt Softball parking lot, but when Elon saw the group was drawing a crowd, they were invited closer to the action. With the crew now even more visible, located right next the stadium, the group rarely goes unseen on game day.

Martindale has only missed two games. One was the day after he had surgery, but he will contest to fellow pre-game revelers that he was still there, though heavily
medicated.

“It was elective surgery, and I was heavily medicated, but I did drive by, so I officially showed up,” Martindale said.

Other individuals’ excuses for missing tailgates include events such as a daughter’s wedding and a once-in-a-lifetime golfing trip to California. But the group has never missed a home
kickoff.

The groups hard work and commitment has paid off (though they said they aren’t doing this for the accolades or the recognition). In 2017, the David Glenn Show’s “Big Tailgate Tour” named the morning crew the best tailgate of the year in the state. Though that disqualified them from ever winning the title again, it is something that the group holds near and dear to their hearts.

“That was a big deal last year when we won,” said Mike Cross, chair of the Phoenix Advisory Board and a member of the tailgate. “We finished second the year before [to N.C. Central].”

With close to 50 games now under their belt, the tailgates have come with their share of surprises.

When Hurricane Matthew bared down on the east coast Oct. 7, 2017, Elon’s contest against the University of New Hampshire was moved up 24 hours earlier to a Friday kickoff. Without fail, the 7 a.m. crew was still out on the pavement grilling up some food and listening to music. A class day for most students, marked the beginning of a three-day weekend for the
tailgate crew.

Elon’s 2013 game against Appalachian State also stood out to the group. That Sept. 21 meeting still holds the record for the largest crowd at Rhodes Stadium when more than 14,000 people squeezed onto the bleachers. The group estimates that they fed close to 100 fans during the tailgate.

Though the team regularly feeds between 110 and 130 people during home games now, five years ago, it was a big deal to break triple digits.

Though debates will rage on about the music selection, the best food or football across the country, the debate over who is having the most fun on game day starts and ends with one answer: the 7 a.m. Tailgate crew.