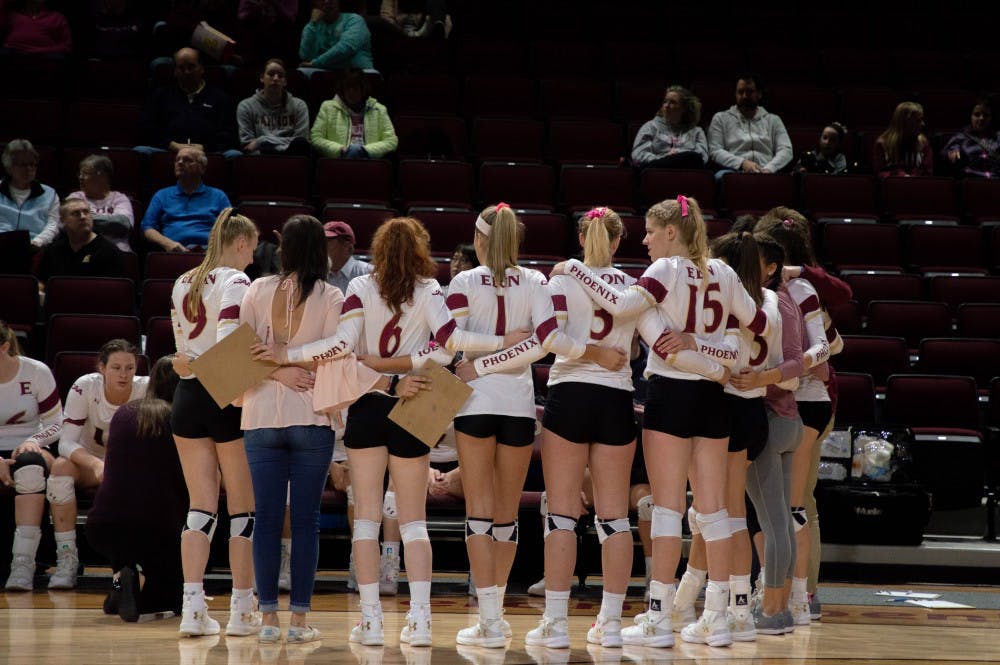 The Elon Volleyball team huddles during a timeout in the first set on Oct. 26th in the Schar Center [Staff Photographer Zachary Ohmann].

Elon University volleyball (13-10, 4-7) lost in straight sets Friday evening to the Northeastern University Huskies (13-11, 6-5). This was the Phoenix’s second loss to the Huskies in less than a month, snapping their five-game winning streak. For the Huskies, this is their second win in a row, after having dropped their previous three.

“In the CAA, every team is really tough and tonight Northeastern played really well in all aspects of the game. They executed well and we did not which will lead to a lopsided loss for us,” said head coach Mary Tendler.

Freshman outside hitter Leah Daniel was proud of her team’s tenacity in the second set.

“As a team, we talk about fighting, and that’s something we really did well tonight,” Daniel said.

The loss signals the end of a winning streak for Elon, and hopefully the beginning of a new one when the Phoenix host Hofstra on Sunday. The team has been prone to runs this year, coming out hot in the first part of the season before hitting a cold stretch, only to once again bounce back to win five straight.

“That’s volleyball.” Tendler said. “You have that all the time, you have that in one set alone, or one match, and it has happen with our season. So I told them in the locker room was that, ‘Hey, they played a better game than us and we lost, and now we have a team coming in that’s higher in the CAA on Sunday.’ So we just have to get ready for them and get rid of that because we can play a lot better. We can beat any team in the CAA; we just need to try and switch gears here and learn from what happened tonight.”

The Phoenix will be hosting Hofstra University (18-7, 8-3) this Sunday at 12 p.m. This will be the end Elon’s three-game home stretch as they head on the road for the next three games after Hofstra. Though the Pride could be a tough matchup, freshman outside hitter Leah Daniel is looking forward to the matchup.