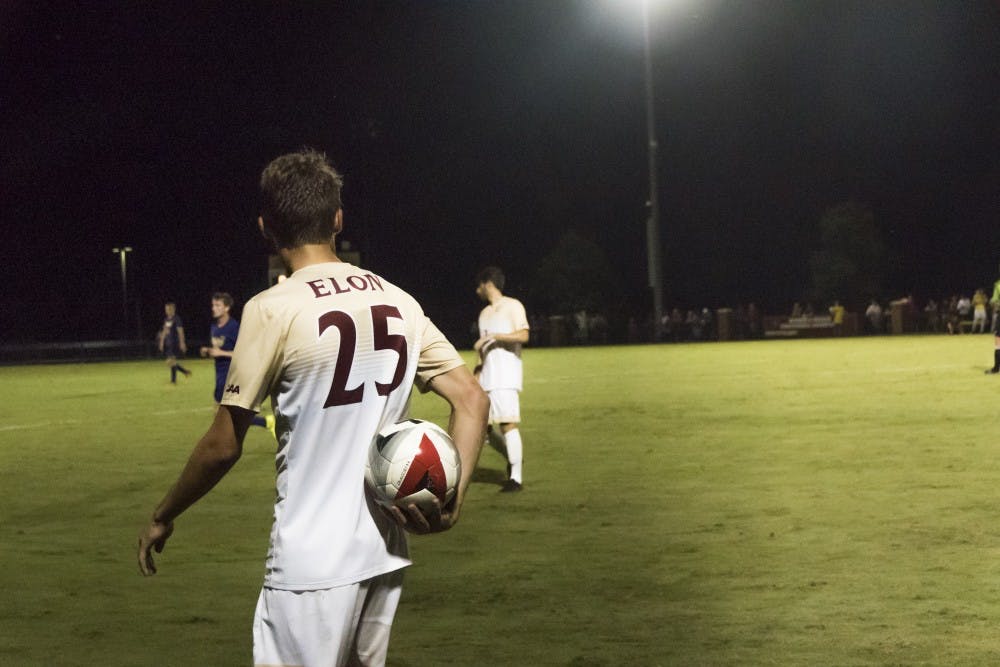 The Elon Phoenix (4-8-2) celebrated senior night by taking on Hofstra University (7-5-3) on Saturday night under the lights. The Phoenix were unable to pull out the victory, finishing the year winless at home. Elon’s playoff hopes are gone as they needed a win to qualify for the tournament.

The Phoenix immediately went on the aggressive getting their first shot on goal in the third minute. But Hofstra proved how dangerous it can be on the counter attack almost scoring, if not for a defensive stop by redshirt junior defender Hassan Pinto.

Early the Phoenix had used forward Inigo Bronte’s size to hold the ball up front to give his teammates time to get into an offensive position. The Pride continuously used their ability to throw the ball long to penetrate the box.

Halfway through the first half, either side had much success offensively with both sides only having two shots on goal each and none of those on target. The Phoenix did have some promising chances, trying to use their superior size by playing the ball into the box through the air.

Following a foul on midfielder Amir Berkane, Elon played it quickly to defender Asger Andersen, who brought the ball up to the corner of the box, almost uncontested. He would then pass it wide, which would set up a cross that would just missed Berkane’s foot, which could have broken the deadlock.

The Phoenix had the opportunity to open the game up on a corner kick that was saved by Hofstra goalie Leo Arkhanhelskyi.

At the end of the first half the game remained scoreless. Despite some promising chances for Elon, they could not find the back of the net.

In the 47’ the Phoenix redshirt junior midfielder Nick Adamczyk was taken down in the box, earning a penalty kick. Bronte would take the penalty, hitting Elon’s first goal of the game.

The Pride would get an equalizer in the 64’ on a shot that just curved into the goal by Lennart Seufert.

Hofstra would seal the game in the 78’ with their second goal of the game, scored by forward Luke Brown. This stroke of bad luck has been a staple this year for the Phoenix.

Elon goalkeeper Mattew Jegier had a few words to say about Elon’s misfortune this year.

“Looking back at this season, we have had a lot of bad bounces that haven’t gone our way, a lot of overtime goals … but at the end of the day I’m proud of everyone,” Jegier said.

With their playoff hopes on the line, the Phoenix kept up the pressure desperately searching for an equalizer. But despite their best efforts, they were unable to come up with a goal.

Despite the heartbreaking loss, Adamczyk sees a lot of potential for the team next year.

“The younger guys coming in, there is definitely a lot of potential. … A lot of guys stepped up to the plate," Adamczyk said. "Next year, we will be a little older, which will be good, and hopefully we will get the pieces together.”

The Phoenix finish their season next Sunday at James Madison at 7 p.m. The Phoenix will try to close out the season on a high note, despite not being able to make the playoffs.