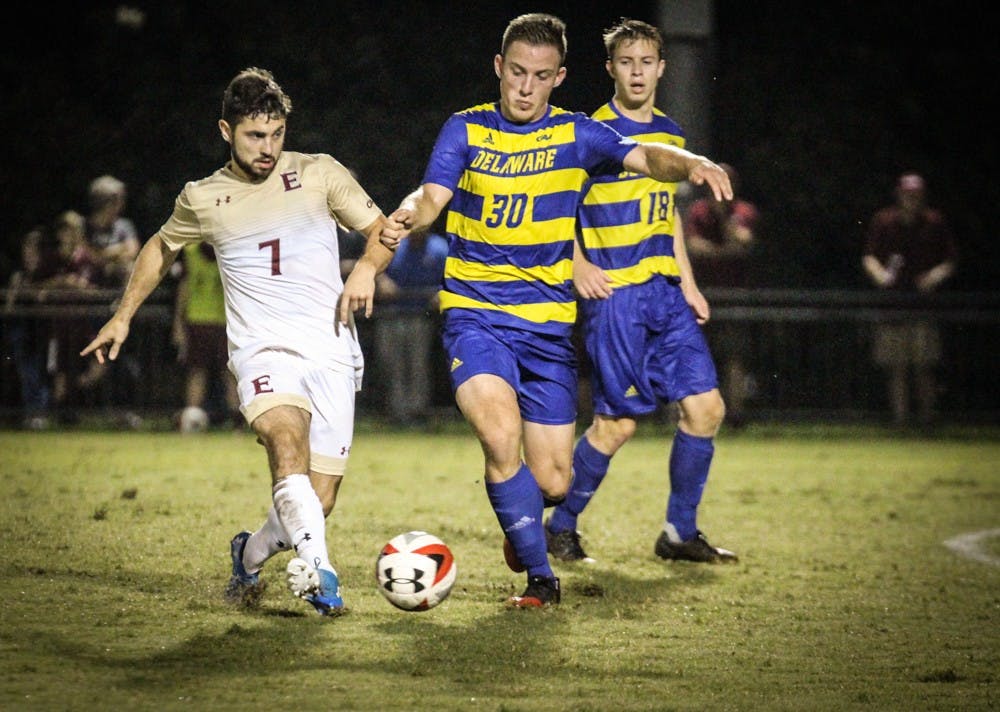 The Elon Phoenix (3-6-1) could not equalize the Blue Hens of Delaware (3-7-0) after a goal midway through the second half broke the Phoenix positive drives. Evident throughout the match was the team's intense desire to win its first Colonial Athletic Association (CAA) conference game this year, but with a low shot count of seven, only one on target, the Phoenix did not come out with the outcome they needed.

Despite an absence of goals within the first 15 minutes of the game, multiple runs were made by both teams, pushing hard to put an early goal on the board, a crucial advantage as the first team to score has won all but two of Elon’s nine matches.

Every Delaware attacking run was quickly thwarted by the Phoenix defense and countered with a run of its own. This back and forth action continued for the majority of the first half. Even with its runs, the Phoenix couldn’t seem to piece things together and never quite seemed to be on the same page, resulting in a few frustration outbursts from the sideline and the pitch. Elon’s second-year head coach, Marc Reeves, says the team is “just lacking a little bit of discipline in certain areas,” a direct cause of some miscommunication between Phoenix players on the field.

After an uptempo and aggressive first half, the match remained scoreless between the conference competitors. The two teams totaled almost three times the amount of fouls to shots.

With the team is now still without a conference win, Reeves knows just how hard it is to break through in this conference. “It’s a tough league, and if you don’t do the right things the entire time, you get punished,” Reeves said. Fifth-year senior keeper Matthew Jegier added, “There are no easy teams in our conference.”

The Phoenix came out of the locker room firing. Redshirt-junior Iñigo Bronte made a run down the middle of the field into the Blue Hens’ defending third, yet an errant touch off the foot of Bronte abruptly halted the Spaniard’s attack.

The Blue Hens’ finally found a worthy shot attempt off the foot of freshman defender Timo Hummrich after the ball bounced between teams before finding itself at the cleat of Hummrich. Hummrich recorded his first goal of the season on this shot, sending the ball from the right side of the box to the left side netting, out of reach of the diving Matthew Jegier.

A controversial moment in the last 15 minutes of the match as a Blue Hens player stood directly on top of a Phoenix free kick, Marcel Fahrenholz taking the kick as the defender stood on top of the ball hoping for some sort of call from the referee, but no such call was made. Both coaches received an explanation for the call but Reeves was not too happy.

An eventful final minutes of pressure from the Phoenix led to a few scoring chances, all to no avail.

Moving forward the Phoenix know that the season is not lost, with 12 points still up for grabs in conference play.

“When the season’s over, when it’s mathematically impossible for us to win, then sure, we can give up,” said Matthew Jegier.

With a full week to recover and prepare, the Phoenix look for a bounce back win against the perennially competitive UNC-Wilmington Seahawks (7-2-1) in another home conference meeting.