On Oct. 18, Connie Book will be ceremonially inaugurated as Elon University 's ninth president. Elon News Network will have continuous updates throughout the weekend. 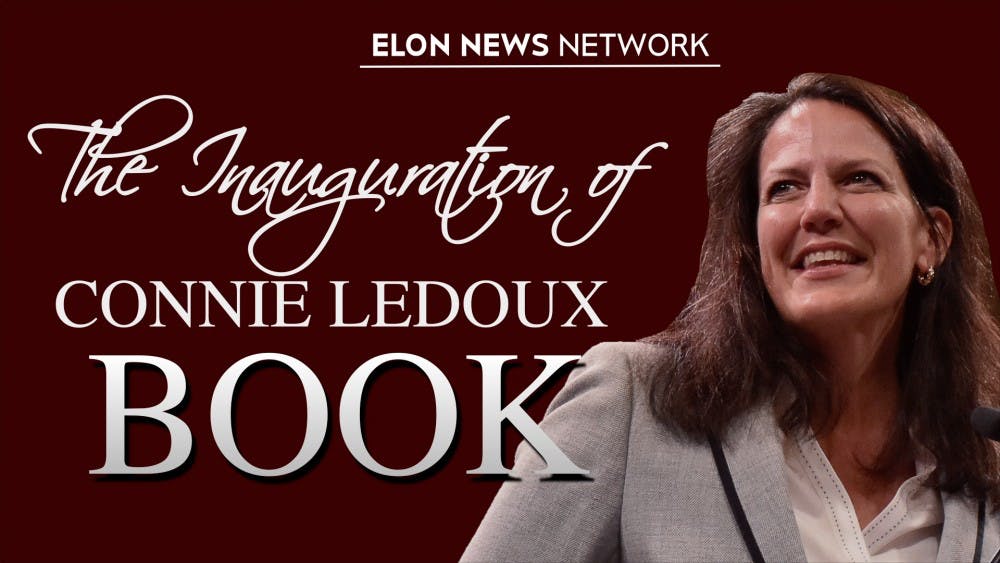 The last time a president at Elon University was inaugurated was in 1999. Most freshmen on campus now were not even born then. As the campus pauses to reflect on Connie Book's ceremonial start to her presidency, Elon News Network will have continuous updates of her speech and events around it during the day. Starting at 2:45 p.m., tune in to ENN's special report of President Connie Book's inauguration ceremony, and continue to check this page for updates throughout the weekend.

The Phoenix beat the University of Richmond Spiders 38-28 at Rhodes Stadium on Saturday during Inauguration Weekend. Full coverage of the game can be found here.

On Friday, faculty and staff presented their research and expertise to the community in an "Elon Talks" forum. Read more here.

Trustees, donors, faculty and staff gathered at the Schar Center again on Friday for the dedication of the new arena. The arena serves as the home for Elon's men's and women's basketball teams and volleyball team, as well as campus-wide events, such as President Connie Book's inauguration and commencement. Ed Doherty, chair of the board of trustees, even said the arena had the potential to host a presidential debate.

"As you saw yesterday and you saw today, you can't walk into this arena and not be awestruck," Doherty said.

Donors' families who contributed to the project were in attendance, including Dwight and Martha Schar, whose $12 million gift spearheaded the construction of the 5,100 seat arena.

Book focused her speech on what it takes to build a successful community and how she wants that to be a cooperative effort at Elon. Here is a full transcript of her inaugural address.

"Our hearts are bursting with pride for the future."

The choir sings the alma mater.

Book announces 12 new DeJoy-Wos Scholarships in the Odyssey Program for Title I schools in Greensboro.

"They built this university on the power of a committed community," Book said.

Book refers to University Historian George Troxler's work, From a Grove of Oaks, The Story of Elon University, saying Elon rose to its successful status because of consistency.

Book talks about the story of Isabella Cannon '24, who became the first woman to be elected as Mayor of Raleigh, saying it is one of the stories that inspires her.

Book recalls a story when she was fitted for her military uniform at The Citadel. The seamstress did not want to alter it to make it more comfortable. "It would make me lose my credibility" because she would have worn it incorrectly, she said.

Book takes the podium and begins her inaugural address. She speaks in depth about her experience at The Citadel and how it was a "Liberating Act" because that experience to become better changed her, she said.

Book takes the oath of office at the podium with her family. Ed Doherty, chair of the board of trustees, administers it, saying she has a duty to lead for the people who study and work at Elon.

Lt. Gen. John W. Rosa Ret., former President of The Citadel, introduces Book. He says she "set the gold standard" for a college provost and that hiring her was one of his greatest achievements and that she also made him a better president.

Trustee Noel Allen '69 says he thinks Book can be the best Elon president ever. He also challenged her and everyone in the audience to lead together "courageously, creatively and in ways we hadn't imagined."

Trustee Noel Allen '69 is now addressing the audience. Allen has been on the board since the late James Earl Danieley's presidency. He was also the chair of the search committee that selected President Emeritus Leo Lambert.

President Book has just sat on the stage. The invocation is now being said.

With a half hour until the ceremony begins, community members take their seats.

Below are enterprise stories looking into Connie Book's past, her responsibilities and what she does in her presidential role: