Despite key saves by goalkeeper Estrada, Elon is unable to find the net 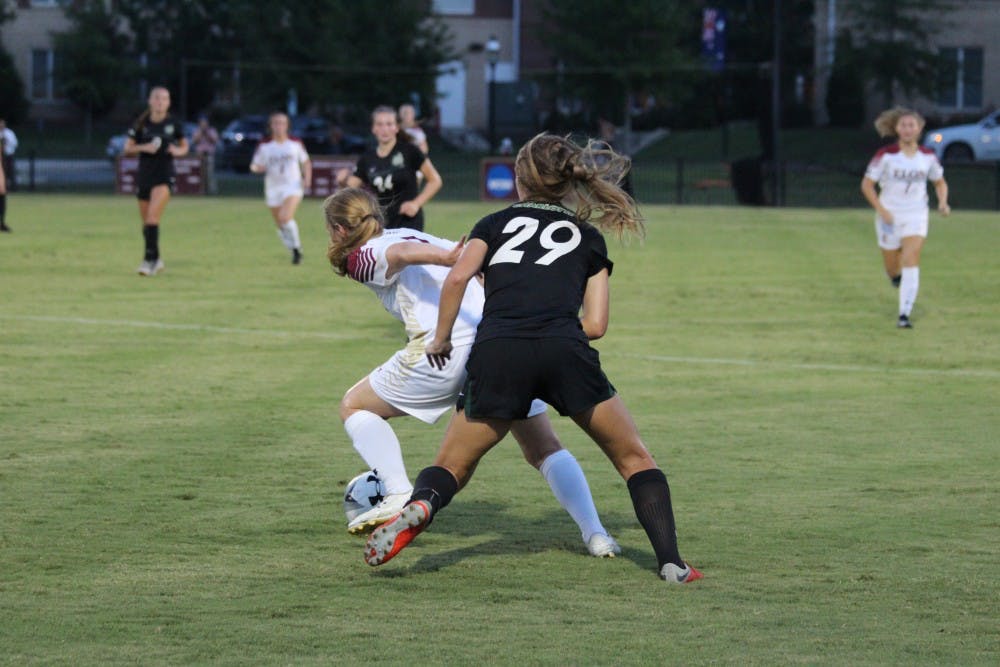 Elon University's women's soccer team fell to the University of North Carolina at Charlotte 49ers at Rudd Field on Thursday night. With a 2-0 loss, Elon fell to a 2-2-3 record, and Charlotte improved to 4-2.

The 49ers slowly began to take control of a fairly even game around the 20-minute mark of the first half. The long through balls began to wear Elon's defense down, and Charlotte finally broke through in the 33’ when junior midfielder Jamie Fankhauser finished a cross from junior forward Julia Grainda.

Though it was a hot and sticky night to play soccer, first-year head coach Neil Payne wasn’t going to let his team off with that as an excuse for their play. “It was the same for [Charlotte],” Payne said.

Despite allowing the goal, Elon's defense worked together to keep the score close, saving three more shots by the 49ers, and finished the first half down 1-0.

Payne didn’t mince words when talking about the first half of play. “It was probably the worst half this team has played so far this season,” Payne said.

Disaster nearly struck for Elon as the 49ers were awarded a penalty kick less than two minutes into the second half. Charlotte's freshman midfielder Sandra Geiselhart stepped up to the spot to face off with Elon's sophomore goalkeeper Valentina Estrada.

Estrada clearly took exception with the foul being called, but it was Estrada who got the last laugh. The keeper guessed correctly, diving and making an outstretched save to the left, keeping Charlotte at bay.

“Sometimes you just get lucky,” Estrada said of her spectacular penalty save. “I just read it right, and I got it luckily.” Estrada ended the game with four saves.

Elon was able to gain some momentum early on in the second half, but the team was unable to capitalize on its chances. Before the Phoenix could even the score, junior forward and captain Megan Greene found the back of the net to put Charlotte up 2-0, and the 49ers went on to win the game.

“Athletically, I think they were clearly bigger and stronger,” Payne said. “It was physical, and we didn’t adjust to that early enough.”

Estrada gave credit where credit is due. “Tonight, I think Charlotte played a really good game; you can’t really blame the defense,” Estrada said of the 17 shots from the 49ers.

“We were inviting too much pressure,” Payne said. “There was opportunity to get out of that pressure, and we’re capable of doing that, but we just didn’t apply that tonight.”

Now sitting with an even record on the season, Estrada said the team just needs to keep working and get ready for Colonial Athletic Association (CAA) play, which starts on Sept. 20.

Women's soccer will be in action again on Monday night when they face Radford University under the lights at Rudd Field.