Local shelters open their doors to those affected by the storm 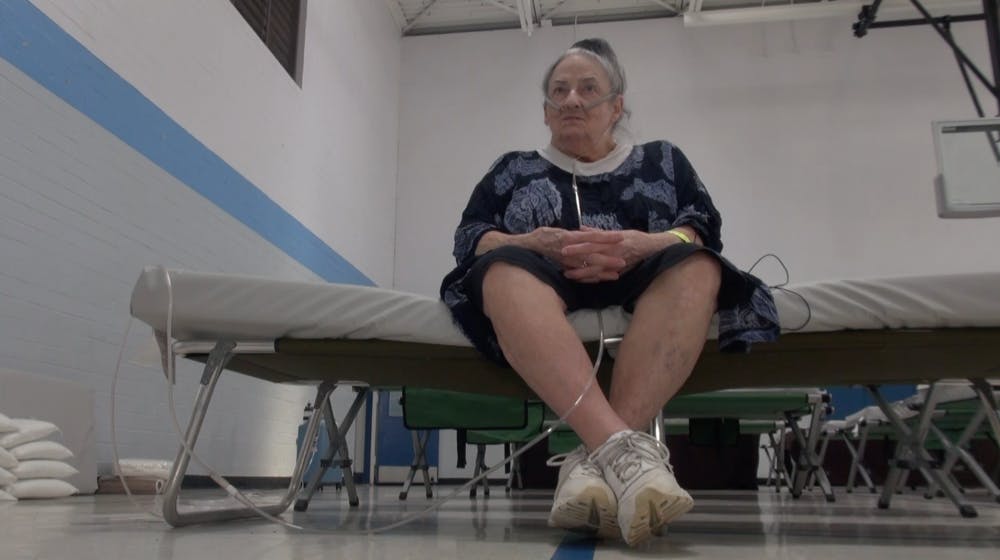 The Red Cross is operating about 150 emergency shelters in North Carolina for evacuees of Hurricane Florence.

Over the weekend, the Red Cross consolidated its two Alamance county shelters into one, located at the Graham Recreation Center.

According to the director of the shelter Gail Barnetti, the move consolidates resources in one space. The Burlington Fairchild Community Center was closed on Saturday because there was no air conditioning, and The Lamb's Chapel in Haw River was relocated to Graham because it had more space.

The Graham center can hold more than 200 people in it. On Sunday night, 51 civil air patrol cadets stayed in the shelter, but they've since left for the coast to drop pods of food and supplies to people who are stuck in flood zones. On Monday afternoon there were about 20 people staying in the shelter, three of whom came from the coast.

Barnetti, a volunteer with Red Cross, is in charge coordinating volunteer efforts for the shelters. She said The Lamb's Chapel saw an influx of locals on Thursday and Friday nights.

"Most of the locals we had lived in mobile homes parks with a lot of trees, and they were very very concerned about trees falling and the tremendous amount of rain they were expecting and the flooding."

Barnetti says when they relocated the shelter from The Lamb's Chapel to Graham, many of the locals went home.

Now, she says they're seeing clients who were impacted more severely from the storm.

"It’s been fun, if you can say a disaster can be fun like this," Van Riper said.

She left her apartment, where she lives alone, on Thursday night because her family was nervous for her and she was worried about trees nearby falling down. She says she loves the community of caring the staff have created, and it feels like the a level of peace and love from the sixties.

"It’s good for the heart to see so much caring and love in one building under one roof, other than church, because you sure don’t see that when you go to the market," June said.

Although the circumstances are grim, she says her spirits stayed high.

"Talking to the the children, they look like there’s nothing wrong in the world they are as happy as can be," she said.

Van Riper says watching the workers has been impressive, and she feels she's learned from it.  She says the workers set up cots in the night like ninjas, not even waking her up, and is impressed by how organized and in sync they are.

"Language wasn’t needed because they just knew what to do and they were going back and forth like this just like ants do in a colony," June said.

Barnetti says the coordination is a community effort. Local restaurant have donated meals, Walmart donated pillows, and the county donated blankets. A mix of red Cross volunteers, paid county employees, and social workers are all working to run the shelter smoothly.

Barnetti says they can always take more donations, especially blankets and new clothes. If you'd like to help, call Barnetti at 336-213-2013 and drop off donations at the shelter.

The shelter will be open Monday night, but Barnetti says she is unsure about the future: they'll stay open simply until they aren't needed anymore.

"The general public needs to understand that anyone can stay with us, it makes no difference who it is," Barnetti said.

In order to stay you need a photo ID. Once inside they heavily protect sheltergoers' privacy--they don't release names to any third parties, but if a family comes looking, they can leave contact info and let the person staying in the shelter choose whether to contact them or not.