Elon's penalty kick, which was saved by Delaware, would have been crucial in conference-opening loss 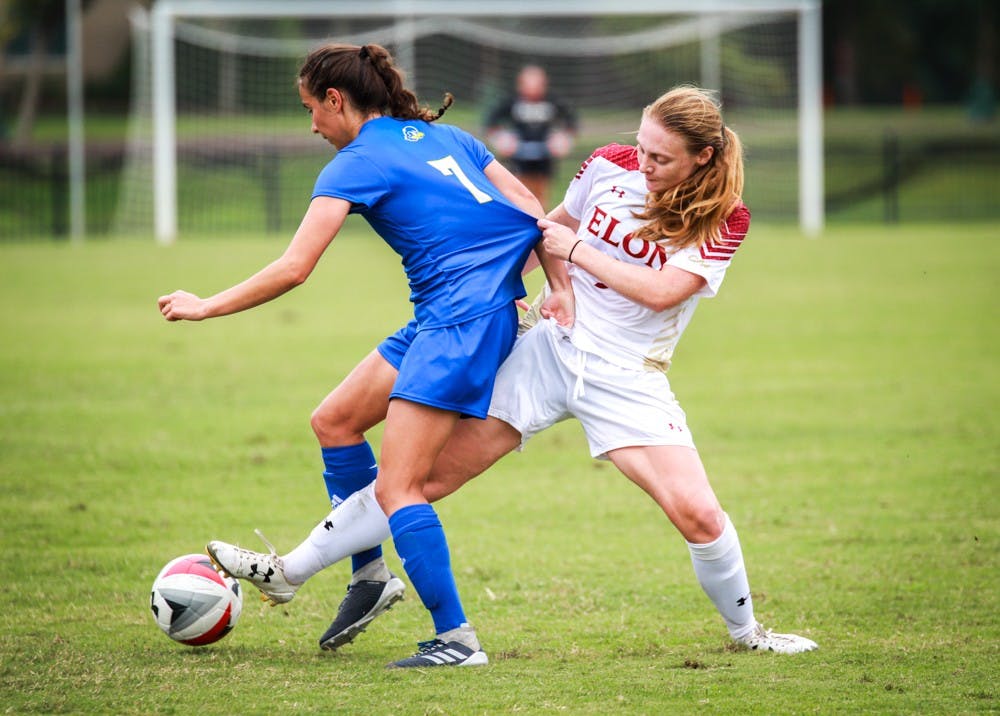 Elon University’s women’s soccer team (2-4-3) lost 1-0 in overtime to the University of Delaware (2-7-1) in its first Colonial Athletic Association (CAA) conference game of the season after the matchup was previously postponed in Wilmington due to Hurricane Florence.

The game was physical from the beginning. Delaware’s defense pressed the Phoenix hard through regulation and an overtime period, committing 14 fouls in the process. The Phoenix defense was stout as well, limiting the Blue Hens to only six shots on goal. The deadlock between the CAA opponents persisted until Delaware junior forward Dani Kabat fired a penalty kick past Elon’s goalkeeper, ending the game in sudden death.

After Elon’s freshman forward, Grace Kiser, took a shot at goal in the ninth minute, the game experienced a drought, not seeing a shot from either team for a 15-minute stretch. Redshirt-sophomore midfielder Hannah Doherty seemed to be the main controller of pace for the Phoenix as she was not easily knocked off the ball during the first half.

The teams combined for 11 fouls in the first half, with eight coming from the Blue Hens. Yellow cards were awarded to players from both teams, with one on Doherty and another on Delaware's Damali Simon-Ponte.

“I thought it was a lot different than our preseason games. They were very aggressive from the start,” Doherty said. “I thought first half, we coped really well with it; our movement was great off the ball, which moved them around a lot. I think midway through the second half, we kind of switched off of it.”

Late in the first half, junior forward Taylor Paradoski earned a penalty kick for the Phoenix after being slammed between two Delaware defenders. Freshman defender Lily Harkes took the penalty kick, which was saved by the Delaware goalkeeper after diving to her left and knocking the shot wide right with her outstretched arms. The kick would prove to be Elon's best opportunity to get on the scoreboard.

Attempting to break the stalemate, the Phoenix came out firing in the second half, tallying three shots within the first five minutes.

First-year head coach Neil Payne called it “a symptom of them dropping off a little bit.” A promising attack early for the Phoenix at the start of the first half resulted in a header attempt at goal by Harkes before stalling out due to an offside call on junior forward Laura Mitchell.

Doherty continued pressing for the Phoenix throughout the second half and presented two opportunities, one via shot on goal and the other via a long run down the middle of the pitch. While neither chance worked, Doherty’s sustained pressure kept the Blue Hens on their toes.

“I think because they were so aggressive, they had a lot of gaps that we exposed pretty well when we kept the ball on the ground,” Doherty said.

With no true final push from either team, the Phoenix and Blue Hens entered overtime locked in a scoreless tie.

In only four minutes of overtime play, the Blue Hens’ leading goal-scorer, Dani Kabat, striped a shot from the left side of the box to the upper-right corner of the goal, just out of reach for Elon’s goalkeeper, Valentina Estrada. Kabat’s goal upped her tally to three goals on the season, ending the match in dramatic, golden-goal fashion.

Moving forward, coach Payne said, “We’ve got to regroup, probably look to change some things around. The mental lapses are becoming a theme, and we got to look for personnel that will eradicate the mental lapses.”

The Phoenix will have three practice days before meeting the College of Charleston Cougars (6-5) on Thursday for their second conference match.

The studio came to life through the work of Campus Recreation & Wellness and the Department of Performing Arts and was inspired by the direct benefits that Pilates provides to dancers.