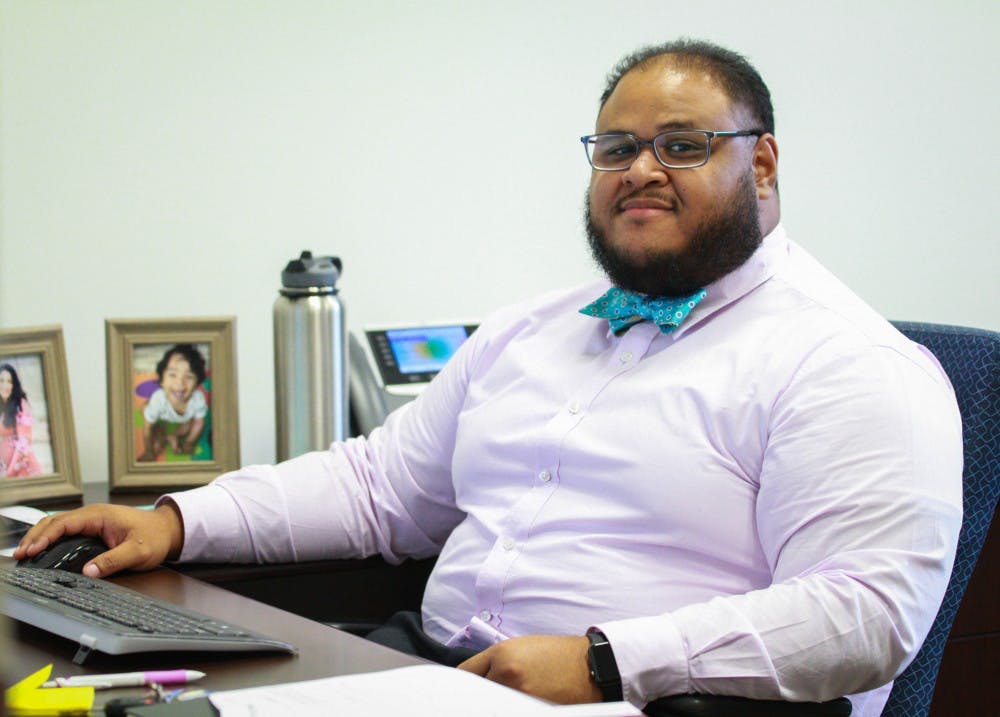 In his house, working hard was never an option. Tyrone Jean, assistant dean of students and director of the Center for Race, Ethnicity and Diversity Education (CREDE) at Elon University had this message instilled in him from a young age by his mother, born in El Salvador, and father, born in Haiti.

“The messaging that I received growing up was centered around my cultures, around my race, and so I constantly got messages from them about having to work harder, having to prove myself – not for me, but for others,” Jean said. “Those messages sort of stuck with me all throughout my own college experience.”

When it was time to set off for college, Jean tried a few majors before settling on African-American Studies where he could dive deeper into his passion of exploring identities – particularly
his own.

He later pursued a Master’s degree in Educational Leadership and Policy studies at Virginia Tech, during which time he took every chance he could to write about and learn more about people of color. His interest and passion in exploring race and ethnicity sprung out of these experiences and only strengthened over time.

“I think within the past 8-10 years, it’s really more about looking at outcomes,” Jean said. “When you think about race and ethnicity, and you look at outcomes across racial lines in terms of healthcare, the criminal justice system and education, blacks, Native Americans, indigenous folks and Latinos tend to still be on the lower end in terms of racial outcomes.”

For Jean, it’s a larger systemic issue that needs to be addressed and he has committed himself to breaking down some of those barriers through his work as
an educator.

While he’s only been at Elon for just over a year now, his impact has already been felt through campus.

“I identify both as Latino and as black,” Jean said. “I never use percentages. I don’t say I’m 50 percent this or 50 percent that. I am fully Latino, and I am fully black. For some people that might be challenging to understand as a concept, but that is not my challenge to deal with. I know who I am.”

“I think what has been very important to me and I think it has been important for me to self identify openly with a variety of different students because I think my experience of self-identification gives permission for others to do the same,” he continued.

Junior Megan Hernandez-Greene, who identifies as Afro-Latino, says having Jean as a support and resource has been instrumental in her journey toward exploring her own identity. Hernandez-Greene says both Jean and Sylvia Muñoz, associate director for the CREDE, helped her find language that she had not identified previously to describe herself.

“I would always tell people ‘I’m half Mexican, half black,’” Hernandez-Greene said. “Sylvia was actually the first person to tell me, ‘You’re not half anything – you’re both black and Mexican,’ and that just really hit home for me because I feel like society pushes the whole thing, the making of different numbers – you’re 50 percent this, 50 percent that. It doesn’t make sense.”

“To hear that from her and Dean Jean, and having those voices to tell me that, it meant a lot and really changed my perspective of how I saw my identity,” she said.

Hernandez-Greene says she understands the complexity of identity and that there may be a time where she finds new vocabulary to self-identify herself with, but that Jean and Muñoz have both been “safe spaces” to help her start some of
that exploring.

Hernandez-Greene was able to use the CREDE as a platform to organize some of her own events to bring together other self-identifying Afro-Latino students and hopes to continue to do so when she returns from her semester in Japan.

Last year she served as the vice president of the newly-formed Latinx Hispanic Counsel at Elon, where she was able to facilitate conversations about black communities in Latin America as part of the Black History Month programming.

“[The programs] brought up dialogue and addressed anti-blackness in the Latinx community that we are still progressing to have serious conversations about,” Hernandez-Greene said. “I think it is really starting with our generation. Things like that have given platforms to be able to talk about my identity and start conversations with people about their own misconceptions – even possibly helping them accepting their own identity.”

Jean says Elon’s commitment to having diverse and inclusive students, as well as the importance placed on global engagement, is what appealed most to him when he was looking into the position.

“I have not seen that at other institutions, or if I’ve seen it it’s been an espoused value versus a practiced value and at Elon I felt that it was both,” Jean said. “That’s not to say that we don’t have our areas of improvement that we need to grow in, but I think that Elon has position, the resources, the mechanisms, the people, the talent, to actually make some progress from this.”

Just last spring, one of the CREDE’s newest initiatives launched with the inaugural cohort of the Intercultural Learning Certificate program. Its goal is to allow students to take an “experiential deep dive into exploring issues of social justice, equity and inclusion,” and culminates with a capstone project. As of fall 2019, the program will be a requirement for School of Education’s teacher education program.

Jean has made a career out of a passion that grew inside him for most of his life and uses his personal experiences to educate and support others while also continuing to fight the systematic -isms that exist at Elon and in society as a whole.

“For me, a way to combat some of these -isms on an institutional level is to educate,” Jean said. “So, I chose education, specifically higher education.”