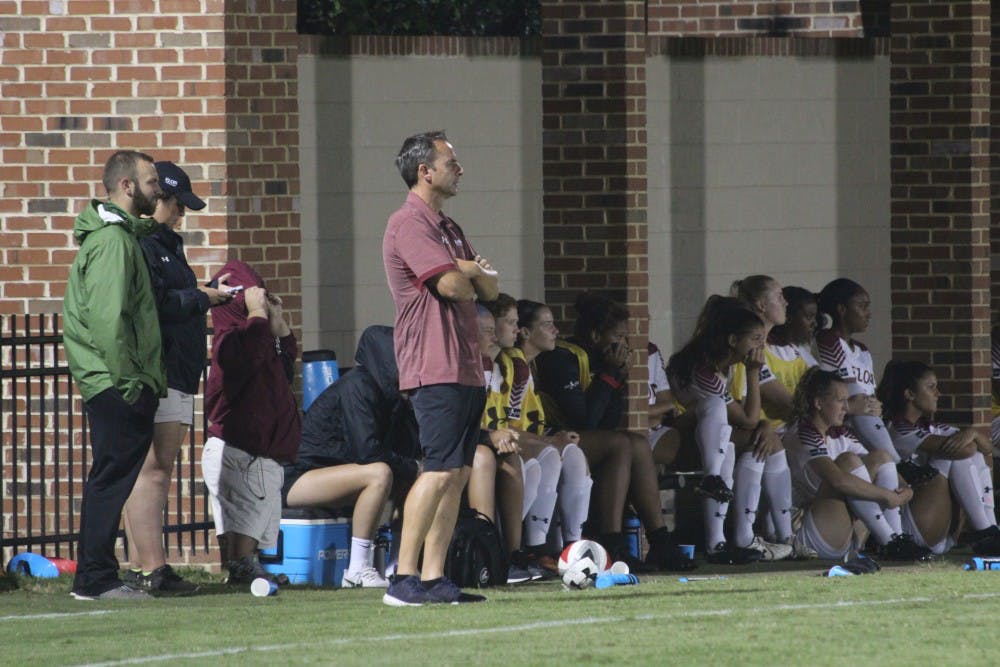 Photo by Samantha Steinman | Elon News Network
First-year head coach Neil Payne looks on in the rain on September 10, 2018 as his women’s soccer squad took on Radford University. The squad fell 3-1 on the rain-soaked pitch of Rudd Field.

Everywhere first-year women's soccer head coach Neil Payne has gone, he has won. Now it's time to see if he can continue his tradition of winning with Elon University.

Elon announced Feb. 24, 2018 that Payne would be stepping in to fill the role of head coach, replacing Chris Neal, who jumped ship in late January to join the coaching staff of the University of Arkansas. Neal had spent 10 years coaching the Elon women’s soccer team and left the program with a record of 90-76-31.

Payne has been successful since his days with Real Colorado, an elite youth girls' soccer development program, where he was the technical director for 13 years. He sent over 450 players from the club to play collegiate women’s soccer, and he passed 38 players along to the United States women's national soccer team.

Payne won in Texas, too. He joined the coaching staff as the associate head coach of the Texas Tech University Red Raiders in 2015. In his three seasons with Texas Tech, he saw the team earn back-to-back NCAA Tournament appearances and win the Big 12 conference for the first time in program history.

To fully understand the role that Payne is stepping into, we must first understand who he is coaching.

The Elon women’s soccer program has had moderate success in the past few years. Its most recent dominant year came in 2013, their last year playing in the Southern Conference (SoCon). That year, they went 13-3-6 and lost in the SoCon Championship game to the No. 1 seeded Furman University Paladins.

From there, Elon has seen its share of ups and downs. Elon saw a drop-off in 2014, their first year in the Colonial Athletic Conference (CAA), winning just five games in 17 tries.

Elon has had two winning seasons since joining the CAA, but neither was as strong as the 2013 season.

This is where Payne can really make a difference for the squad. He has proven every place he has been that he can win. Whether it was coaching youth in the Colorado or taking the Red Raiders to back-to-back NCAA Tournament appearances, Payne has shown he can win. One of the keys to winning that he has seen is that it doesn't come overnight. As a coach, Payne knows he must stay patient and build for the coming years.

Payne said “implementing a style that we need in the future" was the most important thing to build this year. “Along this process, we’re going to have a few bumps in the road. We’ve got to focus on the performance and focus on the style of play, and it will come eventually,” Payne said.

Payne has had an adventurous start to his Elon tenure. The Phoenix had to battle its way back against Liberty University to get Payne his first win in his new position. Down two goals with less than 25 minutes left to play, Elon needed a near miracle to even escape with a tie. Taylor Paradoski scored her second goal of the game to pull the Phoenix within one. Then, in the final seconds of the game, Elon was awarded a penalty kick. Olivia Kraebel stepped up and buried the opportunity. Paradoski finished her hat trick in overtime, and the Phoenix got into the win column in their first game.

That is a prime example of learning how to win. And Payne has been very clear in saying that he is not going to be grading Elon’s performance on a curve.

“I’m not going to lower my standards; they’re going to have to catch up. I think the biggest thing is getting them to understand where the standard needs to be, setting that benchmark, setting that level, and we’ve got to attain it,” Payne said of his team. “That’s probably the biggest change I’ve seen. They're more than capable, but it’s not something that’s going to change overnight; you’ve got to drip-feed it."

One of the ways Elon is going to need to learn to win is finding their physical presence in their play. In Elon’s 2-0 home loss to the University of North Carolina at Charlotte Thursday, Sept. 6, that was a big sticking point for Payne and his coaching staff.

“They were physical, and we didn’t adapt enough to that early. Our speed of play overall wasn’t quick enough. It comes down to a mentality, really. A mentality to get a hold of the ball and to have the confidence to play,” Payne said.

But even when the focus is winning and improving, Payne said he still recognizes the importance of keeping his team loose and making sure they are enjoying themselves. Although he won’t disclose what the drill is, Payne said the team has a sort of ritualistic set of drills they run through every game day that the team enjoys to help them stay loose.

Thus far, Payne has seen his ups and downs as head coach. After that thrilling overtime victory, Elon fell cold, playing to three draws and a loss to national No. 11 Duke University 3-0. They finally broke through again against the University of Richmond before dropping their next game to Charlotte.

One of the big things Payne pinpointed as something the team needs to work on is their ability to play against more physical teams and finish off goals.

“Teams are strong and physical, and the way we solve that is to move the ball quicker. I think another big thing is the end product,” Payne said. “That is something we need to get better at. We get in attacking positions, and the final ball or the final cross or the final shot isn’t as precise as the final choice."

Elon will have two more games to tune up before beginning CAA conference play. For Payne, this first run will be a true test of how much work he has cut out for himself in the coming years. But for now, instilling physicality and mental toughness is priority number one.