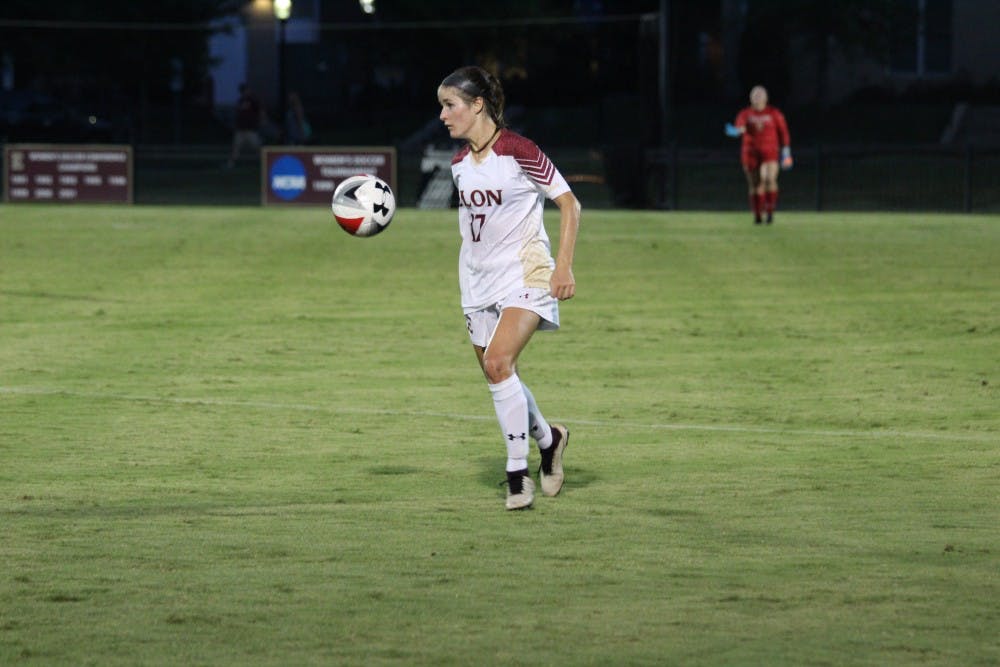 Freshman Abby Fusca controls a long pass while looking up to read the defenders. [Samantha Steinman]

At the beginning of the first half, the two teams traded possession back and forth. Charleston launched deep passes downfield. This aggressive tactic left room for the Phoenix to develop counterattacks along with deep balls of their own.

College of Charleston started with the ball in the first half of the game and kept it in Elon’s territory for a large majority of play.  Both teams played aggressively with the Cougars launching deep passes downfield and the Phoenix coming back with strong counterattacks.

The even scoreline was broken when Charleston's forward, Alyssa Beck, headed a high cross from outside the box down to the waiting feet of former CAA player of the week, Laura Ortega, who buried the ball into the top netting of the goal over the outstretched arms of Elon’s Valentina Estrada.

Another heart-stopping moment came in the 30th minute when another imposing cross from Charleston forward, Talia Colchico, came soaring into the box. Cougar defender, Sara Deutsch, elevated above the Elon defense on the right side and sent a bouncing header towards the bottom right corner. The promising take was knocked away by an outstretched Estrada and then quickly covered by the sophomore goalkeeper preserving the one-goal deficit.

“It was moving like in slow motion; it was a weird save. It was moving a little slower than I thought it would, then I got the initial touch on it, and I saw the girl coming, so I was like let me get up as fast as I can and jump on it,” Estrada said.

Until the end, the game was kept close thanks to the sophomore goalkeeper who rallied after the first half goal to tally a total 6 saves on Charleston's 7 shots on target, many of them coming in dramatic fashion.

“It's really the goal that gave me confidence in a way because I’m like I let one goal up I can’t let another one up,” Estrada explained. “So I’m just thinking let me get the next save and the next save. So it's not the saves that help me its that I can't let one in.”

In the second half, Estrada stood on her head making two more miraculous saves to keep the Phoenix's hopes alive down the stretch. The first came on a two-on-one breakaway resulting in a defiant save by Estrada who knocked the ball away from the Cougars and into the safety of her back line.

In the 82nd minute of the second half, it was again Estrada making another outstanding save. The Cougars were on the attack, and midfielder Kacey Smekrud fired a curling shot from outside of the box forcing Estrada to back up towards the goal. Then with one swift punch, she sent the incoming ball over the crossbar and out of play.

The second half of the match was filled with aggressive and chippy plays.  Both teams accumulated a large number of fouls. Elon ended the match with 9 and Charleston with 16.  Elon made more openings for themselves with close shots from junior forward Taylor Paradoski and senior forward Tori Baliatico.  The maroon and gold were also able to keep the play in Cougar territory with great communication and ball movement.  Ultimately, the Phoenix came up short in matchup due to their inability to finish plays.

Despite this being the second consecutive conference loss for the Phoenix, Coach Payne is remaining positive about the progress that his team has made this far.

“I'm not too worried about the score tonight; it was about the performance. They gave me a good performance. It was a good response from Sunday, and it's coming together,” Payne said.

The Phoenix take on the Towson Tigers Sunday, Sept. 30 at 1 p.m. at Rudd Field for their senior day game.