The Phoenix takes on an FBS opponent tonight in Tampa. 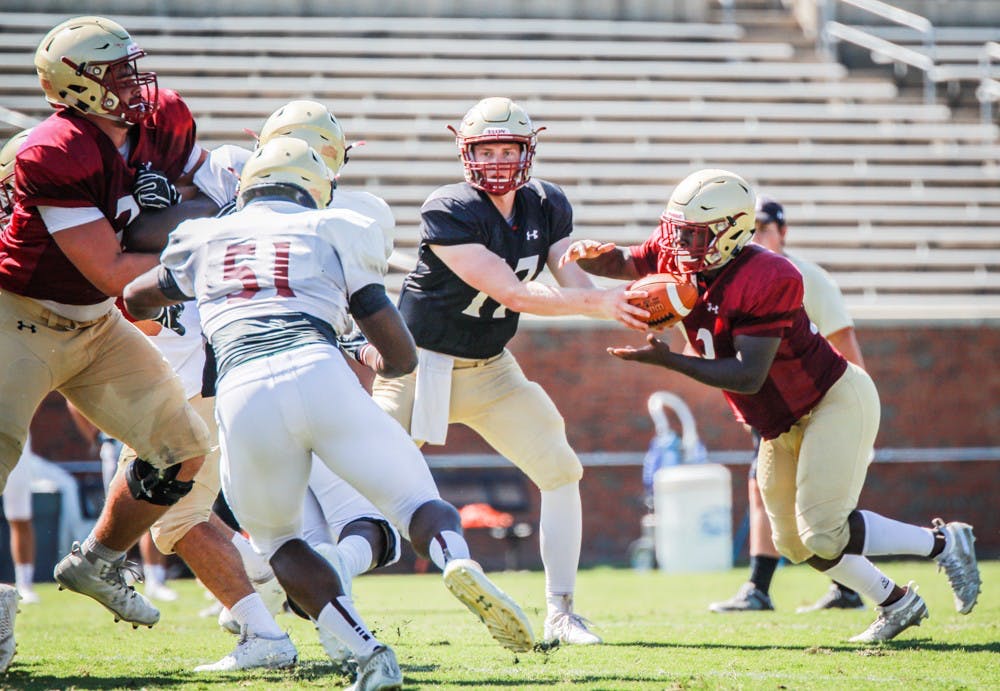 Quarterback Davis Cheek hands off the ball to running back Brelynd Cyphers during practice on Aug. 23. [Abby Gibbs].

The Phoenix is down in Tampa for their first test of 2018. After head coach Curt Cignetti catapulted the team to the top of the Colonial Athletic Association (CAA) in his first season at the helm, expectations are high. Elon starts the year with a No. 12 ranking in the STATS FCS Poll and has a handful of all-conference players returning to the roster. There’s a legitimate shot at a playoff appearance on the line this fall, but first the Phoenix must surpass its lone FBS challenge tonight.

History of the Matchup

The two teams have met three times throughout program history, with USF leading 2-1 all-time. They traded wins in the late 1990s but have only squared off once since Elon moved to Division I.

In 2007, USF served as Elon’s first-ever FBS opponent since the jump to D1. The Bulls came away with a 28-13 victory in their first game of a watershed season. Later that year, USF was awarded a national ranking for the first time in program history, eventually going 9-4. The Phoenix, still in the Southern Conference, finished the season with a No. 23 FCS ranking behind a record-breaking season from freshman quarterback Scott Riddle.

Historically, Elon hasn’t fared particularly well against FBS challengers despite plenty of chances to prove itself. This is the eighth time in nine years that the Phoenix’ first game on the schedule is an FBS opponent. Elon has never won against an FBS team, with its closest losing margin being a 41-27 loss to Duke in 2010.

Just like Elon, USF had a banner season under a first-year head coach last year. They finished the year ranked No. 21 in the nation after putting together a 10-2 record. However, they return to the field this year having suffered some major departures. The team lost four of its top five rushers, including offensive leader Quinton Flowers, who put up 1,078 yards in 2017.

There was some uncertainty in the quarterback position coming into the season, but Blake Barnett, a grad transfer who has played at Alabama and Arizona State, got the nod over two veterans. He’s untested in Tampa, but with big-time experience under his belt and a reliably physical receiving corps, he could be a weapon this year.

The Bulls saw some losses on the other side of the ball as well. Leading tackler Auggie Sanchez is gone from the team, leaving the linebacking corps looking young. There will be some experience returning to the team’s secondary, but last year’s intimidating pass rush probably won’t be on display, at least in the first game of the season.

USF has an uphill battle this year in an American Athletic Conference that keeps producing contenders, but Strong’s solid leadership should be able to pull together this year’s less-experienced lineup. While the offense may be less explosive and the defense less dominant than last year, the Bulls are still a physical team that likely won’t stumble against an FCS opponent.

The story of Elon’s 2017 success was largely written by the team’s offense. With then-junior running back Malcolm Summers putting up ridiculous rushing numbers before his injury and then-freshman Davis Cheek making a name for himself at quarterback, the Phoenix’ biggest difference-makers were on the offensive side of the ball. With both Summers and Cheek returning this fall, there’s a good chance they’ll be making an impact again. Against USF specifically, there could be some room to exploit any confusion left behind by departures in the defensive midfield.

So many of Elon’s victories last year featured last-minute scares from the opposition, leading to plenty of fourth-quarter nail-biters. There were times when it seemed like defensive lapses would be Elon’s undoing. This year, senior linebacker Warren Messer will be leading the charge to turn that around. He racked up 114 tackles and 5.5 sacks last year. USF offensive coordinator Sterlin Gilbert highlighted him as a major threat to his team’s offense in a midweek press conference.

Elon’s lineup is defined by its standout returners looking for another chance to prove themselves. USF’s lineup is loaded with questions about how new faces will perform. The Bulls certainly have the edge in physicality and preseason hype, but Elon is no stranger to creating surprises against opponents it had no business beating.

The two will clash at 6 p.m. tonight in Raymond James Stadium, where an Elon victory would require nothing short of a miracle. Regardless of the final scoreline, it’ll be a chance to see how Elon’s offensive stars look in their first time back on the field since an attention-grabbing 2017 campaign and how the defense will stand up against a more formidable opponent. If Elon can keep it together against its AAC foe in Tampa, there’s reason to believe they can go toe-to-toe with the top half of the CAA once the conference schedule gets rolling.