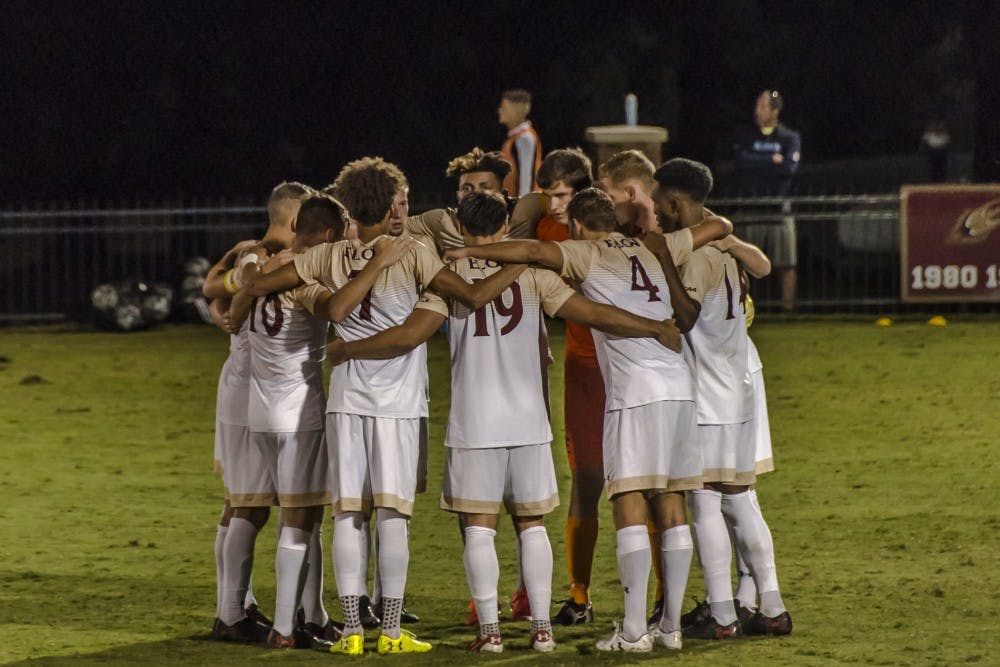 At Wednesday’s meeting of the Elon Phoenix (3-4-1) and the William & Mary Tribe (2-4-1), 90 minutes of regulation time and 20 minute of overtime was not enough to crown a victor.

The Phoenix started off the first half very aggressive despite the hour-long suspension due to severe weather within the area. Second-year head coach Marc Reeves said, “I think we came out lively and moved the ball well.” Within the first 11 minutes of the game, Elon had a chance to score from a corner but unfortunately, redshirt-junior forward Iñigo Bronte missed the open header resulting in a missed opportunity for the Phoenix.

The Phoenix hung tight with the defending Colonial Athletic Association (CAA) champions for the majority of the first half, and Elon slowly began to take control of game around the 40 minute mark. Though it was a hot and damp night to play, the Phoenix made sure to bring their “A” game.

Wanting to end the first half strong, the Phoenix fought for valuable points, but could not break through William and Mary’s defense. With 10 seconds left of the first half, freshman forward Devin McCarthy scored a goal against the Phoenix, ending the half with the score at 1-0. Elon’s senior goalie, Matthew Jegier, came out the goal in an attempt the stop the Tribe attack short, but McCarthy was able to chip the ball over the sliding Jegier, skipping into the back of the net.

A truly unlucky cap to a dominant first half for the Phoenix; however, coach Reeves said “No matter how much you’re dominating, you’re still going to give up a couple of chances.”

Coming out of the locker room, Reeves, called out from the sideline, urging his players to want the ball. Picking up the energy, the Phoenix accounted for three corner kicks, each resulting in shots, in a span of two minutes. Despite ample opportunities, the Phoenix could not net an equalizer.

After a few passes, Bronte found the ball at his feet and skipped it under the Tribe goalie’s outstretched body. Bronte’s 62’ goal tallied his fourth goal of the season and brought the score level at 1-1.

Earning himself a yellow card in the 67’, junior defender Luke Matthews allowed for a Tribe free kick just outside the 18-yard box. Unfortunately for the Tribe, the attempt was wide left resulting in a missed opportunity. After a frantic attempt to take the Tribe off the ball deep in Elon territory, the Phoenix defense was helped out by a Jegier save, ending the William & Mary attack.

Bronte expressed his confidence in his teammates saying that they “have played much better than the last games,” yet both teams could not quite make the mark late in regulation, sending the game into overtime.

An early shot in overtime by Elon’s redshirt-junior, Nick Adamczyk, sailed just over the crossbar, keeping the game in a deadlock. The stalemate continued, sending the game into a second overtime period.

The Phoenix broke a sweat while defending the goal attempt by the Tribe within the first four minutes of the second overtime period. Jegier would not break, sending the ball away three times from the persistent William and Mary. Neither team could pull off a win, resulting in a tie 1-1.

Coach Reeves said he thinks that “on another night [they] take a couple of those chances and come away with the win.” Bronte said that moving forward, “If [the guys] have with that conviction getting in the box, [they] will definitely get the results [they] have been looking for.”

The Elon Phoenix will travel north to Brookline, Mass. to meet the Northeastern Huskies this Saturday, Sept. 29 for their first road CAA test.